The aftermath of the Buffalo Bill fiasco is about to be revealed.

Clarice, CBS’ Silence of the Lambs sequel series, premiered Thursday, taking stock of FBI Agent Clarice Starling’s life one year after the events of the Oscar-winning Jonathan Demme film. While her life has been a hellacious cocktail comprised of one part media circus mixed with one part PTSD, Starling (this time portrayed by The Originals’ Rebecca Breeds) seems to have kept herself mostly in check… but she’s about to be thrown down yet another gruesome rabbit hole.

“I thought it was done. Buffalo Bill took seven women. He skinned six… six of them. I saved one. The last one. Catherine.”

We begin as flies on the wall of Clarice’s mandated therapy session, where she and a doc discuss how the media attention has affected her life and job. The psychiatrist inquires about her relationship with Catherine Martin, and mentions how her last “therapist” was criminally insane and ate his patients (this series is legally bound from saying the H-word). As he attempts to pry into Clarice’s relationship with Anthony Hopkins’ former madman, her defensiveness tweaks. He suggests she be kept out of rotation until she can heal from her PTSD, but before she can rebut, their session is interrupted. Ruth Martin, the Attorney General of the U.S., requests Starling’s presence on an urgent matter. 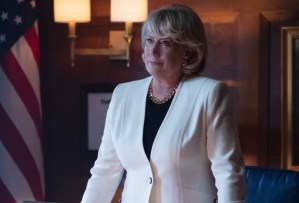 Martin tells Starling that two dead women floated down a river, each with multiple stab wounds. The AG thinks it’s a serial killer. She wants Starling on the case, so that no family has to suffer the way hers did when Catherine was abducted. Clarice’s reputation for hunting monsters precedes her, so Martin makes Starling a special agent of the task force. Martin warns that Paul Krendler, the head of the team, may still have a stick up his keister about Starling showing him up on the Bill case. Martin also asks Clarice to return her daughter’s calls; the damaged girl thinks Starling is the only one who can help her.

Clarice arrives on the scene, and Krendler wants nothing to do with her. He calls her Martin’s “drop of honey” for the press. He’s looking to close the case cleanly and quickly, making it clear that Clarice is expected to say and do exactly what he tells her (and confirming that he’s a male chauvinist jerkface). The bodies in question have strange bite marks that Clarice notes are shallow and spread out. “There’s no intimacy here, no frenzy,” she tells the team. She doesn’t believe the murderer is a true serial killer. “It’s too controlled, too sane.” Krendler doesn’t want to hear it. He promptly tosses her in front of the press like a lamb to slaughter, pressuring her to confirm the serial killer story.

Clarice and Agent Tomas Esquivel question one of the victim’s husbands. Angela Byrd’s distraught husband isn’t very helpful, but they do find out his older son has autism. They hunt down the other victim’s next of kin, a junkie who tells them her mom took custody of her child, who wound up in “that learning place, the place for freaky kids who have to be fed through a tube.” Turns out both victims have connections to special-needs children. When they report their findings to Krendler, he assigns Clarice to a desk.

Meanwhile, Clarice returns a message that turns out to be from Catherine. The young woman is beyond distraught, telling Clarice that she’ll never feel safe. She asks Clarice if she can sleep, “… or do moths wake you up?” Catherine wonders how Clarice can be out there in the world, to which Clarice responds that they’re different people. Catherine counters, saying they’re exactly the same, and cryptically warns her against trusting her mother Ruth. 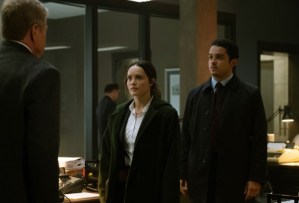 A new victim is found, and Esquivel learns the woman had a daughter with severe facial deformities. The agents then discover that Angela Boyd was in a clinical trial for migraines, and many of the participating women’s children turned out to be “messed up in different ways.” Clarice finds a stack of papers Angela hid with a number for a journalist named Rebecca who was writing a piece about the trial. Angela had been reaching out to the other women, and they were all ready to blow the whistle.

Clarice and Esquivel go to the journalist’s home and find an unmarked vehicle outside, which immediately puts them on defense. The murderer is already inside the house! Esquivel finds the journalist near death in the bathtub, her wrists slashed, but he’s immediately ambushed from behind by the killer. He tries to stab the assailant with a piece of broken mirror, but the guy takes off. Clarice follows the perp, who chokes her and tosses her on a table. A scuffle ensues, which ends with three bullets in the guy’s chest.

“You have no idea what this is,” the guy mutters, but he won’t talk until he gets a deal. As the journalist is wheeled into an ambulance, Clarice confirms that the women from the trial were all planning on talking. When Clarice tells Krendler that the killer was contracted to kill whistleblowers, he asks if she can prove it.  She can’t… yet. He wants her to tell the press that they caught the serial killer. He says they’ll investigate the conspiracy angle without her, but tells her to get out there and tell the lies he’s fed her.

Clarice then tells the press the truth: that the women died because they were trying to tell a story. “They were not random victims of a serial killer,” she confirms, and “I’ll be here until we close the book.”

What did you think of the Hannibal-free premiere of Clarice? Grade the episode below, then sound off in the Comments!