Real-world politics not thrilling enough for you? Fear not, for Tyler Perry’s The Oval has finally returned to BET with its thrilling second season. And even after having a night to sleep on it, we’re still trying to wrap our heads around what (and who?) went down in Tuesday’s bonkers premiere. 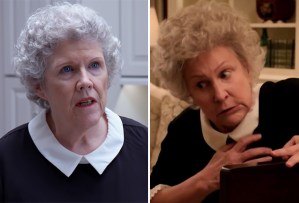 Let’s begin by addressing the elephant in the room: No, your eyes aren’t playing tricks on you. The maid who discovered Jean’s body in the finale is not the same maid we see reacting to that discovery in the premiere. According to IMDb, the role of “Housekeeper Laura” has peacefully transitioned from Theresa O’Shea (left) to Victoria Scala (right). You’re welcome.

Jason eventually emerges from the lavatory, but the murderous wanker brushes off his grandmother’s line of questioning with a simple “I’m constipated.” Nevertheless, she persists. “If I go into that bathroom and find any sign that you’ve been doing anything perverted, you’ll be in big trouble,” she says. 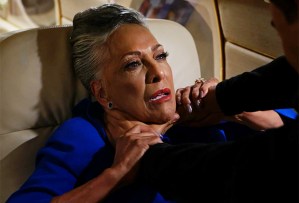 He attempts to change the subject, asking his grandmother to turn the plane around so he can clean his room (aka dispose of Jean’s body), but she isn’t having any of it. And when she asks for clarification, he jumps straight to calling her a stupid bitch and choking her out. How is his sister sleeping through all of this?!

Other developments that we simply must discuss…

* Sam returns from his meeting with the First Lady sporting what appears to be a boner, so Priscilla does what any level-headed wife would do — she demands that Sam drop trou in the middle of the White House kitchen so she can smell his genitals. “I will burn this bitch down with both of us in it,” she threatens. “You better pull those pants down!” He does his best to calm her down, but it’s too late. She has fully committed to this routine. Other greatest hits include “I will poison him and her!” and “That’s right, I just threatened POTUS and FLOTUS!”

* In other functional-relationship news, Richard is still furious with Nancy for having a secret affair baby while he was “out there fighting in the war.” (Which war, you ask? … Actually, it’s better if you don’t.) Richard is so angry, in fact, that he ravages poor Nancy’s unwashed salad — which is not a sexual metaphor — and makes her clean up the mess. Credit cards? Canceled. Bank accounts? Depleted. Lettuce? Everywhere.

* Barry lures Ruth to the police station, shouting “Lock her up!” several times in the process, but his plan hits a snag when Ruth “cleverly” flips the script on him. She tells the officer that he kidnapped her, resulting in Barry’s immediate arrest. Is that how kidnapping works? Is that how any of this works?!

* Not only has the pharmacy been restored to its original glory, but Sharon and that pharmacist whose name I can’t bother to learn are back on their BS. This time, he’s convinced that Sharon is pregnant because she’s been sitting down and peeing a lot. Pharmacists know these things. Sharon tells him that if she is carrying anyone’s baby, it has to be Barry’s, to which the pharmacist casually replies, “Sharon, if you are, it’s going to make me crazy.” Ladies and gentlemen, we call this dramatic foreshadowing. Very subtle.

* In light of the botched assassination of those two Secret Service agents, the president summons his chief of staff to discuss a few of their newest hires. The following is an actual exchange of words between these two men:

* Last but not least, Bobby whisks Lilly to a private cabin where she’ll be safe. He also apologizes for it not having air conditioning, which begs the question: When is this episode supposed to take place? Time seemed to move very slowly in Season 1, which began on Inauguration Day. So it has to be, what, March at the latest? Anyway, the situation escalates when Lilly decides to tell Bobby that she knows President Franklin killed someone. It’s important to note that she prefaced her reveal by asking “Can I trust you, Bobby?” which is a fair question to pose to a man you had sex with in an airport bathroom during a brief layover.

Which Oval premiere moments had you hitting “rewind” just to make sure you didn’t imagine it? Grade the episode below, then drop a comment with your full review.