Tuesday’s debut finds the titular character still struggling to juggle his job as an on-air host and a full house in the wake of his wife Cori’s (Niccole Thurman) death. The episode begins with the sweet image of Kenan waking up in a jumble of his kids’ limbs and rushing ever so quietly to get himself and his girls ready for the day. That means quickly showering, laying out their clothes, packing their bookbags and assembling lunch — in this case, peanut butter and jelly sandwiches — while they sleep. Unfortunately, his careful tip-toeing around the house is a vain effort.

Rick (Johnson) drops by unannounced, eliciting a high-pitched yelp from the single father and waking his super well-adjusted girls (seriously, they quote their dad’s self-help books and refer to their mom as a “deceased parental figure”). After a quick chat with Gary, who is just rolling in from a night out at the club, it’s off to work. 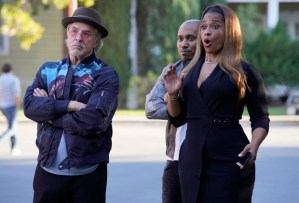 Kenan’s work crew includes a few sitcom favorites, including The Mindy Project’s Fortune Feimster as sports correspondent Pam and Single Parents alum Kimrie Lewis as Kenan’s boss Pam, along with Taylor Louderman as Tami, his vibrant co-host. Pam checks in on him after the on-air anchor again shows up late, snaps at Tami and just hasn’t been himself lately. It’s clear that his coworkers are worried that he hasn’t yet processed his grief, which is awful timing given that the show’s ratings are slipping.

Kenan insists he’s all right and has lunch with Rick and Gary, with the former affirming that Kenan is doing just fine. Meanwhile, Gary expresses his concern that Kenan hasn’t moved on, since he dedicates all his time to his kids (thank you, Gary, for introducing “trillgen” into the lexicon) and just brushed off the obvious advances from his attractive coffee vendor. Over dinner, it’s business as usual with the family until Kenan chides his daughters for wanting a phone so they can be Instagram influencers, joking about their mom coming back from the dead just to drag him to the other side with her. A regretful Kenan quickly apologizes for the comment, but the girls are just relieved to hear their dad finally talk about their mom. This prompts Kenan to tell a funny story of how they met on the set of a sitcom in which Cori played his mom, despite being only three years older, because Hollywood is sexist.

Relieved to finally be able to talk about Cori, a confident Kenan again brings her up during a TV segment the next morning. However, it ends disastrously when he gets defensive about Cori’s decision to use an epidural and accidentally insults both working and stay-at-home moms. This causes a major controversy among the show’s viewers, which Kenan plays down as a small mistake. But according to Pam, who tells him he really needs to handle his business, the network is demanding a “sorry you were offended” non-apology on the air to tide things over.

The following morning, Kenan begins his prepared statement before stopping to spill his genuine feelings. “When Cori passed, I was devastated,” he tells the stone-faced audience. “I screwed up, and I am genuinely sorry.” His heartfelt apology wins everyone over, and he’s back in the internet’s good graces.

Back at home, Kenan reveals he successfully baked a cake-pie hybrid concoction for his daughters’ bake sale. Actually, he got it from a segment of his show, but that’s not important. It’s too bad that Aubrey and Birdie weren’t able to use it for their school function, since Rick immediately digs into the baked good with a fork. The episode wraps with the family curled up on the couch watching old outtakes of Cori and Kenan and their highly inappropriate sexual tension while playing mother and son.

What did you all think of Kenan’s first episode? Grade the premiere below, and then share your thoughts in the comments!