“Scotland,” Sam Heughan intones at the start of Starz’s new travel series, Men in Kilts: A Road Trip With Sam and Graham. “It’s an ancient land with incredible history and tradition.” And a fair number of whisky distilleries… but we’re getting ahead of ourselves.

Heughan and his former Outlander co-star Graham McTavish are determined to show you their homeland’s highlights, which they visit via snug camper van in Men in Kilts. The eight-episode show started as an idea for a podcast all about Scotland; it grew into a book (Clanlands) and Men in Kilts, which finds McTavish and Heughan trying their hands at various inherently Scottish activities.

In Sunday’s premiere, we get a good look at the van — appointed with Scottish knickknacks — as Graham blesses it. “Be good to us,” Sam adds. “Because we’re going on the trip of a lifetime,” Graham finishes.

There’s a bunch of footage from Outlander‘s first two seasons — when Heughan played McTavish’s character’s nephew — and the visuals of wee baby Jamie and his wee baby bangs are adorable. “I think you and I have the same thirst for adventure as our characters,” McTavish tells his friend. But they agree that “the truth about Scotland is so much more interesting and exciting” than what’s portrayed in the show. “You guys have seen the wedding-night episode, right?” I wonder aloud. But no matter, because we’re on to a food-and-drink tour, starting in Edinburgh!

McTavish and Heughan visit The Kitchin restaurant, where every dish nearly makes them cry with its beauty. Then they pull on some cable knit sweaters and yellow overalls to board a  fishing boat in Pittenweem, one of Scotland’s active ports. They haul in a netful of prawns, then meet chef Tony Singh on shore as he cooks up some bounty from the sea. 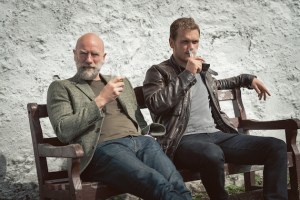 “I’m loving this. We should do a cooking program,” Heughan says after Singh hands him a mortar and pestle. “All we’ve done is cream some butter and grind some coriander. It’s not exactly Michelin-starred stuff,” McTavish grumps.

Next, they’re off to Islay, a small island off Scotland’s western coast. There’s a lot of talk about the country’s distilleries, a little peat-cutting and a quick bicycle ride before the men are frolicking in barley on a malting floor. (Think snow angels, but in the drying grain that will eventually become Scotch.)

Outside, they drink 25-year-old whisky with one of the distillery dudes, then have another wee dram back at the camper. And if that’s not a fitting way to end our first day with Dougal and Jamie, och, I dinna know what is.