When Good Trouble returns for Season 3 on Wednesday, Feb. 17 (Freeform, 10/9c), both Adams-Foster sisters will find their romantic relationships in upheaval.

For Callie, the trouble stems from her decision to use the information she’d garnered from her lawyer boyfriend Jamie to protect the class-action lawsuit tenants. “Callie’s dealing with the demise of her relationship, largely because of a moral choice she made that, definitely at least from Jamie’s point of view, felt like a personal betrayal,” executive producer Joanna Johnson previews. As a result, Callie is wondering “if this really means the end of her and Jamie,” while also “questioning herself, in essence, [about], ‘Did I do the right thing, or did I not do the right thing?’ But you can’t compromise your morals, even for someone you love.”

As for her sis Mariana, who’s long had a growing attraction to her boss Evan, she “sort of seized upon the moment of assuming that [her boyfriend] Raj had slept with Isabella to justify going to Evan and hooking up with him, which is something she’d been wanting to do in some ways,” Johnson notes. “So she really kind of took that moment as justification.” And you can definitely expect that love square to take some twists and turns in the season opener, which picks up immediately following the events of the Season 2 finale.

While romantic tribulations will be plaguing many of the residents of The Coterie, they can rest easy knowing that — for the time being, at least — they’re living in a pre-pandemic world. “The work stories and a lot of the personal stories would be impossible to tell if everybody was just isolated,” Johnson explains. “I just also think that people don’t want to turn on the TV and see everyone in masks. I feel like people want to escape a little, and I really appreciate television [shows set in] a mask-free world, where people are out. It relieves my anxiety when I see that on TV.” 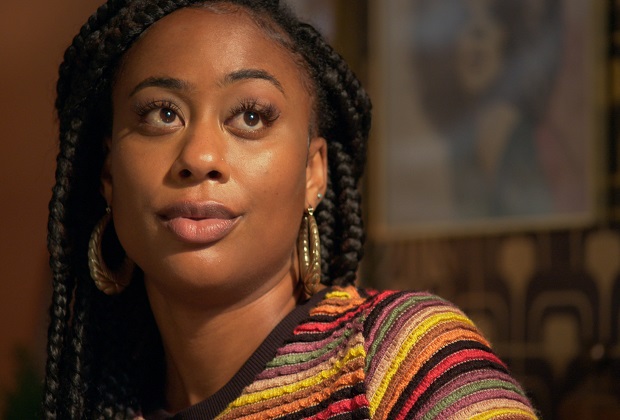 However, that doesn’t mean that the topical series won’t be taking on timely issues from the real world. With Malika’s storyline, “we’re continuing to explore the fact that our fictional local LA prosecutor is targeting activists and targeting Black Lives Matter,” Johnson shares. “That’s as topical now as it was this summer, as it will be this year. Just look at how Black activists are treated as opposed to right-wing activists, and what happened, largely, on January 6… Could you imagine if Black Lives Matter activists showed up armed, what would happen? So we’re still talking about how Black activism is seen in a criminal way, and Black protest is criminalized, as opposed to being a freedom of speech and the right to carry arms, as it is when you see people that are white activists on the right.”

Meanwhile, Mariana’s work at Speckulate leads into a story about “how a lot of these sort of right-wing activist hate groups will overtake certain apps to communicate with each other,” Johnson says, adding that the episode asks “the question of, what is freedom of speech, and what is hate speech? And should that be protected?”

Elsewhere, Callie finds herself standing up for “the mistreatment of mentally ill patients who are incarcerated, but really shouldn’t be,” Johnson previews.

Good Trouble fans, what are you looking forward to seeing in Season 3? Hit the comments to share!