Reboots and Ru-vivals may be all the rage, but they rarely match the quality of the original. Enter this week’s episode of RuPaul’s Drag Race.

Three seasons after The Bossy Rossy Show wowed audiences with its terrifying pickles and sexy drag babies, Ross Mathews’ iconique late-night talker was brought back for another round on Friday — and it was all over the place. (Sure, there were a few highlights, but it’s not a great night of performances when someone receives the highest honors for playing a mime. Even if she did emote for the gods.)

This came after a thoroughly satisfying reading mini challenge, which Gottmik won with a series of savage reads about Kandy Muse identifying with the pug community, Tina Burner having a football player’s build, and Utica Queen just being “f–ing weird.” That last one was actually a recurring read throughout the mini game; Tina straight-up asked Utica where she’s hiding the bodies of her victims. Watch the full reading challenge below:

The real gag this week turned out to be Olivia Lux, whose cover as a low-key fierce competitor has officially been blown. Tina even clocked her as a “secret diva,” and she’s not wrong. Not only was Utica furious when Olivia “stole” her part in the improv challenge, but Olivia even threw a little salt into her wound, suggesting, “I might end up in the top again.” And you know what? She did end up in the top. This marks the second maxi challenge win for Olivia, who has yet to end up anywhere close to the bottom. And the more I think about her clever take on the runway theme (pictured above), the more I appreciate her ingenuity.

With all due respect to Miss Lux, however, I think I would have declared Symone this week’s winner. Not only did she bring enough energy to keep her entire improv sketch alive, but I don’t even have words for how good her runway look was. I just sat there slack-jawed, attempting to absorb every inch of this African warrior-inspired masterpiece… 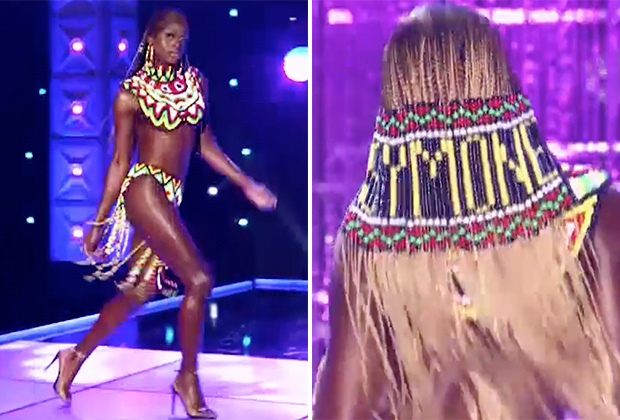 Our Queens sparkled & shined on the runway in their very best beaded lewks! Whose was your favorite of the night? #DragRace pic.twitter.com/goSxIWFHbR

On the other end of the spectrum, a combination of unimpressive improv performances and lackluster runway presentations landed LaLa Ri and Elliott With 2 Ts in the bottom two this week, with Utica narrowly avoiding having to lip sync for her life.

Despite LaLa’s track record for killing lip syncs, Elliott entered their battle with confidence. And from the moment Kelly Clarkson’s “Whole Lotta Woman” started playing, she turned it out. LaLa may have charisma, uniqueness and talent, but Elliott brought the nerve, remaining at or above LaLa’s level the entire time, throwing in the occasional split to sweeten the pot. And those synchronized body rolls! Real talk, neither of these ladies disappointed. In the end, however, the “LaLa Ri Experience” simply wasn’t enough — Ru was forced to send the queen sashaying back to Atlanta.

Do you think this was the right call? (Part of me expected a double shantay, if I’m being honest.) Vote in our poll below, then drop a comment with your thoughts on the episode.