The Tampa Bay Buccaneers’ decisive 31-9 win over the Kansas City Chiefs on Sunday night drew one of the smaller crowds in recent Super Bowl memory.

As (finally) reported by Nielsen following a most atypical delay, CBS’ multiplatform coverage of Super Bowl LV — which had the second-largest margin of victory in 18 years — amassed 96.4 million total viewers, down five percent from last year’s cume and marking the smallest audience for the Big Game since at least 2007 (when the Colts beat the Bears 29-17, on CBS).

That said, Super Bowl LV stands as the most live-streamed NFL game ever; its “average minute audience” of 5.7 million viewers was up 65 percent vs. the 2020 championship.

Last year’s Super Bowl, in which the Chiefs topped the 49ers 31-20, amassed 102 million viewers across Fox, Fox Deportes and all digital properties, with viewership on Fox alone totaling 99.9 million. CBS’ previous hosting of the Big Game in 2019 totaled 100.7 million — which at the time marked a 10-year low (and an 11-year low for its broadcast-only audience of 98.2 mil). 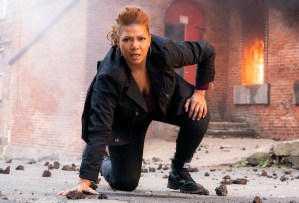 Following Super Bowl LV, the series debut of the Queen Latifah-led The Equalizer drew 20.4 million viewers — the smallest audience for a Super Bowl lead-out since Fox’s 24: Legacy in 2017 (17.6 mil), but the best numbers for any entertainment program since the February 2020 Academy Awards.

TVLine readers gave the reboot an average grade of “B+,” with more than 80 percent saying that plan to keep tuning in.

Looking at the four previous times CBS hosted the Big Game, The World’s Best (series premiere) drew 22.2 million in 2019 (and went on to last just a season); The Late Show With Stephen Colbert delivered 20.6 mil in 2016; an episode of Elementary copped 20.8 mil in 2013; and Undercover Boss‘ series launch scored a whopping 38.7 mil in 2010. The network’s most super success story, though, was when Survivor‘s Season 2/Australian Outback opener netted 45.4 million viewers back in 2001.