Every hero must have his journey full of obstacles, and in Tuesday’s This Is Us, Kevin gets his.

The hour chronicles Kevin’s attempts to rush to his expectant fiancee’s side when she goes into labor far earlier than expected. Yes, as the promos promised, there is a car wreck. No, as said promos heavily suggested, the accident is not Kevin’s, nor is he hurt.

In fact, pausing to help a fellow traveler in extreme distress is merely the device that ultimately keeps Kevin from boarding a plane and being by Madison’s side as she awaits their twins’ entrance into the world. But hey, if you’re going to be a good Samaritan, you might as well be a good Samaritan to a West Wing alum, right?

It’ll all make sense in a few minutes. Read on for a recap of “There.”

THIS ONE TIME, AT FOOTBALL CAMP | Let’s get the flashback storyline out of the way up front. Jack drives Kevin to the football camp his coach mentioned in a previous episode, and Papa Pearson couldn’t be more amped. “You do good this weekend, word is going to spread quick that you’re the next Terry Bradshaw,” he tells Kev, who looks considerably less excited about the event.

When they arrive at the hotel where they’ll stay for the weekend, Kevin’s nerves hit their zenith and he vomits from the pressure. “What if I suck tomorrow?” he finally says after Jack realizes something’s wrong. He reveals that he overheard Jack telling Rebecca that she’d made him “soft,” and he worries that he won’t have anything in his life if football is a bust. Jack tries to tell him that’s not true, but the fact that he’s been peacocking around every time Kevin gets anywhere near a gridiron makes his assertions a little less believable. “We never do anything alone together, but you took the time to bring me here, because you think football is my only shot at being special,” Kevin says, miserable, adding that his coach often calls him stupid. 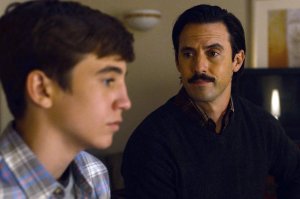 This last bit of information is news to Jack, and it seems to galvanize something in him. He abruptly announces they’re going to get dinner, so the pair wind up at a restaurant where the coach also happens to be dining. Jack tells Kevin that his own father was super into Jack being a great pitcher for his Little League team, but that he’d bring beer to every game and wind up drunk by the final inning. “I started praying before every game, because a good game meant a good car ride home,” he says; during the episode, we see snippets of one of these rides, when Jack’s dad was so intoxicated that a young Jack had to pilot the family car home.

Jack realizes that he’s about to ruin football for Kevin the way his father ruined baseball for him. “I ended up just like him,” he says. “No Dad, you’re way better than him,” Kevin reassures him, and it’s sweet. “Thank you, my son. You’re going to be way better than me,” he responds. Then, seeing that Coach is heading to the men’s room, Jack follows him and quietly commands that he never call Kevin stupid again. “Tell me you understand,” Jack says, more menacing than maybe we’ve ever seen him? Coach is scared; he agrees, then hightails it outta there. Kevin sees his coach leave quickly and wonders if Jack said anything to him in the bathroom. “Nope,” Jack says. Kevin’s pleased expression seems to indicate that he knows his dad isn’t telling the truth, but he doesn’t mind. 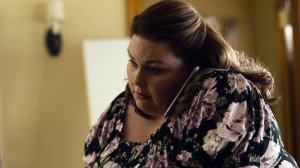 DENIRO IS WAITING | In his trailer on the Vancouver set of The Glass Eye, Kevin practices his lines — using the color-coded-card trick Randall taught him, aww — and answers a phone call from his sister. We learn that Ellie, Kate and Toby’s surrogate, is getting induced that day, and that Kevin is nervous about the courtroom scene he’s shooting that day. “It’s my big ‘Did you order the Code Red?‘ moment. Every time I think about it, I pee a little,” he overshares.

A while later, he’s on his way to set to act opposite (I assume Robert?) DeNiro when Madison calls: She’s having contractions six weeks earlier than planned, and she’s heading to the hospital. Kevin hangs up and tells Foster, the director, who says they can probably speed things up a little and get him on a plane the next day. “I don’t think that’s going to work,” Kevin says, apologizing as he walks out.

“Hang in there,” Kevin tells Madison when he calls her back from the car. “I promise, I will get to you.” But there are no flights from Vancouver to Los Angeles until morning. Rebecca and Miguel — who are serving as his makeshift travel concierges — book him a flight out of Seattle, which he’ll make if he keeps driving at his current pace. (Side note: The sheer amount of distracted driving Kevin does in this episode makes me nervous, as it is designed to. Keep your eyes on the road, man!)

Kevin’s agent calls. Randall calls (which we saw in the previous episode). Then Foster calls. And Kevin is so worried/frustrated/upset by that point, he flips out on the director when he tells him to turn around and come back to the set. “Shut up!” Kevin yells. “No one cares about your stupid movie! I quit!” I would be more worried about this outburst if Kevin weren’t a handsome white man in Hollywood — tempers and outbursts have to be a lot worse than that before they have consequences there.

PIT STOP | Kevin is in the middle of a pep talk from his mom when the call breaks off: He’s in an area where there’s no service. And of course that’s when he comes across a car that’s run off the road and is on fire on the embankment. Kev tries to call 911, that call dies, too. So he hops over the broken guardrail to see if he can help. 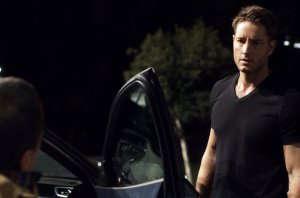 There’s a man in the car (played by The West Wing/Scandal vet Joshua Malina), and he’s in bad shape. Kevin gets him out of the car, ties off his badly bleeding leg with his jacket and doesn’t realize that his wallet — with his driver’s license in it — goes flying in the process. Kev is able to get the man to his car, and as they talk, the guy realizes who Kevin is. “Life is so weird,” he muses, then starts to lose consciousness. To keep him talking, Kevin tells the dude the story of what’s going on with him at the moment, complaining that he’s about to miss the most important day of his children’s lives. The guy says he has three teenagers and that the day a kid is born is hardly the most important in its life, but Kevin doesn’t seem comforted by that fact. He drops the man at the closest emergency room, then hops back in the care and speeds off.

After all that, Kevin does make it to the Seattle airport in time for his flight. But at the TSA Pre-Check line, he realizes that he doesn’t have his ID on him, meaning he can’t get anywhere near the plane. Kev tries to play the “Do you know who I am?” card (“You can look me up online. My whole damn life is online”), but the patient TSA worker merely tells him that’s now how it works. He argues that he can’t start his children’s life “by not being there for them. I don’t know how else to explain it. It will break me.” But she’s unmoved, and it looks like he’s stuck in the Pacific Northwest for the night.

NOW, WE WAIT |Back in the hospital in Los Angeles, Madison is 3 cm dilated and sad that the only two people she’s close with — Kevin and Kate — are otherwise occupied during her hour of need. As the reality of going through labor by herself sets in, she gets very sad. That’s when Randall and Beth, still on the drive back from New Orleans, call to see if they can help in any way. She sniffles through a polite decline, but when Randall reiterates that they can just stay on the phone with her for a while to keep her company, it breaks her. She sobs and agrees. “You’re family,” he tells her, which makes her cry even harder.

Now it’s your turn. What did you think about the episode? Sound off in the comments!