If Big Sky‘s Rick Legarski is faking it, he’s doing a heck of a job.

Look, I don’t like to entertain the possibility that the Montana State Trooper actually can’t remember anything about his involvement in a sex-trafficking ring and a series of related murders, either. But Tuesday’s episode really makes it seem like that’s the case. Chalk it up to John Carroll Lynch’s acting skills: The Legarski who’s lying in that hospital bed seems like the exact opposite type of person who could so easily pull off those nefarious acts.

And while discussion of Rick’s veracity dominates the top of the episode, it soon gives way to get another panic: A boy goes missing soon after he tells his mother he might be able to identify the man the police think is Legarski’s accomplice. On a related note: The stuff happening in Ronald’s basement is probably going to scar that boy for life.

Let’s hit the highlights of “The End Is Near.”

THE REAL DEAL? | The episode picks up exactly where the last one left off: with Merrilee pointing Jenny and Cassie toward her home’s second floor, where Ronald is desperately trying to get into Rick’s hidden room. The private detectives go upstairs, guns drawn, only to find that Ronald escaped out a window. As Ronald drives away, Merillee calls, and he flings his phone out the window. Yep, he’s freaking. 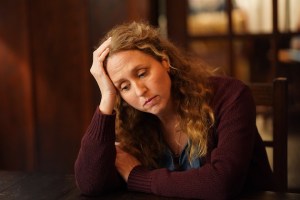 Ladies and gentlemen, the manhunt is on! As Sheriff Tubb’s officers search the Legarski house, Merilee repeatedly says she had no more clue that “Mitchell” was Rick’s partner in crime than she did that her husband was a criminal, himself. “Obviously, I don’t know anything, except that I’m the world’s biggest dope,” she says miserably.

Over at the hospital, an MRI determines that there’s no signs of bleeding in Rick’s brain, and he seems to be getting better. His lawyer, Penelope, informs him that Ronald was in his house. But a blank Rick claims not to know who Ronald is at all. Later, the results of a private polygraph test — ordered by Penelope — are so promising that the lawyer requests an official one: She’s rather sure that Rick is telling the truth about his amnesia. 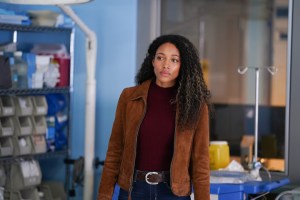 Know who else is? Cassie. After posing as hospital staff to sneak into his hospital room, she takes off her mask and hair covering and puts herself in his face, figuring the visit will spur some spark of recognition in the cop. Instead, he nearly starts crying. “Did I shoot you with an arrow?” he asks, sounding shaken by the line of questioning in the lie-detector interview. Outside after, Cassie is convinced that the Legarski they pursued “wasn’t there,” she tells Jenny. “I think Rick Legarski as we knew him was gone.”

Later, Jenny blazes into Legarski’s room demanding that he confess, but she’s no more successful than Cassie was. “If I did what you say I did, what others are telling me I did, then I most surely hope to die, as well,” he replies, tearful again, when she tells him about Cody. “Maybe I already have.” 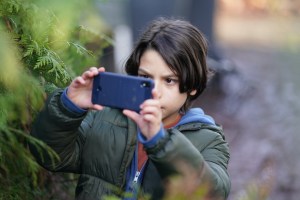 RUN, KID! | Meanwhile, the man in question returns home, where Helen’s corpse is watching Gentlemen Prefer Blondes on the living room TV. He straps her chair to a handtruck and bounces it down the basement steps; after her body is stashed away, he cleans the kitchen and starts parroting Helen’s criticisms of him aloud. He’s so upset and he’s starting to sound like her: Dare I hope he goes full Psycho and starts wearing her clothes? (I suppose he’s got more pressing matters on his mind, given how the rest of the episode goes.)

Meanwhile, a little boy named Erik is delivering copies of the Helena Herald along his route when he takes a good look at the police sketch on the front page and realizes it’s a picture of Ronald — one of his customers. So he delivers that day’s paper to the Pergman home and then hides in the bushes to take photos of Ronald. He gets them… then gets grabbed by the truck driver.

The (slightly) good news: Erik had called his mom before heading to the Pergman home, saying that he recognized someone in the paper and “he thinks he knows where he lives,” she tells Denise at the detective agency. The now-distraught mom had been too distracted with work at the time to fully process what Erik had said; now, though, her report helps law enforcement focus on the boy’s paper route. 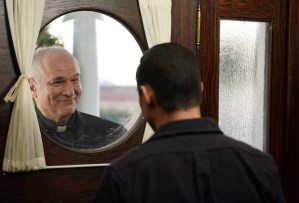 RONALD, UNRAVELING | I’ll give this to Erik: He’s spunky. Even though Ronald puts him in a cage in the basement and says some very scary things, the kid has the wherewithal to get his hands on a staple gun and taser, which he uses liberally on his captor. Still, all the attack does is anger Ronald, who is extra on edge when his mother’s priest shows up and wants to chat. He’s looking for Helen — they had a meeting on the books, and it’s not like her to ghost — but he also wants to talk to Ronald about his “prurient interests” and Helen’s fear that he’s become part of something that is about to consume him.

When Erik makes enough noise in the basement to draw both men’s attention, Ronald lies about having a dog down there and excuses himself to deal with the situation. The priest quietly follows, and when he sees what’s going on, he runs. Ronald catches up to him in the kitchen and tases him, but the man of the cloth is also apparently a man who’s not going down without a fight: He’s got some skills. The men throw punches and toss each other all over the kitchen, but ultimately Ronald is able to get the Father’s head submerged in the sink full of dishwater. He drowns him, then tosses him down the basement stairs like a heap of dirty laundry.

By this point, Ronald’s just about reached his limit. The last we see of him in the episode, he’s dousing the basement in gasoline, singing “If You’re Happy and You Know It” in unhinged fashion and asking a terrified Erik, “Do you have a match?”

‘BIG RICK NEEDS TO REMEMBER’ | Back at the hospital, Merilee brings Rick a photo of Erik and urges him to be the utterly humane “Big Rick” that he prided himself on being earlier in his life. “Your humanity needs to rise up now, Rick,” she begs. “You’re the only one who can save this boy. Big Rick needs to remember.”

He says he can’t, and he looks sad about it. But he’s also drumming the three fingers of his right hand against the bed. And when Merilee notices this, she looks shocked. Could this be a tell that Rick’s been playacting all along?