WandaVision‘s most recent outing at last answered some of our burning questions… then swiftly introduced another major one.

In Episode 4, which revealed how S.W.O.R.D. and other agencies on the outside are handling what’s happening in Westview, Darcy Lewis and Jimmy Woo noticed an odd censorship of Wanda and Vision’s sitcom: For example, when Jimmy tried to contact Wanda via a swim club radio in the Bewitched-esque installment — which we know resulted in Dottie cutting her hand on shattered glass — the episode that Darcy was watching jumped ahead by a few seconds, completely skipping over the radio incident.

In discussing that curious twist with TVLine, showrunner Jac Schaeffer concedes “there’s so much that we don’t understand about what’s going on” inside the Westview bubble. But even though Schaeffer can’t specify what, or who, is behind the sitcom’s censored moments, she confirms we’ll get more answers as the season continues.

“The next few episodes will absolutely clarify a little bit more about this situation as we move forward,” she hints.

Among Schaeffer’s other teasers…

* Though Episode 4 almost entirely sidelined Wanda and Vision’s sitcom existence, Schaeffer says the series “will absolutely return” to the Westview we’ve been watching and piece together “what [Wanda and Vision’s] journey is for the rest of the show.” 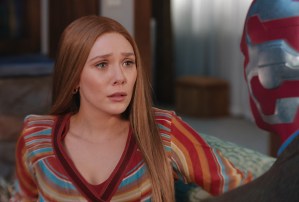 * Echoing an ominous teaser from star Paul Bettany, who hinted to TVLine that “couples aren’t necessarily that fond of each other” in more modern sitcoms, Schaeffer similarly warns of “complicated times” ahead for the titular couple. “[Viewers have] invested so much in Wanda and Vision, and in their love story and their marriage in this town,” she elaborates. “And like all marriages… there are differences of opinion, and that was always something I was really interested in about this show — the domestic picture of the two of them and getting more authentic in that space.”

* After seeing an overwhelmingly positive response to Darcy and Jimmy’s rapport, Schaeffer points to an “organic” development of their working relationship as the show progresses. “[In the script] we don’t really underline the fact that they sort of click and buddy up right away… but people really seem to be jumping all over that, and I love them together,” she says.

Though Schaeffer admits the astrophysicist and FBI agent are “consistently underestimated” in the workplace, “they see each other as being good at their jobs, and being professional and talented and good people, above all else. It was always our hope that they would align very quickly.” (With reporting by Keisha Hatchett)