From Nimue’s arrival to Rafael’s departure, the third season of Legacies has been full of surprises, though none have been quite as lyrical as the jaw-droppers thrown at us in Thursday’s episode, which featured the long-awaited debut performance of Salvatore: The Musical.

Under the bright lights of the Salvatore School auditorium, Josie, Kaleb, Jed and Lizzie — as Elena, Damon, Stefan and Caroline, respectively — retold the story of the institution’s founding, hitting several iconic beats from The Vampire Diaries in the process: Stefan and Elena’s first meeting, Stefan and Damon’s dramatic reunion, Elena’s eternal back-and-forth between the brothers, the seemingly endless parade of doppelgangers, and Klaus’ (played by this week’s interloping monster!) multi-figure donation to the school.

Speaking of Klaus, we even got a surprise performance of “Always and Forever” from Hope, who spent most of the episode rallying against the musical’s depiction of her family. (But more on that later.)

Of course, no surprise was more, well, surprising than the letter Lizzie received from Caroline, particularly because it was read in a voiceover by none other than Candice King (aka Caroline Forbes), marking her first official “appearance” on Legacies. (Click here for our gallery of every crossover in the Vampire Diaries universe, which has now been updated to include this episode.)

And in case you missed any of the letter, here are Caroline’s words in full: “Dear Lizzie, hopefully this can give you some perspective on who I used to be. When I was your age, I remember feeling like I was a total mess, like I was waiting to become a better version of me so my real life could start. But it wasn’t becoming a vampire that changed everything. Change is a series of small moments that build on each other, like steps up the side of a mountain. Your life isn’t on hold until you figure everything out. It’s already happening. You’re already changing, moment by moment. And Elizabeth, there is nothing wrong with you. Your brain chemistry creates unique challenges for you, but you are not broken. You are growing and changing everyday, and it’s beautiful to watch.”

Below, executive producer Julie Plec fields a few of TVLine’s burning questions from the episode: 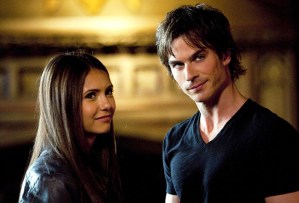 TVLINE | If there was a musical about my life, and I was still living in town, I’d want to be there. Should we imagine that Damon and Elena politely declined their invitation?
[Laughs] Let’s imagine that they couldn’t find a babysitter.

TVLINE | We did finally get Caroline to show up, even if it was just a vocal cameo. What was the ask there?
As you know, Candice is a good friend of mine and Brett’s, and there’s a soft spot in her heart for this show. She has said over the years that, she will show up one day, but she wanted a break after The Vampire Diaries and The Originals. She wanted to go out and live a non-Caroline Forbes life for a while. But she has always said, “If you never need something small or simple, just let me know.” So I just sent a text and she said, “Absolutely.” And then nine months went by before we actually needed her to do it because of the COVID shutdown.

TVLINE | Hope singing at the end was a nice surprise. How did I not know she could sing?
There are some actors who are very gifted at singing, who may even have a theater background, but just don’t like to sing anymore. They just don’t enjoy it, or they don’t want to combine [singing and acting]. When we did the talent show, Danielle [Rose Russell] was like, “No. Hope has no talent that she’s interested in sharing with anyone.” But when we were coming up with this episode, she was like, “So, Brett, you know that I sing…” And he was like, “Oh, really?” It was written so that it was coming from a place of her character working through a moment that she was having, and it just happened to be in song. That’s what worked for me. And I cry every time.

TVLINE | While we’re talking about the music, who do we give proper credit to?
This was a collaboration between Thomas Brandon, the episode’s writer, who also wrote Josie and Landon’s songs from the talent show. He’s our little secret weapon for musical stuff. But because we were doing a lot more songs than we did in the talent show, I asked him if he wanted to find a partner to take some of the heavy lifting. I reached out to my friend Michael Gracey, who directed The Greatest Showman and spent years developing those songs with [Benj] Pasek and [Justin] Paul. Anytime he came into town and dropped by my house, I’d hear different demo versions for years. So I knew he had a knack for that. I was like, “Do you happen to know anyone who’s not yet as famous as Pasek and Paul?” He said, “As a matter of fact, I just did a project with this guy Chris Read in London, and I think he’s the next Pasek and Paul.” So I said, “Send him my way,” and he did, and it turned into a really terrific partnership. … I also need to give a shout-out to our incredible choreographer Rhonda Kohl. She came up with the idea for that tango. 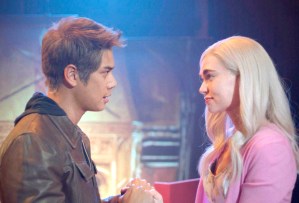 TVLINE | How familiar was Chris with this universe? The songs all felt very true to that spirit.
Chris had never seen it, so he had to do quick binge. But because he did that, it was very fresh in his head and hit all the right notes.

TVLINE | This whole experience, revisiting where it all began 11 years ago, must have been cathartic.
I think so. You’ve got a whole range of people working on this crew, some who have been with us since The Vampire Diaries and The Originals. So there was a lot of fun nostalgia for them. And you also have people who are new, who were maybe fans and viewers of the show in the past, so they got to bring their own perspective to it. One of the reasons it works so well is because Thomas wrote from the perspective of a fan, having not written on [the original show]. He could be the social media fan, poking fun at us in a way that we might not have been able to poke fun at ourselves.

TVLINE | Lastly, about that final twist: What’s next after Alyssa’s apparent betrayal of MG?
Nothing good is next. Next week’s episode was written to be the finale of Season 2, so all of the little character things that were illuminated in the musical episode are teeing up the finale. There are betrayals, tragedies, epiphanies. Next week is actually a pretty big episode for all of the characters, and then we essentially launch a new chapter.

BONUS SCOOP | We also chatted with Kaylee Bryant about Josie’s kiss with Jade. Here’s what she says about that relationship: “Josie is not exactly the quickest with things. She needs to learn a lesson before she takes a big leap, and Jade was a huge lesson to her. She openly said, ‘This place isn’t right for me.’ Josie’s been feeling that way for a while now. She gave up her magic after really struggling with an addiction to it. And now she’s living in a place surrounded by magic. It’s all she’s ever known, so hearing someone say that they’re removing themselves from an unhealthy environment is something that Josie definitely needs to hear. This is what really kicks her into gear in taking the steps necessary to take care of herself.

What did you think of Salvatore: The Musical? Any favorite throwback references? And how about that Caroline “cameo”? Grade the episode below, then drop a comment with your full review.