It has been a week for American Gods‘ beleaguered Bilquis.

After men broke into her home and kidnapped her, she was taken to a server farm and tossed in a cell. Then she was tortured by Mr. World and his associates. Her crime? Endangering Mr. World’s “close, strategic partnership” with Levittech, the company owned by the man Bilquis sex-absorbed a few episode back.

But one thing they forgot? (The goddess of) Love always wins in the end.

When Bilquis was reduced to sobs by her harassers, a tear hit the ground and seemed to create a protective cocoon of silence around the Old God. Then Oshun, one of the Orishas we’ve seen appear to Shadow in previous Season 3 episodes, showed up to provide BIlquis with a little divine pep talk. 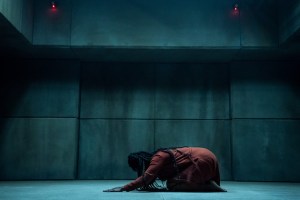 “You are not who they say you are,” Oshun told her. “You are whoever you want to be.” The visit certainly bucked up Bilquis, who began moving her body in a joyful celebration of her identity. “I am she who has always been,” she declared, dancing and parrying with Oshun. (Meanwhile, the guards watching Bilquis saw her shimmying to music only she could hear and assumed they’d broken her.)

In an interview with TVLine, Yetide Badaki says her Old God character “is rediscovering the Orishas” — after all, when you’ve been around since the dawn of man, you’re bound to forget a face or two.

“I like to point to the fact that the ancestors are literally in our DNA,” Badaki says. “That’s not hyperbole. I am my mother. I am my grandmother. I am all the women within me. I am the current manifestation of them, and I stand on the shoulders of giants that have been sent by many before me.”

In the torture scene, therefore, what we’re witnessing is Bilquis going on an internal search. “She journeys into her DNA, she get to literally dance with the ancestors,” she continues.

More food for celestial thought: “If you’ve lived for eons, are there moments you forget of your existence? Are there parts of you that start to become dormant if you don’t pay attention to them?” Badaki wonders. “I think these are all very important questions, and to be able to see her rediscover these parts of herself, and know that she’s not just the one thing that many have wanted to use her for, That many have wanted to take on for themselves, or twist. That is a part of her. But there is so much more.”

* Shadow and Technical Boy teamed up, albeit unenthusiastically, to figure out Bilquis’ whereabouts. Hilarity ensued.

* A man named Gilbert was tasked with removing Mad Sweeney’s body from the crypt where it was found. He inadvertently stepped on the vial of elixir that Laura placed near the body. And when it mixed with her ashes, she was yanked from purgatory and brought back to life. She quickly ascertained that the leprechaun is really dead, and it was her fault. She eventually took Mad’s ashes and hitched a ride to Cairo, Ill.

* Mr. Wednesday met with the Viking death metal singer Johan to remind him that they need all the disciples his music can pull in, and to suggest that Johan form a new band. Not long after, the bar that they’re meeting in blew up. Wednesday staggered out of the wreckage, ripped off his clothes and then ran around in just his overcoat. When a worried Cordelia called Shadow to tell him that she’s checking his father into a psychiatric facility, Shadow laughed. “About f–king time, right?” he said. Cordelia didn’t think it was funny and asked him to come as soon as possible.