THE PERFORMANCE | We’ve been fans of Schafer’s since the series’ start, so we were psyched to see that the second pre-Season 2 special would be a Jules-centric showcase. And the actress did not disappoint.

The hour took place in Jules’ first session with a new therapist, and it served as a counterpoint to the Rue-focused episode that aired in December. Schafer nailed Jules’ desire of wanting to be understood, which warred with her despair that no one could possibly know what it was like to be her. On the therapist’s couch, Schafer had Jules nervously pluck at the cuffs of her sleeves. Her voice trembled. Every movement communicated how uncomfortable the girl was, yet how deeply she felt the need for someone to bear witness to everything going on in her life. To wit: Schafer’s reading of the line “Without getting melodramatic, I’ve had a really hard six months” was so subtle yet filled with so much hurt (and so much whopping understatement), it nearly knocked us sideways.

We also want to single out the moment in Jules’ nightmare when she realized that Rue likely had overdosed on the other side of a locked bathroom door. Schafer pounded on the door, screaming Rue’s name, and conveyed Jules’ mix of mounting terror with little more than her balled fists and the rising pitch of her voice. Schafer was magnificent.

It’s easy to forget that Euphoria is Schafer’s first acting gig, given how natural she is in the role of the transgender teen. We’re very much looking forward to what Season 2 might bring for this singular talent. 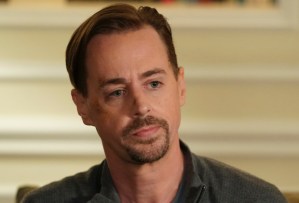 HONORABLE MENTION | After watching the season-opening tease in which Gibbs shot McGee, many an NCIS viewer surely assumed that some sort of ruse was at play and everything would be hunky dory moments later. That was not quite the case — Gibbs came within a millimeter of ending his agent’s life while trying to save it — and Sean Murray week made clear the weight of that reality. Holed up while recuperating, Tim clearly had things to say when Gibbs came by with a dolly full of computer equipment. But it was not until at episode’s end, when Gibbs stopped by for a superfluous debrief, that the men exchanged hard words. “One millimeter,” Tim nodded, Murray’s expression conveying their shared acknowledgment of the gravity of that fact. Hell, even Gibbs was choked up. Then as McGee related and embraced Torres’ “close calls make you live harder” mantra, a warmth in Murray’s eyes let us know all would be fine between McGee and Boss. 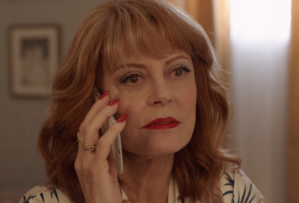 HONORABLE MENTION | From the very beginning of Search Party‘s seventh episode, Susan Sarandon‘s sultriness took center stage, foreshadowing her bombshell performance to come. The actress perfectly entrenched herself into the show’s egomaniacal world through her performance as Aunt Lylah, the owner of the mansion (and stylish wigs!) that Chip usurped as his own. Despite her fun and sassy quips, Lylah was just as nefarious as her stalker nephew, completely unbothered by the dead body and room full of chains lurking in her basement. Yet, Sarandon carried Lylah’s entitled snobbery with a tantalizing air, strutting across each frame coiffed with lush furs and designer handbags. We were sold on Sarandon well before Lylah dropped the episode’s ultimate gross-out: “I’m your aunty and your mummy,” she slipped to Chip, confirming our suspicions of the man-child’s icky family history. Leave it to Search Party to turn incest into comedy; leave it to Sarandon to become an absolute scene stealer. 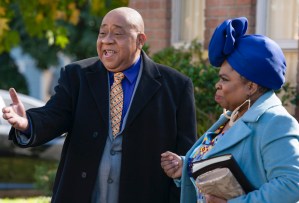 HONORABLE MENTION | For a sitcom, Bob Hearts Abishola drummed up good drama with the return of the latter’s estranged husband Tayo. The soapy arc really got us rooting for the title characters to turn their recent engagement into an actual wedding! So when Auntie Olu and Uncle Tunde went all in on Team Bob this week, Shola Adewusi and Barry Shabaka Henley stole scene after scene, whether gossiping about horrible church chin chin or shedding a tear while watching Abishola and Bob share a sweet, private dance. But when Olu and Tunde formed a formidably united front against Tayo, veritably packing his bags with their pointed taunts? That is when Adewusi and Henley made clear what a dynamic comedy duo they can be.