Trevor Tordjman has a warm smile and self-effacing demeanor that draws people in — which is to say, he’s nothing like the Bucky character he’s played in Disney Channel’s Zombies movies.

Unfortunately, some fans of the undead franchise aren’t always able to separate the Canadian actor from the snarky Seabrook High School cheerleader role he’s portrayed since 2018 alongside Milo Manheim and Meg Donnelly.

With any luck, those same Zombies fans will tune in tonight (7:30/6:30c) when Tordjman makes his debut on the Season 5 installment of Bunk’d titled, “R.V. Having Fun Yet?” As TVLine first reported, Tordjman is playing Parker Preston, a rich kid from a family of R.V. titans. Parker strolls into Camp Kikiwaka with a deed he’s inherited that gives him minority ownership and hijinks ensue. Lou (Miranda May), the head counselor and majority Camp Kikiwaka owner, is immediately skeptical, but the kids love Parker, his shiny shoes and smooth dance moves.

“I’m happy to finally be playing someone nice,” Tordjman says. “A bit nice, at least.”

TVLINE | When you heard about this role, how did it come to be? Were you a fan of Bunk’d?
I’d definitely heard of Bunk’d. I knew it was a spinoff of Jessie. But I had never watched it and when I heard of the role, I hopped on over to Disney+ right away, gave it a watch and was laughing almost immediately. I’m a huge fan of comedy and I was like, “This is funny. Like, whoever’s writing this and the actors? So good.” So, I’ve been super excited ever since that moment.

TVLINE | Were you watching it and trying to figure out where you would fit in?
Right after I watched an episode of it I was like, “Okay, what is comedy? What’s my character again?” He is entitled, but make it funny. So, yeah, definitely had those thoughts, 100 percent. 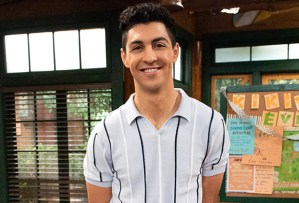 TVLINE | Did the writers, therefore, write it around you? Because we noticed Parker, like Bucky, has moves.
I was so grateful to see, you know, they threw in the dance there for me, and they threw in the whole Canadian storyline. Now, I don’t gotta worry about the accent. I can just focus on trying to be funny. I think they did definitely throw in some things for me — an abundant amount of energy. All of those things helped me a lot. So, I think that they did and, yeah, it’s been a lot of fun.

TVLINE | Did you create “The Parker” dance or was that choreographed for you?
I did create the Parker. I workshopped a few moves and some of them stuck, some of them didn’t. What you see in the third episode, the one that Parker comes in on, is what we landed with. The cast was so welcoming we had a little virtual hangout and they’re all just such cool people. Miranda reached out and welcomed me, which was just so nice of her. In regards to the moves, they were like, “Let’s see what you got.” And I gave it some thought I was going, “Okay maybe this. Maybe I’ll wiggle a bit and shake my hips. No, that’s too much hips. Let me tone down the hips. Like, I’m gonna go in with an open mind and just like throw in some stuff, and see what makes them laugh.” And that’s what I did and I just kind of went with what stuck, and we quickly workshopped it together. And then the flips, they weren’t ready for it. They were like, “Whoa, you’re flipping for real?” And I was like, “Let’s do it.” That’s me. That’s me. I try to flip everywhere I can.

TVLINE | Who are some of your comedy influences? Because this is a way funnier role for you, did you watch The Three Stooges?
I have comedy influences for days. You know, I’m a huge fan of Friends. I know that’s cliche, but like they’re just, in terms of character, like they’re all so good at what they do. They all have their quirks and together, they’re so great. So Friends was a huge one, especially coming into, you know, a multi-cam and like that type of energy. Friends is always a huge comedic influence. Other than that, I’m a huge fan of standup like Jerry Seinfeld is huge and Kevin Hart for his physicality. That speaks to me. It speaks volumes to me and, and I’m so grateful to be on a show like this. It’s as funny as it is because of the writing and I get to experiment. And I’m learning about what works for me comedically.

TVLINE | As a more physical person, who has been dancing since the age of 4, are you trying to figure out pratfalls and how many times you can fall in an episode?
Yeah. It was like, “Should I flip here?” And the producers are like, “We’ve seen the flips.” [Laughs] And I’m like, “Alright, cool, cool.” Yeah, the physicality is great you know like I’ve been experimenting and there’s been times where they’re like, “Hey, physicalize that.” And you’re like, “Yes I should be, you know?” I have the room to physicalize everything. Coming off of Zombies and just movies in general are a bit different than that. It’s not quite as big. I know Bucky absolutely is big. But most of the time, films aren’t quite as big, so it’s been a lot of fun playing around in that area where I get to just be big and physicalized. It’s fun.

TVLINE | Is it strange shooting all of this during a pandemic?
I’m super grateful to be able to still be doing this throughout a pandemic. There’s been tons of challenges, you know? And I think the rest of the cast and the crew is super grateful too because everyone is following the rules at the absolute best they can, because we all just want to be doing what we love. One of the biggest challenges, I would say, is just wearing all the PPE and the masks, especially when you’re acting. It’s like I’m trying to make people laugh with my eyebrows. Like that’s a challenge in rehearsals. We only take off the masks when we’re rolling, which you know we’re all for all of that. But when you’re acting, especially in comedy, you use your face. That’s a huge part of how you connect so now, it’s all in the eyes. Table reads, we do virtually, so we get to do those without the masks. So, I get to use my face but in rehearsal, when we’re wearing the masks, it’s all brows. I think I’ve shot five or six total now. We’re doing 21. 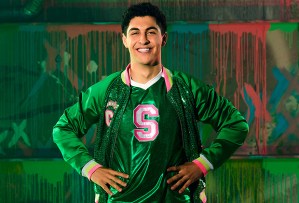 TVLINE | Time for the hot seat. We know you probably can’t talk about this, but have to ask anyway. So, after watching Zombies 2, there seemed like there was going to be a Zombies 3. Have you heard anything? Can you talk about that or not really?
Look, if I’d heard anything I’d be the first to be like, “Yeah, this is happening.” But like the energy with the cast, we gotta make it happen. We look at each other like we need to do what we need to do to make it happen. Because Zombies is such a cool, fun story. And we’re all so tight now. Like, that’s my family right there. We’re all super pumped, I can say that. So, Disney Channel, if you’re listening, “We’re ready.”

TVLINE | As a person who has been a part of Zombies since the first one, why do you think it resonates so much with fans?
I mean, first off, coming from someone who loves musicals, the song and dance of it all  is always so great. The choreography and seeing the big numbers, I love that so much. I’ve always been a fan of that. Also, the storyline is so relevant. You know acceptance and intolerance and coming together to overcome that is so big and super relevant. So, I think that really resonates with audiences, as well.