Ask Chicago Med star Nick Gehlfuss to describe in one sentence what’s on tap for his character Will’s love life during Season 6 of the NBC medical drama, and you’ll get this perfectly cheeky answer: “Someone new — but maybe someone old.”

Following his broken engagement to Natalie and then the end of his tumultuous relationship with Hannah, the ED doc is taking some time to himself — and in the process, potentially finding a new romance. “Will is really introspective, currently, professionally and personally,” Gehlfuss tells TVLine. In the days since Hannah left the Windy City to start over in Los Angeles, Will has been focused on his work and, in particular, a new clinical trial run by Dr. Sabeena Virani. So could sparks fly between the two colleagues? “He’s getting to know her through [the trial], and through the success of it, they’re growing together, naturally,” Gehlfuss shares. 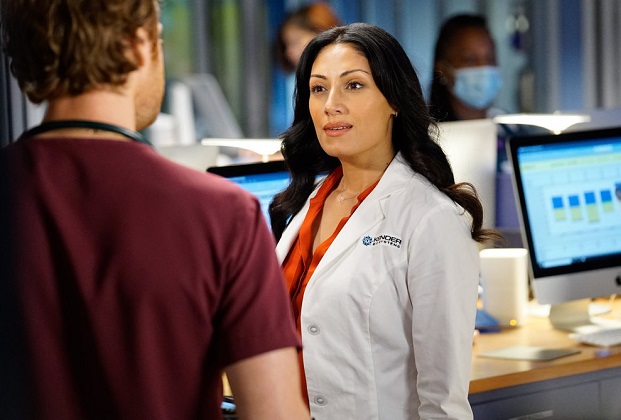 Adds executive producer Diane Frolov: “He is definitely attracted to her. [But] he’s trying to remain very professional.”

At the same time, Will’s rocky relationship history is never truly in the past, since he still works alongside one of his exes. When Natalie’s mom lands in the hospital, “there is a moment where Will and Natalie are brought back together over [her] case, and they go down memory lane,” Gehlfuss previews. “It’s this beautifully human moment that’s really well justified. I don’t want to give too much away, but the writers just do a great job of motivating certain things.”

“So as he gets closer to someone else, is he going to be reminded of his past? Which direction will he go?” Gehlfuss ponders.

On top of that uncertainty, there’s also “tension” with Will and Crockett, who’s been slowly growing closer to Natalie, as well as between Will and Ethan “over some love life stuff.”

“It may not seem as what it is, though,” Gehlfuss is quick to add. “What the writers do a good job of, as well, is where someone perceives something to be a certain way, and then, in all reality, it may not be.”

Chicago Med returns with a new episode this Wednesday at 8/7c on NBC. (With reporting by Keisha Hatchett)