Any updates on The Resident? –Marylouise
Yes, but be warned — it’s pretty dire stuff. I am hearing that although Nic and Conrad are currently in parents-to-be bliss (and soon will reveal the news to colleagues in a fun way), the shiny-happy times won’t last long. Rather, both Nic’s life and the baby’s will be put into danger due to a random, violent incident. And the fallout from this event will bring back to Chastain one of Nic’s best friends, Billie Sutton (played by Jessica Lucas).

Will we see any police officer-related storylines for Carlos this season on 9-1-1: Lone Star? –Sarah
The week after we (and T.K.) meet Carlos’ parents in the Feb. 8 episode, Carlos will “work” with 9-1-1 dispatcher Grace Ryder, when a woman calls to report she is trapped, literally, in a domestic abuse situation

Did Kevin Feige give any hints about whether Kathryn Hahn’s WandaVision character is really [SPECULATION/POSSIBLE SPOILER REDACTED]? –Blaise
The Marvel Studios boss didn’t go near that topic, but we did ask Kathryn Hahn about the little “performance” that Agnes put on for Vision at the end of Episode 3, after keeping neighbor Herb from spilling too much. “You’re going to have to keep watching,” she teased. “There’s a lot of acting going on for everybody, and a lot of layers… and questions that even the characters have, for sure.”

Can you tell us if there are going to be any major deaths on The Blacklist for the rest of this season? –Sara
Now that it’s renewed for Season 9, they do have to keep some people alive! But it is worth noting that this Friday’s episode marks a landmark for the series, as it addresses the No. 1 name on the titular list. 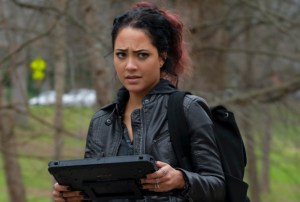 Do you have any spoilers about Riley that do not involve her relationship with MacGyver? Will we see her hacker persona this season? –Candice
And how! I am hearing that later this season, Riley will explore an opportunity to groom young female hackers in similar situations to how we found her in the pilot.

Is Justice League Dark still happening on HBO Max? Because if Swamp Thing is not happening on The CW, that show might have the character. –Allison
Yes, I am assured that JLD is still in development at the streamer.

Is ABC ever going to air more of the Whoopi Goldberg true crime doc The Con? They ran promos for an episode about a royal con that was supposed to air Nov. 4, but it never did because of election updates. And the show was removed from the lineup after that. — Maddy
Indeed, I am assured that there are at least a few episodes of The Con that have yet to air, and I reckon they will once ABC has a scheduling hole to fill. 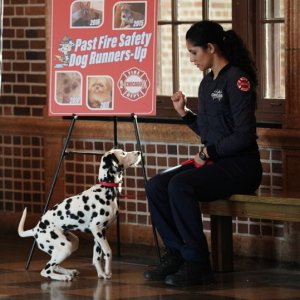 Can Chicago Fire‘s Tuesday have a cat friend, since she got along with Dusty so well last season? –Cheryl
“That’s a good idea!” Fire boss Derek Haas responded when we delivered your Q. Unfortunately, because of COVID, “we haven’t seen Tuesday this year. That’s probably been the biggest pandemic effect, because you have to have testing and all of that for all the trainers. We’ve limited our views of Tuesday, but now that you say that, I’m reminded, ‘Oh, we need to have a Tuesday episode…’ I think if we just do a one-off episode, we can get it done. But haven’t thought about a cat friend yet.”

Any scoop on Chicago Fire‘s Brett and Casey? –Jennifer
Boo, spoilers about humans. Well, coming off the last episode, “it’s not the end” of Brett and Casey, but “there’s going to be some obstacles in the way,” showrunner Derek Haas teases. “Is it the middle? I don’t know. You’ll have to wait and see.”

Can we have a scoop on the shadow following Magnum and Higgins this season?! – Fran
You will have to wait until Friday, Feb. 19 to find out who has been tailing Magnum — and why.

Talk about unfair programming! The last episode of NCIS: New Orleans was “Part 1,” and no one has listed an episode date for “Part 2.” Can you enlighten me? — Katy
Consider this my early Valentine’s Day gift: That two-parter will resume on Sunday, Feb. 14.

Do you have any scoop on Young Sheldon? –Rachel
The Big Bang prequel has cast Chuck Lorre sitcom vet Melanie Lynskey (aka Two and a Half Men‘s Rose) as Sheldon’s philosophy teacher, Professor Ericson. She’ll appear in the Feb. 11 episode, “A Philosophy Class and Worms That Can Chase You,” in which “Sheldon’s first day of college is derailed by his new philosophy teacher.” 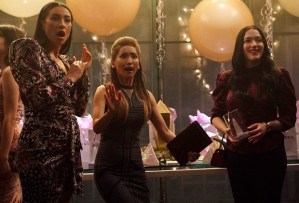 I loved the first season of Hulu’s Dollface and was thrilled it got renewed — however I haven’t heard anything about production on Season 2. Do you have any updates? –Christopher
As you probably surmised, COVID has impacted production on Season 2 of the Kat Dennings comedy, which is still very much in the works.

Anything to share on Chicago Med‘s Manstead? Since their breakup they barely shared the screen together. Should I give up hope, that this might change this season? –Mandy
Don’t lose hope. Executive producer Andrew Schneider tells us that there will be “quite a few” storylines in which the exes intersect. “Let’s just say that Natalie’s mom becomes a patient at the hospital,” Schneider teases.

Where is April’s brother, Noah, on Chicago Med? What happened to him? –Gabriela
He’s currently doing a research rotation, but “there’s a story that involves her brother Noah [in] Episode 5 (airing Feb. 3), and that causes a big rift between April and Ethan,” executive producer Andrew Schneider says.

Is Hallmark’s Signed, Sealed, Delivered ever coming back? Love that show! –Irene
As previously announced by the cabler at a Television Critics Association press tour (gosh, remember when hundreds of TV journos would cram into a ballroom?), another installment is in development. And it still is.