The addition of five new contestants on The Bachelor this Monday night had Matt James saying “Sarah who?” as he handed out roses to those he wanted to get to know better.

Sarah Trott, of course, is the 24-year-old broadcast journalist who cried about having to share Matt’s love with other contestants on a romantic reality show before giving up and packing her bags for home in last week’s installment. Matt mourned her absence in what felt like no time at all, and then quickly dug into a conundrum similar to a math test no one wants to take.

Three women — Serena P., Rachael and Chelsea — had already secured their places in Matt’s heart … for the night. But he had to decide whom among the newbies he wanted to keep around and those he didn’t. Plus, which of the 15 women without roses who had been there for weeks would stay, and who would go? Surprisingly, he gave roses to four out of five of the new arrivals and sent home Khaylah, 28, the healthcare advocate from his home state of North Carolina, and Kaili, 26, the Chicago hostess who wore lingerie when they met in Episode 1. Matt also waved goodbye to newcomer Kim, 28, the ICU nurse from Los Angeles he talked to but barely got to know.

True to form, Kaili adorned yet another revealing and tight fitting outfit, but in the end, it wasn’t enough to keep her on the show. Instead, Matt chose Brittany, 23, a romantically aggressive model from Chicago, who swapped spit with him as soon as she said hello. Later, Anna, who is also from the Windy City, decided to spread rumors that Brittany works as a paid escort, something Brittany vehemently denied.

More on that in a bit. 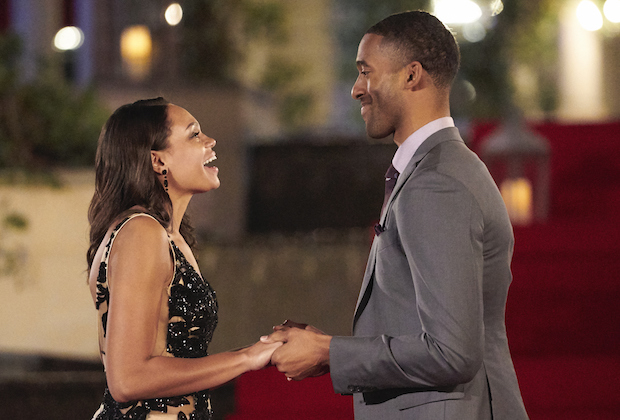 Matt also rapidly hit it off with newcomer Michelle, 27 (right), a former athlete who teaches. Dude was so smitten with the Minneapolis native that he gave her a coveted one-on-one date, much to the chagrin of the other women. Matt and Michelle. That has a nice ring to it, huh?

But as great as Matt and Michelle got along, and they really did, the producers’ decision to drop five new women into the mix is tacky and stress-inducing. Sure, the shake-up is great for catty drama and more snarky comments from villainous Victoria. But beyond that, there is no real point. Besides, how can anyone expect Matt to keep up with all of these new names and faces, much less viewers?

MATT’S BEST MOMENT | Although producers have avoided discussions on race at every turn, despite the fact that Matt is the first Black Bachelor, this episode allowed such conversations to flow naturally. First, Matt talked to Chelsea, 28, about her Black hair journey in a very honest and compassionate way. He then kissed the model and New York native with his eyes open — again — but nobody’s perfect, right? Matt also impressed when he candidly talked about police brutality and social injustice with Michelle, who touchingly unpacked the racial reckoning in her hometown of Minneapolis following the police murder of George Floyd.

MATT’S WORST MOMENT | Matt and the producers thought it would be a good idea to ask 10 threatened and frustrated women to release their tensions by punching one another in a boxing ring as a group-date outing. Really? Not surprisingly, Lauren, 29, punched the snot out of Serena P., who had to put an icepack on her nose. Ouch!

THIS WEEK’S TRAIN-WRECK MOMENT | It was cringey watching Victoria and Katie bicker over Sarah, who is no longer on the show. Victoria reveled in trashing Sarah even after Katie, 29, a banking marketer from Washington State, asked her to move on. Katie also tried to be the better person when she talked to a tearful Brittany about the sex-worker shaming rumor Anna had started. (Speaking of which, where did Anna get this intel? Are the contestants allowed to talk to friends back home while on the show, or did the producers plant that seed? We’re betting on the latter.)

BACHELORETTE STOCK FALLING! | MJ, 23, and Serena C., 24, have become rather catty as of late, which is shocking to see and unflattering. Serena C. even shed tears at the thought of Matt not giving her a rose. While he did give Serena C. a rose, the pressure of added women is bringing out the worse in her, MJ and a few others. Come on, ladies! Don’t let the producers get you down. You’re better than this.

Which lady are you now rooting for after four episodes? And do you think the ABC promos nearly did Brittany as dirty as Anna tried?