Yeah, we’re thinking Veronica is not going to want to save any of her Riverdale prom photos.

What should’ve been a night to remember for her and Archie turned into a nightmare in Wednesday’s Season 5 premiere when, at their senior prom, Archie confessed to her that he and Betty had a moment lat season and kissed. (Veronica found the song he wrote for Betty and sang it at the speakeasy, thinking he wrote it for her. Ouch.) The two lovebirds agreed to go their separate ways, and Veronica cried about her heartbreak to her mom Hermione… with her dad Hiram overhearing. (Uh-oh. Archie, watch your back.) 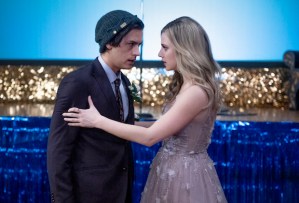 Also in the premiere: Betty and Jughead followed the trail of clues in the video auteur mystery to an underground screening of illicit films — where Jughead found his little sister Jellybean! — and the auteur struck again with a new video of a fake murder interrupting their prom. Archie applied to the Naval Academy, but lost an exhibition boxing bout to Katy Keene’s boyfriend KO Kelly (crossover!) and withdrew his application in disgust. And Cheryl and Toni won co-prom queens… but their future together looks bleak after Toni’s grandma objected to her dating a Blossom.

To make sense of all the drama, TVLine chatted with Riverdale star KJ Apa about Archie’s big bombshell (and why he dropped it) and what’s next for his relationship with Veronica… and with Betty. (For more scoop from Apa about what to expect from Riverdale‘s upcoming time jump, click here.) 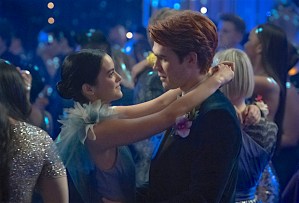 TVLINE | I have to ask you what I asked the TV out loud while watching the premiere: Why would Archie tell Veronica about what happened with Betty? Was his conscience just eating him up at that point?
I feel like if you know Archie and you’ve been watching Riverdale for a long time… it was not surprising to me when I read that. Because Archie, for the most part, is a truthful person to the people that he loves, and I feel like he’s not the best at living with guilt. He’s not the best at keeping things to himself if it’s hurting him or if he knows that it could potentially be hurting someone else. One of his flaws is that he tells the truth a lot. [Laughs] Sometimes he makes mistakes and ends up spilling the beans to everyone.

TVLINE | Is there any coming back from this for Archie and Veronica? Can they even salvage a friendship at this point?
I think so. I feel like the two of them are so strong. The reason that they are moving apart is because they realize that they are going to be living two different lives after high school. I feel like they’ll always have that special connection that they’ve had. That one thing doesn’t exterminate the rest of the history that they’ve had.

TVLINE | We saw Hiram overhearing Veronica crying about Archie, so we can assume that deputy mayor position is no longer available. Is this going to put Hiram back on the warpath against Archie?
Absolutely, yeah. And we see them kind of go for it at some point. When he learns about this, he definitely doesn’t take it lightly. Let’s just say that. 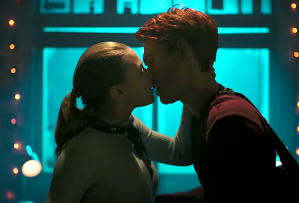 TVLINE | As the “previously on” recap reminded us, Betty is the one who called things off with Archie, not him. So does he maybe still have some unresolved feelings there?
I mean, at the point, who knows? It’s always been back and forth… I feel like with Betty and Veronica, on one hand, it’s his best friend that he’s been best friends with for his entire life and neighbors with his entire life, and then there’s this other, completely new girl who came into town and he fell in love with. So it’s one of those things: He’ll always be really close with both of them, just because of the nature of the relationship he has with both of them. But I do really feel like a lot of his relationship with Betty, and where that goes and how they feel about each other, is something that we explore in the time jump.

Alright, Riverdale fans, it’s your turn: Give the premiere a grade in our poll, and then grab a booth in the comments and share your thoughts.