The Black Lives Matter protests that flooded streets worldwide last summer have made way for one of Prodigal Son‘s most timely storylines — one in which a Black NYPD detective, JT Tarmel, becomes the target of police brutality from fellow officers.

As evidenced by Tuesday’s episode of the Fox drama, JT is not yet past the trauma of the incident, which found JT getting assaulted and choked in the Season 2 premiere by another cop who profiled JT and assumed him to be a criminal; it wasn’t until JT’s colleagues intervened, with Dani flashing her police badge, that the violent cop eased up. One week since that ordeal, JT remains hesitant to file a report against the officer, despite encouragement from Dani and others.

In fact, at the end of Tuesday’s hour, JT looked as though he might file a report, after all… only to stop in the hallway, looking overwhelmed with anxiety at the prospect.

TVLine caught up with actor Frank Harts, who portrays JT, to get insight on that hallway pause, as well as the input he gave on JT’s storyline as Prodigal Son‘s writers considered addressing police brutality.

TVLINE | I had spoken with co-creators Chris Fedak and Sam Sklaver earlier this month, and they said they consulted with you and some other cast members about how to approach this storyline. What were those conversations like?
After the situation with George Floyd and Breonna Taylor and all the rest, we started to have conversations over the summer about what it would be like for someone like me to approach playing a cop on television. Here you have a Black man, post-George Floyd, playing a Black cop on television, in a world where that representation means something completely different now. I was losing a little bit of sleep over what that was going to look like, and what that was going to mean for me, going into Season 2.

Chris and Sam were really, really great at listening to my thoughts about how we might approach that. I just wanted to make sure that the many dimensions and many colors showed through with a character like this. How do you have a guy like JT Tarmel — who has a Black son on the way, who bleeds blue, and is a military veteran — deal with a post-Floyd universe as a cop? There was no clear answer at that time, but there was a lot of sharing of feelings, and we talked about social justice issues, and they came up with what you see in Episode 2, based on our conversations and my feelings and experiences.

TVLINE | When the Black Lives Matter protests, and heavy anti-cop sentiment, were unfolding over the summer, did that have any impact on your performance between Seasons 1 and 2? Did you want to play JT differently at all in the wake of what was happening?
Up until the George Floyd situation, he’s pretty much just another soldier, just another cop. It’s not that he didn’t have to face issues along the way, but it all came to a head after George Floyd. And for me, as an actor, I really internalized the struggle with microaggressions in the world, and the systemic racism that exists within the police department. So when you have JT getting choked out because of the way he looks — even though he’s the head of Major Crimes, and a cop like all the rest — it really spoke to me in a very specific way. I saw myself mirrored through that experience, and the possibilities of what could happen to me, as a Black man in America, at any given point — especially now, with tensions being so high all over.

TVLINE | We see in this episode that JT and Dani have very different outlooks on how to handle this. For her, it’s a no-brainer that he should speak up. Why does he resist that idea?
It’s always different from the outside looking in. There’s always going to be people with ideas about how you should approach things, but the way JT sees it, it’s wonderful to have support from Dani, but he’s got a kid on the way. As idealistic as you might be about the situation, and thinking all you have to do is tell the truth and do the right thing, you know in the end that might not always end well because of the way things are set up. He could tell the truth, but he could also be fired, or put on leave, or have every fellow employee in the city looking at him negatively and trying to bring him down. He doesn’t want to lose his job and put himself — his life or his job — in danger with a kid on the way. At the same time, he does understand what he should probably do. It’s a hard choice. It’s a very hard choice. Be the company man, or tell it like it is. 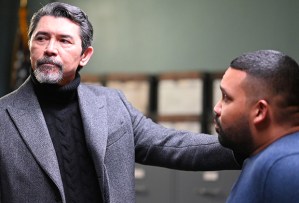 TVLINE | Near the end of the episode, JT seems like he’s going to file a report, but he stops in the hallway almost immediately. Is he having a panic attack in that moment?
At that point, it’s panic. This is a guy who’s been to war, he’s served a number of tours in the military, he’s seen a lot of things growing up where he grew up. But he has never been faced with this kind of challenge. He thought he knew exactly what his life was, until it was turned upside down. He bled blue before this, and he was all about doing his job and doing it well. This puts him in a very tough position, because it’s about whether or not to throw a fellow officer under the bus, or just leave things alone and keep things as comfortable as possible, and hope that it doesn’t rear its ugly head again. I don’t think he’s fully come to a conclusion yet, but the panic attack you see there is him trying to make that decision, and it’s an impossible one. Maybe if he didn’t have a kid on the way, it’d be a different outcome.

TVLINE | When JT tries to call for backup in that final showdown at the church, he gets absolutely no support over the radio, but we don’t hear him verbally react to that snub; he’s interrupted when he tries to tell Gil about it. What did you most want to convey when that incident happened?
It’s all those reasons why he was hesitant to file a complaint to begin with, because those are the things that can happen. In that moment, the story I was trying to tell — along with the wonderful camera work — was what it feels like to be in the middle of these two worlds: stuck in the middle between telling the truth of what happened, and also experiencing the negative aspects of that on the job, day-to-day. It’s sad but true. That’s what can happen.

TVLINE | You mentioned that JT hasn’t figured out what to do just yet. Looking past Episode 2, what can you say about how this continues to weigh on him?
That was another thing we talked about in our conversations over the summer. The biggest hope that I had was it wouldn’t be a one-off episode, and it wouldn’t be all tied up in a neat little bow by the end. Like, “Oh, racism’s solved! Let’s brush our shoulders off and move on!” It was more about how we don’t have to solve racism — we won’t, in one season of television — but how do we have that conversation in front of the American people and let it burn until it comes to the conclusion that it’s going to come to? I’m not 100 percent sure about where it will all lead yet. But I know it won’t be [tied up too neatly], because you’re dealing with Chris Fedak and Sam Sklaver, and it’s going to come to its just conclusion, one way or the other.

TVLINE | In speaking with them, it sounded like they’re working hard to address this sensitively.
Exactly, and they do. We’re going to get to see what that looks like by the end of the season. There’s so much real estate out there, so much ground to cover, and they do a very good job tapping into each character’s storyline and expanding it. I was happy to expand more of JT this season.