Prodigal Son is back, and so is the Whitly family’s insistence that everything is fine, when it most certainly is not.

The Fox thriller returned on Tuesday night after delivering a doozy of a cliffhanger last spring: Ainsley, not Malcolm, is the Whitly sibling most capable of murder, as evidenced by her brutal killing of Dermot Mulroney’s Nicholas Endicott in the April finale.

As revealed in the sophomore premiere, though, Ainsley has absolutely no memory of her stabbing spree. In a series of flashbacks to the night Endicott was killed, we saw Ainsley come out of a fugue state of sorts, desperately asking her brother — while she’s covered in blood, mind you — what just happened. Sensing Ainsley’s mounting panic, Malcolm quickly lied that he was the one to murder Endicott… and his father later walked him through how to dismember and dispose of Endicott’s body, which has since shown up (in pieces!) in Estonia. Naturally, in the wake of all that, Malcolm’s nightmares are worse than ever, his hand tremors are back, and he’s generally horrified at the memory of what he did to Endicott. (And even worse, the idea that it may have secretly thrilled him. Yikes.)

Elsewhere in the premiere, Prodigal Son sidestepped the coronavirus pandemic, but did tackle the real-life events surrounding police brutality and Black Lives Matter protests, resulting in a troubling scene in which JT was assaulted by fellow cops who thought him to be a criminal. After screening the premiere, TVLine spoke with series co-creators Chris Fedak and Sam Sklaver, who shed light on how Tuesday’s episode sets up the season ahead.

TVLINE | Is it safe to say this premiere is set in a post-COVID world? The virus is mentioned, but it doesn’t look like it’s an ongoing concern.
SKLAVER | We’re definitely in a post-COVID world. We were talking about the second season, and the topics that we wanted to address, and we decided that maybe people had had enough of COVID in their real lives, and they didn’t need to see so much of it on screen. We wanted to nod to it, but in the world of Prodigal Son, there’s been a successful vaccine rollout, and let’s say COVID has come and gone. It’s mentioned that that’s how Martin got back into Claremont, because he was early on the contact tracing at Rikers Island. There’s a little bit of escapism in our show, and I’m happy with the decision, truthfully. As we watch these episodes, there’s no part of me that wants to see any of our actors in masks. I want to see everyone in my real life in masks, but no one on screen. So we’re in a post-COVID world, and we’re a few months after our finale — maybe two to three months. Martin and Bright haven’t spoken since the acts of the finale, but life has gone on a little bit when we pick up with Season 2. 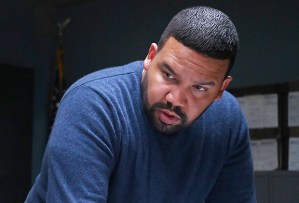 TVLINE | On the other hand, you did work in a real-life storyline with regard to anti-cop sentiment and police brutality, with JT’s experience getting assaulted. Why was that a topic you wanted to incorporate?
FEDAK | In the long prep time leading up to shooting, with the George Floyd and Black Lives Matter stories taking over the news, we knew that as a show that’s part-procedural, and a show that has cases and cops, that we would have to address this story. Sam and I are two white guys, so we don’t have the depth of knowledge in regards to this story. But what that means is, we begin to research, and we talk to our cast. I remember texting with Frank [Harts, who plays JT] early on as we’re watching the news and going, “How are we going to come up with what we have to say and how we reflect this on our show?” We go to our writers, we do research, we go to police officers who are out there doing the job today. We do have a diverse cast, and we can talk about this from the perspective of what it’s like to be an African-American cop, and what happens when something goes wrong, and then what happens inside the NYPD.

We also knew this wasn’t something you could solve in one episode, and we didn’t want to do a “very special episode” of Prodigal Son. But we also can’t solve racism, of course. So for us, it’s a challenge, but it was a challenge we knew we had to address. We’re excited that the show can do something where you go from a killer trying to kill Bright with an ax, and then you go down to this very searing moment torn right out of the headlines. And luckily for us, we have amazing writers and an amazing cast. Everyone wanted to step up to this. There was not a moment where anyone said, “We shouldn’t do this.” It was like, “We have to do this.”

TVLINE | How do the aftershocks of this assault affect not only JT, but Dani, too, since she mentioned how difficult it is to be a Black, female cop? How does this settle with them in the weeks ahead?
FEDAK | It doesn’t settle, and that’s the problem. Frank still has real-world issues. We could easily say, for our characters, “This is wrong and something has to be done about it.” But now you get into the awful stickiness of what happens next. And for Frank, he’s got a kid on the way, and he has a family, and he needs to figure out what the right thing to do is, not only for himself, but his family and his kid in the future. And Dani comes at it from a more idealistic perspective: a young police officer who knows right, who knows wrong, who thinks something needs to be done. For us, not only is it an important topic, but it’s also a very dramatic topic for our characters to address, in that they would have different perspectives on how to deal with it.

TVLINE | Let’s talk about Bright and how he’s coping with Endicott’s death. How much of Martin’s closing monologue — where he suggests that Bright may have enjoyed getting away with this murder — is accurate to how Bright’s feeling?
FEDAK | For Martin, it’s a guess. It’s a guess that his son might have been excited by this moment, that the endorphins would have been pumping, that his brain might have been opening up to the idea of, “I’m not going to solve a crime, I need to hide a crime. I need to cover it up.” It’s an intelligent guess, and for Bright, there definitely was some part of it where he felt, “This is very, very exciting.” But, Martin is also skewed from his perspective as a psychopath.
SKLAVER | There’s also a bit of inception going on, where Martin might be trying to plant an idea. Bright is having all of these emotions, and Martin’s saying, “You know, some of those emotions could be good if you let them be good, if you stopped with the morality of thinking how bad they are and moved past it.” That’s the earworming that Martin’s able to do with his son. I don’t think Bright is a killer. It’s very interesting, when people originally saw the pilot, they thought, “Oh, and Bright’s going to start killing people, too!” We were like, “No, of course not! How could he start killing people?” But his father was a serial killer, and like father, like son, the apple doesn’t fall far from the tree — there’s a reason there’s so many of these idioms. It’s because people have these thoughts over and over again, and it’s something Bright has thought about for his whole life. So in this situation, sure, he didn’t kill Nicholas Endicott, but he did everything else except the act. This is the closest we’ve ever gotten to seeing him do that, and it’s a wealth of emotions that he’s feeling, truthfully. 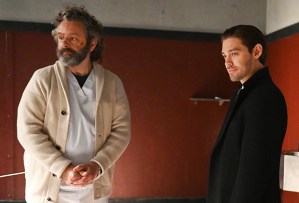 TVLINE | This premiere focuses largely on the psychological toll that Endicott’s murder is taking on Bright — but can you say whether any actual legal trouble is on the horizon, as well, now that the body’s turned up in Estonia?
FEDAK | To a certain extent, [that storyline has] been tucked away, but I’ll also promise you that there’s going to be more trouble.
SKLAVER | When we talked to one of our consultants, we asked, “What is the perfect way to get away with a murder?” And our consultant said, “If there’s no body, there’s no crime.” So if a body is completely missing, there’s nothing the cops can do. But if even a femur is found, if even a little toe is found, you can start doing research. And I’ll tell you, in Nicholas Endicott’s case, they found the whole body. So I don’t know that this is an open-and-shut case just because he showed up in Estonia.

TVLINE | And Ainsley, for her part, is acting like everything’s OK now, since she doesn’t remember what really happened. How will we see that unravel in upcoming episodes?
FEDAK | Ainsley’s always been very good at, “Everything is fine, everything is normal.” She’s always presented herself as the least affected of the Whitlys by her father’s crimes, because she was so young. But if you talk to any child psychiatrist, she was 5, and she was well old enough to know that something terrible was happening. It was something that, from the get-go, we were intrigued by, especially when you have someone like Halston Sage, who’s not only a gifted comedian and a gifted actress, but she loves the dark stuff. [Laughs] When we told her where we were going at the end of Season 1, she was thrilled. We wanted to step that out this season, and it’s going to lead to two things: It’ll lead to tension between her and Bright, and it’ll lead to a need for her to ask, should she talk to her father? Should she have a relationship with him? And from Bright’s perspective, that’s a terrible, terrible, terrible idea. But then again, so many things on our show are about people doing terrible things.
SKLAVER | Bad decisions. People make bad decisions on our show all the time. And I don’t think we’re done seeing Ainsley make bad decisions.

With that, I turn it over to you! What did you think of Prodigal Son‘s return? Grade it in our poll below, then hit the comments with your full reviews!