Mr. Wednesday followed up his epic crowd surfing in the premiere with an even more athletic feat in Sunday’s Episode 2: a vodka-fueled, slap-filled dance/altercation with Czernobog.

The spectacle takes place in Chicago, at a memorial service for the late, lamented Zorya Vechernyaya, who you’ll recall died in the Season 2 premiere. Wednesday is there to mourn his fallen friend, yes, but also to continue drumming up support for his holy war. Shadow also attends, at the request of Zorya Polunochnyaya, aka the sister who gave him the moon/his coin in Season 1.

Anyway, Czernobog is not terribly excited to see Wednesday, because he blames him for Zorya Vechernyaya’s death. But old Odin isn’t about to let hard feelings stop him from recruiting the many Slavic deities who have assembled for the wake. So words are exchanged and threats are made… and then all of a sudden, the two old gods are engaged in some rough-and-tumble feats of bellicose strength.

“Did you like that?” series star Ian McShane asked when TVLine references the scene in a recent interview. “We came up with the thing because we wanted to bring Peter [Stormare, who plays Czernobog] back in, because he’s so terrific… It’s actually Peter’s idea, the dance. The slapping came from some crazy Scandinavian dance that they used to do. You’ll have to ask him about it. Whatever. Anyway, we incorporated it with the choreography into an all-around other dance, and it seemed to work pretty well.”

Naturally, we asked McShane if he and Stormare filmed some of the more athletic choreography. He laughed heartily in response. “You must be joking! No, we did the slapping. Actually, we only did, like, three takes of the dance. So it worked out pretty well,” he recalled, still chuckling. “Natural dancer.”

* On his way to Chicago, Wednesday stops to see Tyr, the Norse god of war and justice, who’s masquerading as a pediatric dentist named Dr. Tyrell. (Tyr is played by American Horror Story‘s Dnis O’Hare.)  Tyr writes him a check to support the war effort, but is dismayed to realize that Wednesday stole a postcard from his office. 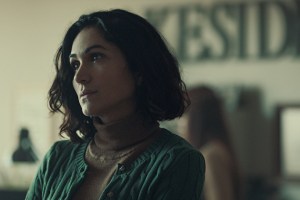 * Shadow rents a car from Marguerite Olsen, his frosty neighbor, so he can drive to Chicago. On the way, he hits a deer; Shadow is OK, but the vehicle is damaged. When he arrives in the Windy City, he spends some time on a rooftop with Zorya Polunochnyaya, who offers him cryptic advice (“When you cannot see your way, the night sky will guide you”) and then puts his coin up back up into the sky as easily as she’d plucked it down.

* Poor Salim thinks The Jinn left because Wednesday sent him on a mission. Wednesday neither confirms nor denies it.

* In her special way, Bilquis absorbs the tech CEO she’s been sleeping with. But the moment he’s fully inside, something is wrong. She leans to the side of her bed and vomits, then looks like she’s in extreme distress. 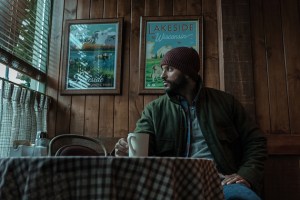 * Back in Lakeside, Shadow doesn’t understand why everyone who’d been so kind and welcoming when he arrived suddenly scowls at him like he’s a criminal. Welp, it’s because they think he’s a criminal. While he was away, a local teen named Alison McGovern (the girl who helped Shadow at her father’s store earlier in the episode) went missing. Chad the Cop questions Shadow about where he’s been, why he had his windshield replaced, yadda yadda. He’s eventually cleared of any suspicion.

* Later that night, while Shadow is gathering wood for his fireplace, he sees a peacock in the woods. When he returns to his apartment, a conciliatory Marguerite is there, apologizing for how they’d gotten off on the wrong foot. He shows her that he got the body shop to save a decal that was affixed to the windshield; she tells him that her son is at school in Florida, but doesn’t volunteer any more information.