In the 13 years since Iron Man first hit theaters, Marvel Studios has established quite well its ability to nail a big-budget popcorn movie. The proof, outside of gargantuan box office numbers, is right there in those Avengers: Endgame audience reaction videos that circulated last spring; Marvel’s got the best action scenes in the superhero game, and it’s been regularly thrilling fans with that level of spectacle for more than a decade.

And yet, with WandaVision — the studio’s very first TV series, premiering Friday, Jan. 15 on Disney+ — Marvel’s proven, perhaps surprisingly, that it can nail a different format entirely: the classic sitcom. In fact, the first three episodes that I’ve seen contain none of the usual Marvel trappings — no fight sequences, no CGI villains — and the result is an intriguing, fresh, genuinely delightful deviation from what we’ve come to expect.

WandaVision, as the title suggests, stars Elizabeth Olsen and Paul Bettany as their respective Marvel Cinematic Universe characters. (Among the show’s many mysteries is how Vision can even exist here, given his death in Avengers: Infinity War, but Bettany assures us that will be solved.) For reasons that are unclear but presumably ominous, they’re the protagonists of their very own sitcom; each episode pays homage to beloved comedies from a different decade, all while maintaining an undercurrent — for both viewers and the two main characters — of, “Say, what’s really going on here?” 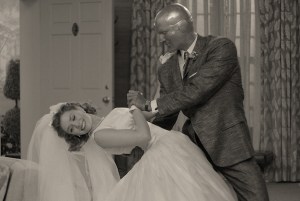 It’s rare to encounter a TV show that remains enjoyable in spite of how little information it gives the audience. The first three episodes offer only hints of what’s behind Wanda and Vision’s bizarro universe, yet it remains compelling in the meantime. WandaVision so perfectly encapsulates the retro sitcoms it’s honoring that even as you’re desperate to know what’s really going on, you can’t help but delight in its main characters’ earnest, old-timey antics. (That said, I have to wonder if the show would have been better suited for a binge release, rather than a weekly one — though it’s obvious why Marvel and Disney+ would want to wring weeks’ worth of discourse out of this show.)

Anchoring the series’ unusual premise are excellent, completely committed performances from WandaVision’s cast. Bettany is a gem, bringing a charming goofiness to Vision that he hasn’t been able to showcase in the MCU films, while Kathryn Hahn (Transparent) and Teyonah Parris (Survivor’s Remorse) shine as Wanda and Vision’s new, and nosey, pals in Westview.

But the show really belongs to Olsen. In channeling sitcom legends like Lucille Ball and Mary Tyler Moore, the actress delivers as fearless and dazzling a comedic performance as those icons before her, punctuated by Wanda’s wide-eyed worry that something isn’t quite right with her reality. Olsen previously wowed us in her most recent TV project, the now-cancelled (and underrated) Sorry for Your Loss, and it’s a treat to watch her showcase so many skills here.

As with any Marvel project, WandaVision is primarily designed with MCU fans in mind, though casual viewers can more or less jump right in with no prior knowledge. (Everyone on this show is confused, too, so that helps.) But don’t let the show’s outside-the-box approach worry you: Yes, WandaVision is unlike anything Marvel has done before — but it turns out that’s a very good thing.

THE TVLINE BOTTOM LINE: Featuring magnificent performances and spot-on sitcom homages, WandaVision is a big swing from Marvel Studios that’s as enjoyable as it is risky.