Recently, a friend asked me what Tiny Pretty Things — the new series I’ve been mainlining for reasons we’ll get into in a moment — was all about.

“Ballet, bitches and butts,” I said, with zero shame. (Note to Netflix, which streams the show: Feel free to use that as a blurb!)

My friend knew to ask because she’d noticed that the new drama is set at a dance school, and she’s aware that I have a… let’s call it a totally-not-troubling! need to ingest pop culture dance content.

Have I ever taken more than a handful of the most rudimentary ballet lessons? Nope! Can I stand in first position for more than 30 seconds without my legs starting to tremble like a bowl of Jell-O atop an imbalanced washing machine? Not a chance! Am I perhaps, at this very moment, wearing these comfy, warm-up booties because New York City principal dancer Sara Mearns sports them on Instagram? Maybe!

The cycle repeats every few years: A ballet-centric movie or TV show will come out, and no matter whether it’s award-winning artistry or total trash, I’m soon revisiting my dreams of gliding across a stage on pointe. The 2000 film Center Stage shines like a Swarovski-studded tutu as the epitome of my dance delusion, but there are so many others pirouetting in its wake.

The movie Black Swan introduced me to the beauty that is Rodarte’s awesome open-knit arm warmers and the horror that is watching Natalie Portman stay perfectly in character while a physical therapist manually cajoles her actually dislocated rib back into place. Starz’s Flesh & Bone series — which really, really wasn’t what its trailer made it seem — at least had footage of grueling company classes and Ben Daniels screaming a lot.

The CW reality show Breaking Pointe, the Step Up movies, Robert Altman’s The Company, Disney+’s On Pointe — sign me up for all of it. When and/or if the Center Stage TV show ever comes to fruition, you’d better I’ll have massive riding-my-motorcycle-onto-a-Lincoln-Center-stage energy about that one, too. 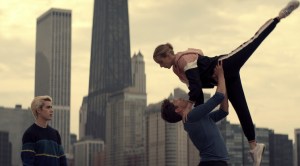 But back to Tiny Pretty Things: It’s scratching my ballet itch these days for two reasons. Just like many of the titles I just listed, A) The dancing is gorgeous. B) Pretty much everything else is a mess.

I say this with love! Imagine if you took the pilots for a murder mystery, a high school drama and a haves-vs-the-have-nots primetime soap, then you put ’em in a blender and gave the resulting mishmash a Freeform budget. Throw in some bloody feet, a lot of bare booty and sprinkle the conglomeration with words like developee and chassé­, and you’re getting a sense of what I legitimately enjoy about this legitimately not-great series.

And wait — I haven’t even told you the plot yet. We enter the world of Chicago’s Archer School of Ballet via Neveah Stroyer, who wins a spot at the coveted academy after another student — Cassie Shore — falls from the rooftop and winds up in a coma. Was Cassie pushed? And if so, who did it?

Given the roster of her jealous, two-faced classmates, it could be anyone. Her roommate June? Her possibly psycho boyfriend Nabil? Her biggest competitor Bette? Or was it Ramon Costa, the bad boy (yet make no mistake, full-on adult) choreographer who was probably sleeping with Cassie and definitely keeps getting anonymous texts threatening to expose him for… something? Or school director Monique “Call Me Madame” DuBois (played by Lauren Holly), who’s shtupping one of her students? 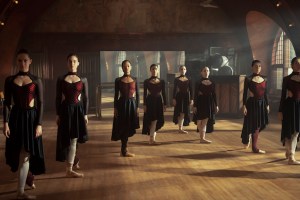 OK, put that aside for a moment, because we haven’t even gotten to the dorm-room sex triangle involving Bette, her boyfriend Oren and his gay roommate Shane. Or the fact that Bette’s nascent dance career is being held together by Vicodin and lies, thanks to the injuries she’s hiding from the school’s staff. Or that Ramon thinks, at this school at this time, the best fodder for a commissioned ballet is Ripper, a balletic retelling of Jack the Ripper’s greatest hits.

Please understand that everything I just listed is about half of what’s going on, plot-wise, in Tiny Pretty Things‘ first season. And it’s tough to keep track of who’s feeling which way about whom — much less who’s likely to have attempted to kill Cassie — because the relationships among the students shift from friends to frenemies to outright foes and back with startling speed. BUT THOSE TUTUS, THO.

Toward the end of Episode 4, Ramon angrily addresses his students at the start of a rehearsal, calling them, “just a company of dancers, facing their own, immeasurable darkness” — a summation so unaware of its grandiosity that it could double as a tagline for the series. And who’d ever want to watch 10 episodes of that?