At the end of a harrowing hour that counted Dr. Kit Voss, beloved Nurse Hundley and Devon’s father, Tejan, among those who’d contracted the virus, it was revealed that Kit and Hundley both recovered, while Tejan ultimately succumbed to the disease; Devon, who was unable to visit his dad at the public hospital where he was being treated, was forced to say goodbye over a video call, in one of the episode’s many reflections of real-life circumstances.

Like some other series that have opted to depict a post-COVID reality (including fellow medical drama The Good Doctor), The Resident opened its fourth season “sometime in the future, when the COVID-19 pandemic is history,” per a title card that appeared ahead of the episode. In the present day, as Conrad and Nic got ready for their wedding ceremony, a series of flashbacks showed the early days of the pandemic at Chastain Park, including a dire shortage of personal protective equipment (PPE) and the enormous financial toll of cutting back on elective surgeries and other procedures.

But there was time for some joy in there, too: Conrad and Nic were married in a lovely, emotional outdoor ceremony… and after AJ revealed at the reception that he’d split from girlfriend Andrea, he and Mina shared their long-awaited first kiss. “This changes nothing,” Mina smiled, insistent on keeping their working relationship intact. Below, co-showrunner Peter Elkoff weighs in on the premiere’s big developments — and suggests that Mina and AJ’s kiss won’t mean what you think it does.

TVLINE | The TV medical dramas that have opted to write in COVID-19 have all taken slightly different approaches. Why did moving past the pandemic, then showing it via flashbacks, feel like the right fit for The Resident?
Using the wisdom and prescience of our doctors, part of it was to consider what we believed would be the circumstances in the country, come January. What world would we be airing in? We felt that we didn’t want to tell a season’s worth of COVID stories. We didn’t want to take our viewers back to the early and middle parts of the pandemic. It felt like there was a way to show our respect for the frontline workers — for the experience, what so many of our citizens suffered through — and move on. We decided — because we wanted to do this wedding with Nic and Conrad — that we would open up in a world where we’re saying that COVID is now in the past. Sure, there’s stragglers and cases and things, but we have come through the fire. And then we tell the story of the day of their wedding and flash back to salute what we all went through. It just felt like we could give the pandemic its due, but also tell more hopeful stories and present our doctors as the heroes.

TVLINE | And some of your writers work in the medical field, correct? Were they stationed at hospitals during the pandemic?
One of our writers, Daniela Lamas, is a pulmonologist, a lung specialist, who works at Brigham and Women’s Hospital in Boston. And when we Zoom with our writers’ room, she’s in a room at the hospital where she can find some peace and quiet to take part in it. And then she’s literally out the door, with the sickest people in that city. 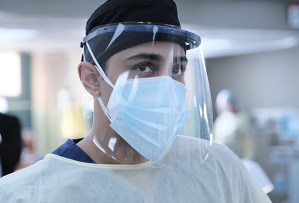 TVLINE | Since you were consulting with doctors who were seeing these things firsthand, were there any details of the first responders’ experience where you felt, “OK, we definitely need to include this in our depiction of the pandemic”?
We had a wealth of things. A lot of the things that, as writers, you really love — I don’t know if you remember, but there’s a scene in the premiere once we’ve flashed back [to COVID], and [the doctors] are all pulling their masks out of paper bags that are attached to the wall. There was this great PPE shortage in the early part of the pandemic, and what our doctor on staff, Daniela, told us was that sometimes they kept their masks for days in a paper bag at work. You’d sometimes wear a mask for two, three, four, five days, when you didn’t have enough. That ultimately changed, but those kinds of small details — because it was visual, and you saw this wall of paper bags — we love that kind of stuff.

And people looking at their relatives… the idea that people were so isolated was really the core of the emotional strength of the episode — that you’re not allowed to be with your family members or your friends, or you’re stuck outside of the hospital. There’s a family that’s watching the patriarch die, they’re on FaceTime, and the Devon story, where at the end, he’s watching his own father pass away. He’s remembering it nine months later, when he can’t go to the wedding and he’s going to the memorial. Those things, the realities that we were gifted with by Daniela and our other doctors — we have an emergency room doctor, as well, Josh Troke — there’s no replacement for that kind of reality.

…What has really been the focus for us this season… there’s always been a villain in the world of medicine for The Resident. There was the bad doctors in Season 1, the medical devices in Season 2, Red Rock in Season 3. And this is a season less about villains and more about solutions, and the heroism of doctors, which is really what the pandemic made us understand we had to tell stories about. It’s about great doctors and emotional cases, and the emotional lives of our doctors… less about the medical system being broken, though we have our moments when we touch on that.

TVLINE | You mentioned Devon’s father passing away. How much did you debate whether to have a character die of COVID at all?
We knew we wanted to set up… not a thriller, but a bit of a mystery and stressful moment for the audience, when we see Kit Voss get sick at the end, and Hundley is the main patient through the episode, and we know Devon’s father was sick. We wanted to create a sense of, “Did we lose somebody?” and we’re going to find out at the wedding who that might be. That was the idea. We weren’t going to kill one of our main characters. [Laughs] But we did want it to be somebody who would really give us an emotional punch. We’ve played Devon’s relationship with his parents over the seasons, and we understand it’s a complicated relationship. We’re using it, going forward, to tell a little more about Devon’s emotional life, and also this transition from a private to a public hospital that we’re making during the early part of the season. That gets at a lot of what The Resident does best, those flaws of the system and the complications that money brings to the medicine. 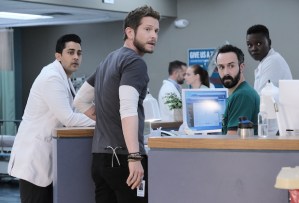 TVLINE | In watching the premiere, I was struck by how normal it all looked, even though I know you’re filming under strict COVID protocols. I imagine Conrad and Nic’s wedding was especially challenging.
Oh my God, it was all a challenge. My partner, [co-showrunner] Andrew [Chapman], was down there for part of the first block, and I went down for the second block of episodes. And television sets are really fun places to be — they’re super convivial, and you’re at craft services, and everyone’s talking. But it wasn’t like that. I was wearing two masks and a face shield when I was on set, and so were most of the crew. The Disney [Television Distribution] protocols that were set up to make it safe to shoot were really good. We’ve had positive tests come back on our show, as everyone has, but we have had nobody transmit COVID to anyone else on set. What we’ve been doing for safety worked. And nobody was on set without a mask. Obviously, there’s kissing scenes here and there. [Laughs] But everybody’s been tested, and it was a very rigorous process to make those sets safe. Everybody has a mask on until the moment the camera comes on. But it was strange, and we did have fewer extras. And people are just a little bit farther apart than they normally are. There’s a lot of conversations across hallways. [Laughs]

TVLINE | Speaking of kisses, Mina and Raptor finally have their first in this episode. I’ve spoken with some of your fellow producers over the seasons, and there was a distinct feeling that putting those two together romantically would be a fine line to walk — perhaps even something the show would never do — given their mentor-mentee relationship and their dynamic in the hospital. Why was now the right time to take that step?
I’m not going to commit to the fact that we actually put them together. [Laughs] But they did kiss! You know, it’s that Moonlighting law — that show went downhill when Bruce Willis and Cybill Shepherd started having a relationship. Now, that was a two-hander, and that’s not our show; we’re an ensemble. But there are reasons why it felt like, in the fourth season, we could tell a more complicated story between those two — and some things I can’t reveal until we get farther into the season, but those reasons will become evident — and the simple fact that we wanted to give the audience something they were hoping would happen.

Your turn, Resident fans! How did you feel about the Season 4 premiere? Grade it in our poll below, then drop a comment!