Star Trek: Discovery capped off its third season with a very well-deserved promotion in rank. Thursday’s finale saw Burnham lead the Discovery crew in a fierce fight to retake the ship from the evil Osyraa and save the Federation — and she was ultimately rewarded by being named the Discovery‘s new captain. She’ll now lead the Discovery as it ships much-needed dilithium to distant planets, now that the mystery of The Burn has been solved. (Read our full recap here.)

So what’s next for Burnham and the Discovery? (CBS All Access renewed Discovery for Season 4 back in October.) TVLine chatted with Discovery co-showrunner and executive producer Michelle Paradise (who wrote the finale) about Burnham’s big promotion, and we also hit her with a couple of nagging questions, too. Is Stamets’ grudge against Burnham going to last? And is Saru still a member of the Discovery crew, since he was conspicuously absent at the end of the finale? (Plus, we had to ask about Grudge the cat.) Read on to get answers, fellow Trekkies.

TVLINE | The season ends with Michael in the captain’s chair, which has been a long time coming. We kind of always knew she would get there, but why is this the right time for her to lead this ship?
It just felt like the right time to do it. It felt like we have taken her on this incredible journey over the course of three seasons, and we knew at the start of Season 3 that that’s where we wanted her to end up. It’s something that I think people have been expecting from the time the show started, and so when we began Season 3, the conversations we had were: Well, if that’s where we want her to go, how far away from that can we take her at the top of the season, so she has the most satisfying Season 3 arc possible, but so that it also pays off the journey that she’s had over the course of Seasons 1 and 2? So giving her the opportunity to come into this new future and be here for a year without the rest of our heroes on Discovery, and allowing her to grow and change during that time and come back and figure out where she fits in, it felt like the right kind of journey for the character. It also allowed us, over the course of Season 3, to find new layers for that character, and of course new layers for our amazing actress to play. 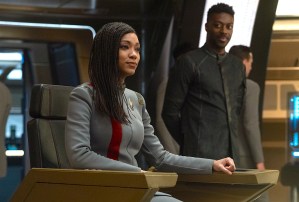 TVLINE | So under Captain Burnham, the Discovery is now tasked with delivering dilithium to far-off planets. Is that the template for Season 4?
I can’t really talk about Season 4 specifically, but thematically, Season 3 was all about connection and disconnection and finding our way back to one another. And The Burn made that impossible in many cases, because civilization simply didn’t have the means to reach one another. So that felt like an important journey to start at the end of our season: How do we press forward in the process of reconnecting worlds with one another? That felt like the important first step. Now that they have a cache of dilithium, and certainly they’ll have to be responsible to not repeat the mistakes of the past and just overuse it, but it felt like the right place to both end the season and tee up whatever is to come.

TVLINE | You ended the episode with a quote from Gene Roddenberry and the old-school Star Trek theme music. Was that a way to connect the finale back to those Trek roots?
Yeah, in everything we do, we’re always thinking about the original Trek roots, and what Gene Roddenberry began, what he established with the original Trek series… it’s hard to overstate how groundbreaking it was at the time. And of course, it continues to influence all of the Trek series since then. The quote in particular, that was something that came up later in the editing process. Just given what’s happening in the world today, that just felt like that would be an appropriate message to end our season on, especially coming from him. 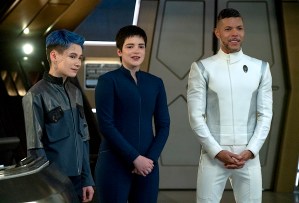 TVLINE | You didn’t even know how appropriate it would be this week.
I know! This whole season has really resonated in a way we obviously never could’ve expected. When we were writing all of this, there was so much division and so much disconnection, but we never could’ve foreseen the pandemic coming. So to have that happening at this time, when we were already thematically treating some of the things we were experiencing then, but we’re experiencing so much more intensely right now… I think that goes back to some of the roots of the original series and what he did by taking a look at what was happening in society and using sci-fi as a way to reflect some of that, and speak to it and comment on it and to say, “The challenges we’re having, we can overcome them. It doesn’t have to be as divisive as it is.” All of that still resonates today, for sure.

TVLINE | It was all smiles at the end, but I did notice Stamets snubbing Michael a bit. It seems like he’s still holding a grudge against her for putting Hugh in danger. How serious is that rift?
I think that’s one they’ll get past in time. It was a very emotional and deeply personal thing for Stamets: “Wait a minute, we’re going to push pause on going back for them? We can’t do that!” Burnham, of course, absolutely loves Culber and Adira and Saru, but also knew that if they made that choice in the moment, there wouldn’t be a Federation to come back to. And for Stamets, it was just that personal need. Thankfully, she and the crew found a way to do both, but he was obviously still having some emotional responses to that. But I expect him to get past that.

That was one of those things, by the way, that we, over the course of Season 3, wanted to do was make sure that our characters, whatever they were experiencing, that their emotional responses were grounded, and that we didn’t blow past things. So having Stamets have that kind of emotional response in the moment felt realistic. It felt as realistic as having our crew challenged by coming to this new future and crash-landing, and it’s not what they expect. So we wanted to try and find a way to look at those very real emotional responses in the midst of the sci-fi storytelling.

TVLINE | I didn’t see Saru on the bridge at the end. Just to confirm: He is still a part of the crew? Can we count on seeing him in Season 4?
Yes, he is absolutely coming back. The end of the season for him was about returning to Kaminar to help Su’Kal, so he was not there at the end, but we are not letting Doug Jones go anywhere. He’s definitely back in action for Season 4. 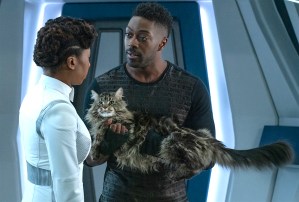 TVLINE | Book made quite an impact this season, as did his cat Grudge, and it looks like they’re part of the Discovery crew going forward. What did he bring out in Burnham as a character this season, and where do those two go from here?
First of all, David [Ajala] is phenomenal. We were so fortunate to have him join us this season. I think coming into this season, we knew that we wanted to explore different sides of Burnham. We wanted to give her a chance to grow and to change, and to give Sonequa [Martin-Green] an opportunity to play new things with her. In earlier seasons, she had kind of a fraught relationship with Tyler… “fraught” is the gentle way of saying it. It was very tumultuous. We knew this season, when we started talking about Book, that we wanted him to be someone who could bring out other sides of her. The tone of that relationship could feel different and could feel fun and light. She hasn’t gotten to have a lot of fun before. [Laughs] So we wanted to give her that, and see: What does that bring out in her, and how does that change her? I think the relationship the two of them have, they are able to push one another in new ways and help one another grow, and that was really exciting to find over the course of the season. So I think coming into Season 4, they’ll definitely have new places to go.

Then of course, you mentioned Grudge, who is by far the breakout star of any Trek series ever. I think at some point, we just need to name the ship after her. [Laughs] The U.S.S. Grudge. Spoiler alert, Season 4: We’re going to change the name of Discovery. That’s been amazing. I love how people respond to that cat! And it’s a great cat.

Got thoughts on the Discovery finale? Beam down to the comments and share ’em!