Star Trek: Discovery ended Season 3 with a bang, as Burnham and her crew battled to preserve the future of the Federation… and a familiar face landed in the captain’s chair.

Thursday’s finale picks up with our heroes in a perilous position: Saru and Culber are still stranded in that nebula with the childlike mutant Su’Kal, who seems to hold the key to The Burn, while Michael and Booker are trapped aboard the Discovery with Osyraa at the helm as the Federation prepares to fire at them. The radiation is taking its toll on Saru and Culber — Su’Kal sweetly tries to heal Saru’s wounds with seaweed — and Adira thankfully arrives to give them medicine that buys them a little time. (Gray is there, too, and everyone can see him!) But they have to act fast: The ship they’re in is falling apart… and so is the Discovery, once the Federation starts unloading on it.

As Osyraa takes heavy fire, she orders a truth serum for Booker so he can lead her to the dilithium-rich planet. She’s done negotiating as well: “I want the Federation obliterated.” Tilly and the Sphere data robots are blasting their way towards the bridge, but Osyraa seals them in and shuts off the life support. (Uh-oh.) Stamets can’t get the Federation to cease fire, but Michael convinces Admiral Vance to stand down by reminding him the spore drive is only valuable with Stamets onboard: “I won’t let you down. Let us go.” Vance does, and Osyraa gets ready to engage the warp drive. She still won’t restore the life support, though. 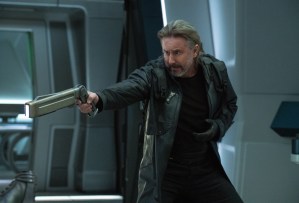 That jerk Zareh has Booker strapped down and wants to put a painful neural lock on him to get the dilithium planet’s location. Michael can only look on as her beloved Booker screams out in pain, and she finally gives in, promising to get him to talk. When she approaches Booker, though, they attack the guards and put up a force field that allows them to escape. (Tilly hears the code red signal and smiles, knowing it’s Michael.) Michael sends her a cryptic message about birthdays and fireworks, and that gives Tilly an idea: They can use a thermochemical bomb to knock the ship out of warp and let their allies catch up. It’s a suicide mission, yes, but “we can die here, or we can die stopping Osyraa and saving the Federation.”

Back in the nebula, Saru offers to cook a traditional Kelpien dish for Su’Kal, explaining that he’s actually Kelpien as well. He tries to talk to Su’Kal about the outside world, but Su’Kal doesn’t like it because the Federation was supposed to rescue him: “If outside exists, why didn’t they?” Saru faced the same tough choice himself once, he says, to stay home or step out into an uncertain future. The smoke monster rematerializes, and Saru encourages Su’Kal to confront it, once and for all. Plus, Culber has solved the mystery of The Burn: Su’Kal’s genes have mutated to interact with dilithium, and his scream travels at the same wavelength as dilithium, which caused the massive explosion. That ship of theirs is hanging on by a thread, though…

Tilly and her fellow crew members are hanging on by a thread, too, with their oxygen running low. She enlists Owo to take all their remaining oxygen and finish the job while the rest of them pass out. Michael and Booker get to a turbolift and, once they’re cornered, sneak outside and start picking off their assailants. Michael leaps down and lands on a passing lift, ending up in a room with Osyraa, and those two fight it out while Booker and Zareh do the same in the lift. (Yeah, double fight!) As Owo plants the bomb and knocks the ship out of warp, Zareh dares to say something about hurting Grudge, so Book swiftly kicks him to his death. (“She’s a queen!”) While Osyraa gets the upper hand on Michael, she comes back with a phaser blast that kills Osyraa: “I never quit.” She reboots the ship’s system and restores life support. Everyone’s safe! 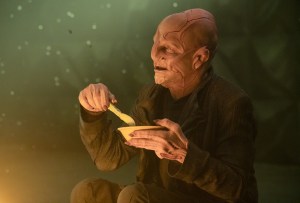 Su’Kal is still afraid to turn off the holo and face reality, but Culber tells him it’s OK to be afraid. The Kelpien tentatively steps into a new room and puts his hand onto a computer to end the simulation, accessing the archives to see his final moments with his mother. As she died, he let out an incredible scream… and yep, that’s what caused The Burn. Now he sees Saru’s true face, as a fellow Kelpien, and they touch foreheads tenderly. Su’Kal’s mother wanted him to get back to Kaminar and see his parents watching him from the stars… and they get that chance when Michael’s voice comes through — they ejected the warp core and blew their way out of the Viridian — and she beams them aboard to safety just as their ship crumbles.

All’s well that ends well: Everyone is all smiles back on the Discovery, and Michael reminds us that “the need to connect is at our core.” (Stamets is still nursing a grudge against her, though.) Reno gets the Sphere data robots up and running, and the Federation is piecing itself back together. Saru takes Su’Kal to Kaminar to see the stars, and Admiral Vance apologizes to Michael for standing in her way. He says Saru wants her to be the Discovery‘s next captain, and “I do, too.” She’s overwhelmed and wants to wait for Saru’s return, but there’s no time: They have lots of dilithium to deliver to distant worlds. So she takes the bridge as captain — with her and her crew in sleek new 31st-century uniforms — and the ship sets off with her command: “Let’s fly.”

Alright, Trekkies, it’s your turn: Give the Star Trek: Discovery finale — and Season 3 as a whole — a grade in our polls, and then beam down to the comments to share your thoughts.