Thursday’s Call Me Kat is short on laughs, but not on karaoke. Or diarrhea jokes!

In the Miranda remake’s second episode, Sheila sets Kat up on a blind date with Brandon, a man she just met at the horse track. But he’s not just any man — he’s the track announcer, which tickles Kat’s fancy. Ahead of their date, Kat attempts to keep their text chain sweet and flirtatious, so she tells Brandon she’ll be there even if she still has diarrhea. [Editor’s note: She doesn’t have diarrhea.]

Later on, the owner of the cat café considers shooting off a second text to Brandon, offering to let him come back to her place and pet her new kitten, which is not a euphemism. Luckily, she doesn’t hit “send” this time. Even more lucky: Brandon hasn’t new-phone-who-dis’d her yet. In fact, he thinks the 💩 text is totally “LOL.”

At the piano bar, Max invites Kat, Randi and Phil to karaoke night — and he won’t take “no” for an answer, especially from Kat. We’re told there used to be a piano in their college dormitory, and they’d sneak downstairs at all hours of the night to play the loudest version of Billy Joel’s “Piano Man” you’d ever heard, which I’m pretty sure is a crime against humanity. Kat tells Max she’ll be there, but it’s the same night she’s supposed to hang out with racetrack dude. Randi tells her not to worry: She can hang out with Max at the start of the night, then meet up with Brandon at the end of the night — easy peasy.

After Randi helps Kat settle on an outfit, she heads out to The Middle C, where Max presents her with a setlist. Together, he and Kat perform “Piano Man” (just like old times), “Reunited” (by Peaches & Herb) and “Gloria” (by Laura Branigan) — and it’s easily the best part of the episode. Soon enough, Kat decides that she’s having such a good time that she’s going to blow off her blind date and spend the rest of the evening with Max and see where things go. What she doesn’t expect is for Max to open up and admit that he’s still hung up on his ex, and he’s determined to win her back.

The next day, Kat visits Brandon at work and offers him a box of apology pastries for cancelling on him at last minute. But when she asks if he’d consider a make-up date, he tells her that he’s married (!), and there must have been some sort of misunderstanding. He only agreed to meet with her because he thought she could give him some pointers on starting his own business. When Sheila catches wind up of Brandon’s married status, she offers to set her daughter up on yet another blind date — this one with a Zamboni driver, so things are looking up! 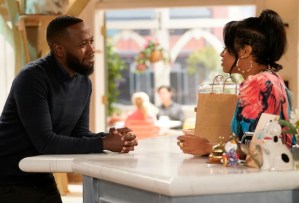 There’s also a B-story involving Randi’s feud with Daniel, a costumer who never tips, played by New Girl vet Lamorne Morris. There’s clearly something brewing between the barista and the cheapskate, but I was too consumed by the idea of a New Girl spinoff where Winston quits the LAPD and opens a cat café to focus on their budding flirtation. (Fox, please make the Winston/cat café show.)

OK, now it’s your turn: What did you think of Call Me Kat Episode 2? Did it improve on the pilot (which earned a TVLine reader grade of “C-“)? And for those of you who have seen the BBC comedy Miranda on which Kat is based, does it feel like the show is starting to establish its own identity? Grade the half hour via the following poll, then drop a comment with your full review.