Have you ever felt like a plastic bag, drifting through the wind, wanting to start again?

The Big Bang Theory grad headlines Fox’s Call Me Kat, a loose remake of the beloved British sitcom Miranda that counts original series star Miranda Hart among its executive producers (along with Bialik’s former TV hubby, Jim Parsons). In a moment, we’ll want to hear what you think of the Stateside adaptation — but first, a brief recap of the series premiere:

In the wake of her father’s death, Kat decides to ditch her successful career as a math professor and use her life savings to open a cat café in Louisville, Ky., which she runs with the help of her trusty employees, Phil (Will & Grace vet/Instagram sensation Leslie Jordan) and Randi (One on One‘s Kyla Pratt). Kat’s mother, Sheila (Mike & Molly‘s Swoosie Kurtz), fears her daughter’s career change is a step in the wrong direction, and doesn’t think the 39-year-old will be truly happy until she finds herself a husband. The “rad cat lady” tries to convince her mom otherwise — through song, no less! (cue Katy Perry’s “Firework”) — but does herself no favors when she tries to pass off the openly gay Phil as her much older boyfriend at BFF Tara’s (BH90210‘s Vanessa Lachey) vow renewal. 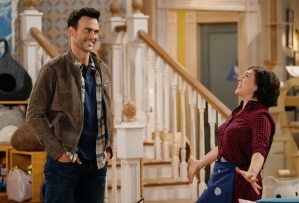 Kat’s single-forever plans are potentially dashed when college crush Hot Max — err, Max (American Horror Story‘s Cheyenne Jackson) — returns to Kentucky after a decade in Europe, where he recently got out of a longterm relationship. After multiple run-ins — first at the local pub where he currently tends bar, then at Tara’s wedding reception — Max heads over to the café and asks Kat if she’d like to catch up over dinner. The excessively excited Kat takes him up on his offer, then accidentally kicks him in the face, potentially breaking his nose.

Before you weigh in with your first impressions, here are a few potential talking points for the comments section:

* For those of you who aren’t familiar with the original Miranda — the BBC sitcom is streaming for free on IMDBtv — what did you think of the constant fourth wall-breaking? What about the cast introductions at the end of the episode?

* For a sitcom set in a cat café, weren’t you expecting there to be more cats? 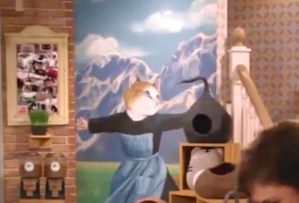 * Do you buy Mayim Bialik and Vanessa Lachey as lifelong BFFs?

* The Sound of Music painting (pictured, right): the stuff of nightmares, or a purrrr-fect work of art?

OK, you have your marching orders. Grade the Call Me Kat premiere below, then drop a comment with your full review.