The explosive throwdown between Cobra Kai and Miyagi-Do has turned the entire Valley upside down. And the rivalry has only just begun.

In the Season 3 premiere (all 10 episodes now available on Netflix), both the karate kids and adults are reeling from the effects of the brutal fight — or the “karate riot,” as the local media has dubbed it — at West Valley High, and trying to come to terms with the individual role each of them has played. The tussle not only put Miguel’s future in jeopardy, but the aftermath rang loudly throughout the community, tarnishing the Miyagi name, disrupting the school’s welfare and turning former friends into mortal enemies.

If you’ve seen the trailer for Cobra Kai Round 3, you’ve already gotten a sneak peek at Miguel’s fate. But let’s recap Episode 1 from the top, and find out just how the dojos are faring in the wake of the “Aftermath.”

We begin in Miguel’s coma-induced dream, where he’s battling an assailant in what could very well be the fight for his life. It’s two weeks after the school brawl which left Johnny’s prize fighter hospital-bound and son Robby on the run, yet the sensei is exactly where you’d expect him: sitting at a bar arguing over the difference between Coors Light and Banquet. He’s looking super scrubby as he picks a bar fight and Hulk-smashes another patron’s car window. Despite his anger, he’s waaay too drunk to fight, so naturally, he gets his ass kicked and gets tossed in the slammer. 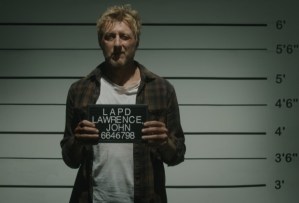 On the LaRusso front, Sam is suspended for two weeks, and Amanda is pissed. Daniel promises he’ll figure it out, as the two walk into a PTA meeting, which might as well be a firing squad aimed directly at the LaRussos. The “karate gangs” have gotten a rise out of all the parents, causing the PTA to ban the martial art outright. When Daniel tries to argue against a “karate Footloose,” the crowd quickly turns on him. It’s an all-around uproar in the Valley.

Back at school, it’s clear the beef between Cobra Kai and Miyagi-Do isn’t going away anytime soon. In a conversation between Moon and Yasmine, we learn that Aisha’s parents moved her to a private school and even put their house up for sale (Is Aisha gone for good? Hear what the show’s EPs had to say.) When Sam gets to school, she immediately has flashbacks of Miguel falling over the railing. The psychological damage she’s experiencing has clearly taken its toll.

Louie, back on staff at the dealership, shows Daniel and Amanda that a car is missing from the trade-in lot. A ’93 Dodge Caravan, to be exact. The LaRussos then assume Robby stole it to make a getaway. Daniel wants to find Robby himself, so the kid can turn himself in and make a better case for himself. He follows a GPS signal from the van, but comes up short when he finds the tracker on the side of a road.

Johnny heads to the hospital to visit Miguel. He steals a lab coat to gain access to the ICU, but when that’s a bust, he bashes his head on the paper towel dispenser drawing blood. (Guess a sensei will do anything to check in on an injured student.) “I failed you,” he admits to the comatose boy after finally sneaking in. “I’m so sorry… you just gotta keep fighting. Never give up.”

Daniel visits Cobra Kai looking for Johnny, but instead finds Kreese, who immediately starts taunting Daniel-san like the geriatric bully he is. Their exchange is short, but it certainly foreshadows what’s to come, as Kreese, the thorn in everyone’s side, tells Daniel they’ll eventually come to blows. “It’s inevitable,” he warns. “But this time, Johnny and I will finish it once and for all.”

Daniel then heads to Johnny’s apartment to ask for his help with finding Robby. “The whole reason these kids got into trouble is because of us,” Daniel tells Johnny. “The only way to end this is by working together, so… what do you say?” Before Johnny can answer, we cut to Miguel’s bedside. The fight in his head ends in sweet victory, and in the episode’s last seconds, his eyes pop open.

Will Daniel and Johnny be able to work together? What does Kreese have up his sleeve? Grade the premiere below, then hit the Comments with your thoughts!