The coronavirus is gone, but not forgotten, when The Good Doctor returns in the new year — and TVLine has your exclusive first look at the toll it’s taking on St. Bonaventure’s typically stoic chief of surgery.

When the ABC medical drama scrubs back in on Monday, Jan. 11, all focus will be on Dr. Audrey Lim (played by Christina Chang), who struggles to cope with the residual emotional trauma of COVID-19. Rather than deal with it, she attempts to ignore what she’s feeling and adopt a “business as usual” mentality, which is easier said than done.

“She’s trying to busy herself at the hospital, the idea being that that’s her safe place, ironically, when she’s in surgery,” Chang tells TVLine. “The first part of this episode is her just feeling like, ‘Look, I’m tired, I’m overrun, but everybody is. I have a lot on my plate, but everybody does. Every hospital, head of hospital and chief of surgery, everybody is feeling this. I am not unique, I am not special, I am holding it together.’ And then she slowly starts to… well, she just can’t do that.”

Claire is the first to recognize that something’s off with Lim, but the chief tries to play things strictly professional. “What’s so interesting about this dynamic is Lim needing to balance her friendship with Claire with being her boss,” Chang says. “There’s still a hierarchy there, so she’s probably less vulnerable with Claire, or at least she tries to be, than she would if they were peers.”

Lim also has to worry about Shaun, who declares he doesn’t want to teach the new residents following the loss of Asher’s patient. “She’s such an advocate for [Shaun], and where she normally would have a lot more patience for his being a beginner [in terms of supervising interns], her capacity for him is much more limited,” Chang says.

Check out exclusive photos from The Good Doctor‘s winter premiere above and below, then hit the comments with your hopes for the remainder of Season 4. 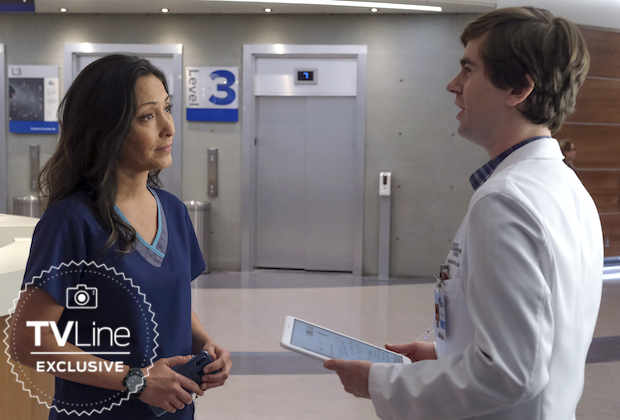