When ABC’s The Rookie reports back for duty next Sunday, Jan. 3 at 10/9c, Officer John Nolan will have Lucy Ricardo levels of ‘splaining to do.

When last we tuned into the procedural, Nolan (played by Nathan Fillion) and his T.O. Nyla Harper (Mekia Cox) had rounded up just enough damning, if not circumstantial, evidence against Detective Nick Armstrong (Harold Perrineau) to suggest the precinct legend was doing crime boss Serj Darien’s bidding. When Nolan ill-advisedly confronted Armstrong alone, gunfire was exchanged, with the latter winding up wounded. That is when Armstrong revealed that he had taken measures to frame Nolan as being the other dirty cop that the late Erin Cole was in cahoots with — and this shootout will only corroborate that scenario.

Nolan dashed home and frantically rummaged for the evidence that Armstrong had planted somewhere. But just as he uncovered a compartment built into the wall behind his headboard, sirens and lights arrived outside his doorstep, ready to make an arrest.

Though Officer Nolan is  a do-right if there ever was one, he now must convince his superiors of Armstrong’s illegal enterprise, while also fielding very hard questions about his and Harper’s tactics.

TVLine invited showrunner Alexi Hawley to tease what comes next, as well as the series’ plan to tackle a different kind of bad cop. 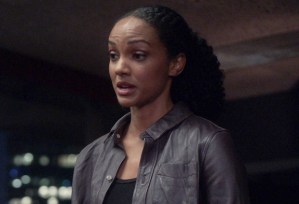 TVLINE | Coming out of the finale, I asked you how complicated could things possibly be for “Boy Scout” John Nolan, and you said you were determined to make it as complicated as can be. How did that turn out?
I think we made it pretty complicated. Obviously, there are some huge obstacles that he has to overcome, including the way that he and Harper did business at the end of last season. So, it’s not just the framing by Armstrong. It’s also the repercussions of the path that they chose to go down.

TVLINE | Will we see Harold and/or Annie Wersching in the premiere?
We will see more of both of them, actually — spoiler alert! Armstrong, obviously, was shot by Nolan at the end of the finale, and he will desperately be trying to spin sentiment against Nolan and Harper.  And then Annie comes in [as serial killer Rosalind Dyer], in an unexpected way. 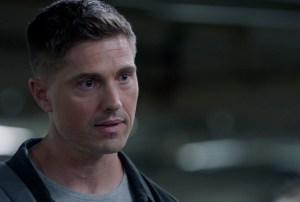 TVLINE | We actually last spoke not far into the pandemic, and you were just barely starting to figure what the show would need to look like moving forward. You were thinking that you might have to “slow-roll” these last 30 days for the rookies, to stretch them out. What did you end up deciding to do?
We have done that. Part of that was definitely driven by COVID; because of the protocols and because of the safety issues, I felt like, we, as a show, couldn’t put our cops in a roll call room, honestly, which is one of our main sets. So, basically we felt like, “Let’s just span the first nine or 10 episodes, in the hopes that once we get there, things will change,” and I think the outcome of that has been really good. It’s been nice to really dig into what those last 30 days of being a rookie is like, both the “senioritis” that comes along with it — Lucy (Melissa O’Neil) and Jackson (Titus Makin Jr.) basically are kind of done with having training officers and being students still — but also, from Tim (Eric Winter), the increase in stress. “Well, I only have you for 30 more days, so I’ve got to double-down on my training and put you through the wringer one last time,” stuff like that.

TVLINE | You’re saying that Tim might actually become even more intense during this final stretch?
Definitely. He feels like he only has a few weeks left with her, so he wants to make sure that she’s properly, fully trained before he sends her off out into the world.

TVLINE | Down the line at some point, will we meet new rookies?
We will. You know, it’s interesting — we can’t do the roll call room and are sort of punting it down the road, but because it’s so emblematic of being a rookie, in that you sit in the front row, the time where our rookies move back is going to be a thing. And obviously, when a new rookie or two shows up, for them to take over that spot will be a thing, too. I don’t want to hurt the show story-wise by not having those moments, but it’s a slow roll. 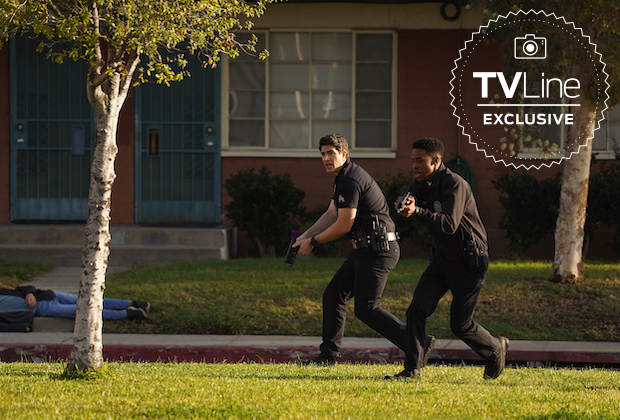 TVLINE | You gave me a teaser about the character that Brandon Routh (Legends of Tomorrow) is playing, Officer Doug Stanton. Is he your main entry point into the topic of policing issues? Or are you going to approach that in multiple ways?
He’s definitely one of the ways in, but we are approaching it in multiple ways. One of the things that we have, that most other police shows don’t, is that we’re a patrol show. Most other shows are investigative, and they deal with one crime a week, and because of that they really are a bit hamstrung in how they can talk about policing issues. But we do so many different things in every episode, so every call we roll in on, in three different patrol cars, can be anything. That allows the freedom to really come at the complicated issues in policing — which are too many to name — honestly, throughout the season.

Brandon’s character comes in as Jackson’s new training officer, since Lopez (Alyssa Diaz) is going to be getting promoted to detective, and he’s a problem. He’s definitely a cop who crosses the line in ways that are especially uncomfortable for Jackson, and that allows us to get into, “How do you remedy that?” We know how hard it is to discipline or get rid of cops when the unions are so strong, and because of the rules that are there to protect them. But you also have Jackson’s vulnerability as a rookie, who can be fired for anything, trying to navigate the waters of a training officer who he ultimately doesn’t respect. It’s very dynamic and very intense and, ultimately, it allows us to really push a lot of our characters in how they feel about things, in terms of Brandon’s character. 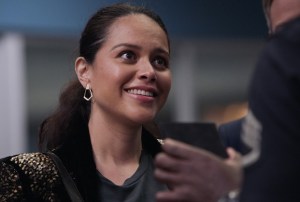 TVLINE | What sort of personal storylines are on tap this season?
We have a lot, actually. When we were breaking Season 3, obviously we felt a huge responsibility to honor all these conversations about policing and really dig in a lot of issues, but we also didn’t want to lose what made our show our show. We’re not doing anybody a service if we suddenly become American Crime or an afterschool special — anything that’s not The Rookie. Our show has a lot of fun in it, but at the same time we also do serious stuff, and we do romantic stuff, and so we were committed to remaining the same show, which I’m proud to say that we really have done. They kind of spoiled [one personal storyline] in one of the promos — I was hoping they wouldn’t — but you also have Lopez becoming a detective and suddenly ending up at the bottom of the food chain; that is going to be a runner for her this season. Also, we’re going to see Nolan’s mom this season, so I think that will be super exciting.

Everybody’s going to have personal stories, because I think that’s what people really love about the show. Like, they don’t really show up for the police work, as much as they show up because they care about these characters, and so yes, there will be romance. There’ll be all sorts of stuff.