Bachelorette viewers were left scratching their collective noggins Tuesday night when Tayshia Adams gave finalist and fan favorite Ivan Hall the boot due to their religious differences. The pair then alluded to “important” conversations they had regarding the issue of faith, with Hall himself acknowledging that he feared it would be a “roadblock” to their future together.

There was just one problem: The pair never discussed the topic of religion on camera, thereby creating a Titanic-sized plot hole for audiences.

Well, Hall is now bringing some clarity to the murky situation.

In an Instagram message to Bachelor alum Caila Quinn following Tuesday’s finale, Hall explained, “She only wants to date a Christian and I’m not religious.” He then noted, “I’m open to and have dated any religion.” 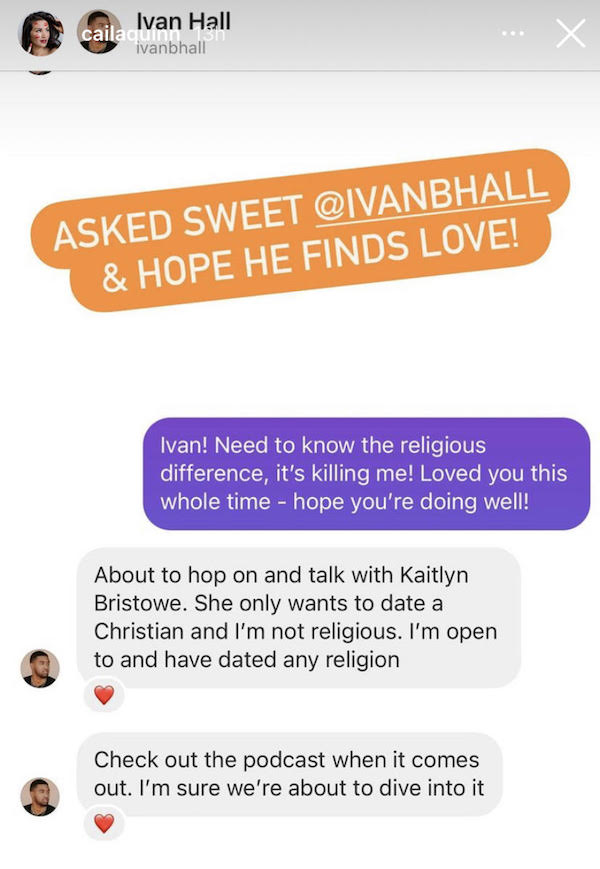 Adams and Hall’s breakup came during the opening minutes of Tuesday’s season ender (read our full recap here). “I wish I could say that there were a lot of red flags prior to this week, [but] it’s just that at the end of the day religion is an important part of my beliefs,” Adams vaguely explained to Hall before lowering the boom.

After his elimination, Hall revealed in his final confessional that he “knew in the back of my mind, this could be the bomb that explodes everything here. And it just happened.”

In the end, Adams gave the final rose to her now-fiance Zack Clark.