This season of The Bachelorette already saw one happy ending, when original star Clare left the show early with a proposal from Dale. Could Clare’s replacement Tayshia make it two for two?

Tuesday’s finale begins with Tayshia down to her final two men: Ivan and Zac… well, actually three men, now that Ben came back after last week’s dumping. Tayshia’s head is spinning after Ben’s surprise return: While she still has feelings for him, she also remembers she “sent him home for a reason.” She tells him she’s worried he’ll “run away” again if things get too hard — but she does invite him to tonight’s rose ceremony. Plus, they share a lingering kiss, which she instantly regrets. (“Why would I kiss him?!”) Ivan and Zac are not thrilled — understandably! — to see Ben at the rose ceremony… and it gets even worse for Ivan when Tayshia sets down the first rose to pull him aside. 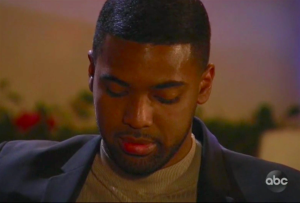 She tells Ivan they started out strong, but some things came up this week that “kind of posed concern” for her, referring to their differing views on religion. (Wait, when did that happen? Did we miss it?) He puts on a brave face as they hug goodbye, but he’s clearly crushed. “This is definitely going to sting for a while,” he admits on the ride home, but he also predicts that no one else is leaving the La Quinta resort happy, either: “She’s not going to pick anyone, I don’t think.” Ouch.

Now it’s time to meet the family: Tayshia’s mom, dad and brothers join her to grill the final two guys, and they meet Ben first. Her dad is “skeptical” about Ben since he didn’t tell Tayshia how he felt about her until he was already dumped, but Ben wins over her mom by telling her, “I’m in love with your daughter.” Her dad seems impressed, too, after some one-on-one time with Ben, and he warms up enough to “give him a chance.” (Plus, they took a fun scooter ride around the resort together.) Tayshia and Ben smooch some more, and she says she’s “falling in love with him all over again.” But you’re in love with Zac already, right? What is happening?!?

Next, it’s Zac’s turn, and he’s ready to tell her parents he wants to marry Tayshia. He makes a good first impression on them… but when Tayshia’s dad asks her to rate her readiness to marry Zac on a scale of 1 to 10, she only gives it “an 8.95.” (Sheesh, not even a 9?) Zac tells her mom and dad that he sees himself and Tayshia married and starting a family in the future, though, and they all share a New York-style pizza as Tayshia’s mom notes their obvious chemistry. Tayshia and Zac smooch it out, too, but she still seems torn between him and Ben. (It wouldn’t be a Bachelorette finale if she wasn’t, right?) 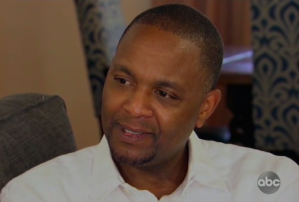 Tayshia’s dad senses her hesitation and, after the guys leave, he brings up the elephant in the room: her previous divorce. “I can’t let that happen this time,” he bluntly tells her, adding: “I don’t want you to be making the biggest mistake of your life.” Tayshia ends up crying about how “confused” she is and doing the usual Bachelor finale “I can’t do this!” routine. (It’s pretty much a prerequisite at this point.)

Zac picks up on her “trepidation” during their final date — which includes some dance lessons that start out clumsy before getting better — and she rambles on about all of her concerns, but he assures her, “I’m not going anywhere.” (They exchange more mutual “I love you”s, too, which we used to think was verboten for Bachelor/ettes before the final rose?) Ben gets ready for his final date — which allows the producers to squeeze in one last shirtless shot — but Tayshia’s mind is made up: “I know what my heart wants, and it’s not Ben.” She sits him down and breaks the bad news: “I just feel like my heart is with somebody else.” He tells her he’s happy for her, but confesses to the camera as he packs up: “I’m still in love with her. I don’t know what the f–k to do now.” Wow, Ben got dumped twice in two weeks. Is that a new Bachelor franchise record? 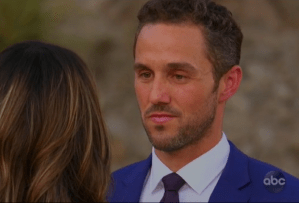 After Zac gets the required visit from Neil Lane, Tayshia heads out to a scenic desert locale — hey, they got off the La Quinta property! — and prepares for a proposal… though she still frets that it could be “too much, too soon.” She cries happy tears to Chris Harrison, gushing about how much she loves Zac, and then Zac arrives, pledging his undying loyalty. Tayshia tells him she wasn’t sure she’d get married again, but “you’ve truly woken up my heart… yes, it is real, and I feel it, too.” Though they’re both sobbing, he manages to get down on one knee — and she says “yes” before he can even pop the question! She goes through the formality of giving him the final rose, and they scream and yell in celebration together before jumping in a “Just Engaged” cardboard taxi. (No “After the Final Rose” special, though, so we’ll have to wait to hear how their “journey” is going.)

Alright, Bachelor Nation, it’s your turn: Vote for who Tayshia should’ve chosen in our poll, and then hit the comments below and share your post-season thoughts.