As Pennyworth opened Season 2, the good news was that Thomas Wayne survived being shot at the close of Season 1. But he may be wishing differently given lady friend Martha Kane’s reaction to the news that during his return Stateside, he got engaged.

That rockblock arrived on top of the couple’s argument about Thomas’ CIA staying neutral when it comes to the civil war led by Lord Harwood’s neo-fascist Raven Union. So all told, tough times ahead for those who one day (soon) shall conceive a future Batman.

Epix’s “Batman prequel” continues Season 2 this Sunday at 9/8c, with a two-part midseason finale following on Dec. 27. (The remaining episodes are penciled in for sometime in 2021.)

TVLine spoke with Emma Paetz about bringing Martha Kane to vibrant life as a modern woman in the ’60s, her Season 2 clashes, and at least one unexpected alliance. 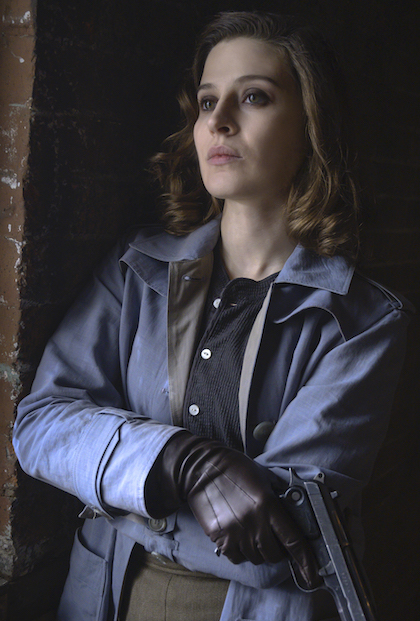 TVLINE | This is the first time you and I have had a chance to talk. All told, has this role turned out to be a lot more fun than you ever anticipated?
Yes, I think so! When I first signed on, I had read Episodes 1-2-3-4 of Season 1, so I didn’t know where Martha was going to go, but [EP] Bruno [Heller] has continued to bring her on unexpected path and journeys. In Season 2, as well, she is right in the middle of fighting, as part of the No Name League. In my career, I didn’t really see myself as someone who would get to take on those sorts of roles, so it has been pretty cool.

TVLINE |  Now remind me: Canonically, do we know that much about Martha Kane? Or did you all have a pretty clean slate to work with?
There is not a lot that is known about Martha, to be fair. She’s just really in the Batman universe placed as “his mother.” I think we know a little bit more about Thomas (Ben Aldridge) in canon, so there was a lot more room to play and maneuver with Martha. I think that for both Ben and I, we felt a lot of freedom with the characters, because there isn’t that much known about them personally.

TVLINE | One of the things I enjoyed about the back half of Season 1 and it continued into the Season 2 premiere is that at least one and maybe both of them are so awful at flirting. Was that fun to play?
[Laughs] In at least my experience in life, romantic situations are not really smooth sailing, and things are uncomfortable. With those two people, given how rocky their relationship started out, it just wouldn’t be realistic, at all, if once they moved into a more romantic realm it wasn’t slightly strange.

TVLINE | What’s fun about Martha is at the end of the day, she is almost one of the guys. We see that in the Season 2 premiere — she’s sitting there in trousers, with her legs crossed like a man, and the way that she colorfully summed up the extent of her and Thomas “relationship”…. I couldn’t believe she said what she did.
What I really relish about playing Martha is how much of a modern woman she is, in the 1960s. Also, she’s a modern American woman, which has a very differently stratified society compared to the UK, where she is in this series. The juxtaposition of that, and comparing her to the sort of women Thomas runs into in the circles he’s in…. It’s fun for Martha to play against that expectation. 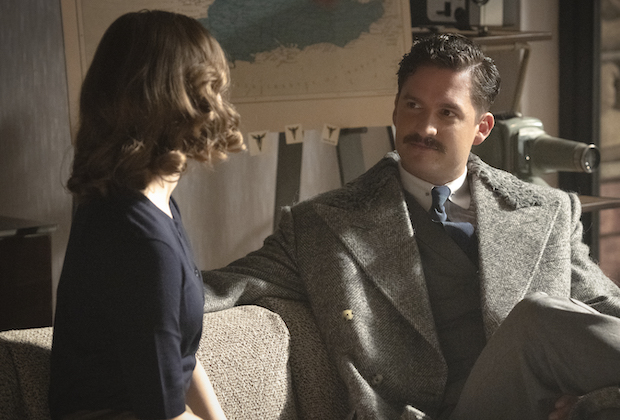 TVLINE | So, we just found out that Thomas is engaged to someone else — and yet we’ve been promised the Season 2 conception of a Bat-baby. How is that going to work itself out? Because Martha seemed pretty cheesed off.
I think that nothing ever runs that smoothly for Martha and Thomas in their dealings with each other — and Season 2 continues on along that path.

TVLINE | As an actress, what cool things have you gotten to do in Season 2?
There’s a lot of action-type stuff, so I had to do some gun training, which I didn’t think I would ever have to do in my career — and that was pretty wild. I know a lot of the guys last season went and did a much more prolonged version of this mini-training I did, but…. I wasn’t sure how I would take to it, and the day we got to shooting some of those scenes I was really nervous. But then I wanted to do another take, and another take, because when you’re doing it it’s really invogatting.

When you’re acting, you’re always trying to forget what’s about to happen and kind of just take yourself out of your head and your body a bit. So to be firing a semiautomatic weapon, even though it has blanks in it, there’s a literal explosion happening. It’s a very good way to clean the slate of your brain and get into something. I really enjoyed doing that.

TVLINE | Who is Martha going to lock horns with in Season 2?
Who doesn’t she? [Laughs] Martha is still striving for what she sees as right as an individual and as a part of this greater cause, but you see Martha teamed up with different people more than you did last season. She’s alongside other people a bit more.

TVLINE | Because Bet Sykes (Paloma Fath) seems to have a new bee in her bonnet. I’d like to see the two of them clash.
Yeah! Yeah. I don’t know, you’ll have to see…. 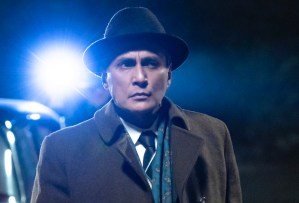 TVLINE | Any friends for Martha, beyond Thomas?
Throughout the season you see her get a lot closer to [Deputy Inspector] Aziz (Ramon Tikaram), and that was something I really enjoyed. It was really unexpected, actually — they’ve got quite a lovely relationship, and it’s nice to see Martha interact with someone she genuinely admires and looks up to, and who doesn’t have some level of disdain for her — which is very rare for her to encounter in a person!

Someone else that Martha has unexpectedly got on with is [Thomas’ sister] Patricia Wayne (Salóme Gunnarsdóttir). They have a united thing with their “knocking Thomas off of his pedestal,” and you get to see more of them doing that.

TVLINE | Any other last, general ease about what’s coming up?
Hmmm…. Well, Martha might be involved in some fights that involve nudity. And not necessarily from her!