The following contains spoilers from the Season 2 finale of Disney+’s The Mandalorian.

The Mandalorian‘s Season 2 finale left our nerdy, Star Wars-loving jaws on the floor, for sure, but it also left us with questions. First and foremost, of course, is:

1 | What exactly is the “Book of Boba Fett” story that was teased in the post-credits scene?

Some have assumed (and some have reported without confirmation) that it is a standalone spinoff that Disney chose not to announce along with everything else in the galaxy during its Investors Day presentation on Dec. 10. And yet, its “December 2021” premiere month aligns with the same “December 2021” arrival of The Mandalorian Season 3. Would Disney+ trot out two Star Wars series in the same month? Or is Boba Fett taking over as the central figure of The Mandalorian (though he’s not a Mandalorian per se), now that Din Djarin’s quest involving the Child is over?

Disney+ is 100-percent mum on “The Book of Boba Fett,” which is… curious… given what a sharing mood the streamer was  in on Investor Day. 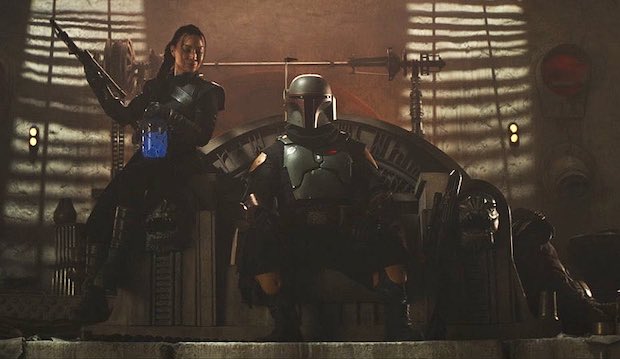 While we await word on Fett’s future, here are some other questions — some serious, some less so — that popped into my head as the Season 2 finale unfurled:

2 | Have Mandalorian viewers seen the last of Grogu, who master Luke Skywalker took away to train in the actual finale’s final sequence? And if Boba Fett is the focus of Season 3, have we seen the last of Pedro Pascal as Din?

3 | Does this mean we will never find out how exactly Grogu came to be abandoned in that building on Arvala-7? Sure, Ahsoka Tano relayed some of what he had been through, but…  seems like a long time for him to be stranded there in his pram.

4 | Not to paint Imperial officers with a broad brush, but… wouldn’t the comms officer have found it curious that the Lambda shuttle pilot was suddenly female? 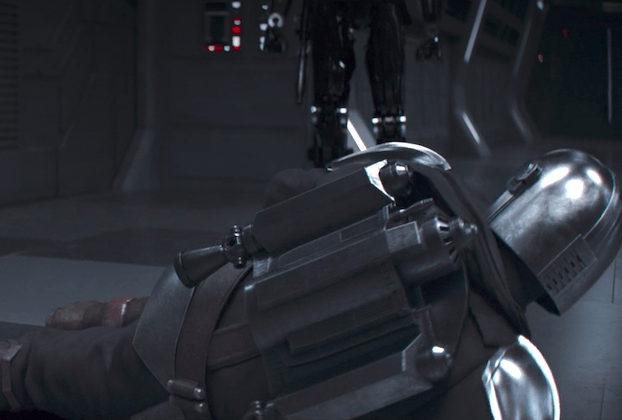 5 | Where did Mando’s Beskar spear materialize from during this fight scene? (Here is a screen shot from right before he produced it to decapitate the Dark Trooper.) Is it, like, super-retractable? Fits into a shirt pocket? UPDATE: Answered (by Toby, Karen, Chet and others)! The spear was on the floor behind him, as he fired off the whistling birds as a distraction.

6 | How did the Dark Troopers, upon re-boarding the cruiser, know to make a beeline for the bridge? Or is their default setting “Protect Moff Gideon,” and he has, like, a GPS tracker on his person?

7 | Did Star Wars vet Mark Hamill, whose voice is a bit gruffer these days, loop CGI Luke’s dialogue? Was it assembled from past movie clips? Or was it a soundalike? (“WITH MARK HAMILL” was listed among cast in the closing credits, but that could be a rights-to-likeness thing.) 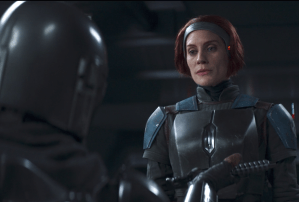 8 | Did Mando unwittingly dash Bo-Katan’s hopes of wielding the Darksaber, to reclaim Mandalore? Or are they due for an off-screen skirmish so that she can earn it back through combat, à la the end of Rocky III? [“Ding, ding.”]

9 | Speaking of Rocky movies, who’d have thought Carl Weathers would get such short shrift in Season 2, appearing as Greef Carga in just one episode (and directing another)?

10 | Given all that was learned during these past few episodes, what did Giancarlo Esposito, who plays Moff Gideon, mean when he said that “in Season 3 and Season 4… you’re really gonna start to get answers“?

11 | How is Bib Fortuna alive? How did he not die with Jabba and his other minions in Return of the Jedi?

12 | Will “The Book of Boba Fett” — whatever it is  — pick up with him and Fennec Shand laying claim to the late Jabba the Hutt’s palace on Tatooine? Or is the “book” the story of how Boba survived the Sarlacc pit, told via flashbacks, and how he got to where we first saw him this season? Or will it be a mix of the two?

What questions do you have about The Mandalorian‘s Season 2 finale, and beyond?