Survivor and Big Brother aren’t the only competition series with masterful, money-making alliances.

On Wednesday’s season finale of The Amazing Race (read our full recap here), boyfriends Will and James rode their Final 3 alliance to the very end, jumping off a bridge, inhaling delicious pastries and hustling through bustling New Orleans to secure that hefty $1 million check and be crowned the winners of Season 32. But little did James know that winning the moolah wouldn’t be the only life-changing event waiting for him at the finish line. (They got engaged!)

Here, the now-fiancés chat with TVLine about their strategy going into the season, keeping their win a secret and what they really thought about alliance-mate DeAngelo’s harsh final words.

TVLINE | Congratulations on winning and on your engagement! James, what were you more surprised about: winning the Race, or Will’s proposal?
JAMES | Definitely Will proposing! At that point, I was completely caught off-guard. It was a perfect moment.

TVLINE | You guys filmed this season two years ago. How hard was it to sit on this secret until the season aired?
WILL | It was the best-kept secret. We were super excited for our families and friends to see how well we did and what happened with the proposal. But keeping it a secret was very hard, because we really wanted to tell people. Telling people we were getting married in New Orleans didn’t make a whole lot of sense, so we kind of had to tell some lies to make it make sense!
JAMES | As hard as it was to keep those secrets, we had each other through that time and we got closer with our cast, so it was a blessing in disguise.

TVLINE | Was joining an alliance one of your goals going into the race, or something that just naturally happened?
WILL | I think for us, Season 21 stood out a lot because of the Twinnies, the Chippendales, and Trey and Lexi, and them having a three-team alliance and almost making it to the Top 3. That strategy obviously worked for them. Going into it, we really wanted to try to form an alliance — granted we didn’t know if it would work or if we would be able to — but I think after the first three legs were all equalizers, we felt we really needed to work those social relationships. There was really no benefit to where you placed every leg, so we had to do what we could to be successful.
JAMES | Especially when there are Yields in the mix. We wanted to position ourselves where no one would ever consider Yielding or U-Turning us. Like Will said, the ultimate goal was to form an alliance or pact with two teams who had similar approaches to the race — to compete hard and have fun while doing it — and we always felt that with Maddison and Riley, and Hung and Chee very early on. 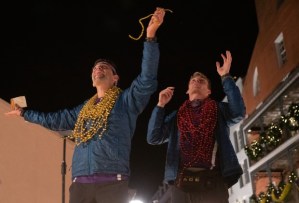 TVLINE | What were your thoughts on DeAngelo’s harsh comments post-elimination? He seemed pretty ungrateful for the experience.
JAMES | He actually called me that night the episode aired. As a superfan, I’m trying to be very careful with how I feel. Not everyone’s like me, not everyone loves and appreciates the show for what it is, and I get that. It was DeAngelo’s lived experience and I can’t fault him for that. Although it was a little upsetting, because I do think the Race is an experience in and of itself, no matter how you look at it. It’s really all about perspective.

TVLINE | In the edit, you guys seemed to have a good lead in the final leg. How much of a lead did you actually have, and how confident were you that you were going to win?
WILL | I think we knew we were going to win when James jumped off the bridge. That moment where I’m saying, “This is for a million dollars!” was literal, because we knew if James did that, we were going to have a massive lead. Going to the finish line, we hadn’t seen a team since the beignets, and honestly, I think the lead at the end was between an hour and a half and two hours.

TVLINE | What was each of your favorite countries to visit, and why?
JAMES | Oh my gosh, you’re going to do that to us? Just one!? It’s so hard to pick! The one thing that really sticks out to me was the Amazon, because that’s a spot I don’t think we considered going to. The opportunity to do the cultural tasks, and the riverboat with the teams where we all got to hang out and enjoy that company with each other, was a highlight.
WILL | Kazakhstan was incredible. It’s not a country we’d normally be able to visit. The fact that we were able to go and experience the beautiful culture and warm nature of the people, and do really cool stuff with the stunt scene, and then helping decorate the yurt in the Nomadic village… that country will always hold a special place in our hearts. You can’t even pay for those experiences! It was just a really wonderful leg.

TVLINE | Anything you wish was shown on TV that didn’t make the episodes?
WILL | Before every single leg, we would make stops at hotels or internet cafés and do extensive research on where we were going. We’d have in-depth conversations with our taxi drivers to get more knowledge. We did a lot of work in between traveling to destinations to make sure we felt confident. It helps you feel calm and comfortable going into a leg. I think we felt that for almost the entire race, just feeling like, “OK, we know a little bit, we can do this.”

TVLINE | So if you get the call to go back, would do it all again?
WILL | One hundred percent!
JAMES | In a heartbeat! Without question! We were ready to keep racing the moment we got to the finish line! We could’ve gone another two, three weeks, a month, whatever!
WILL | A million dollars can’t even buy you The Amazing Race. It’s something you would never be able to do, and regardless of how stressful it is, it’s such a rewarding experience to meet people from all over the U.S. James and I would never have met Gary and DeAngelo! NFL football players are definitely not in our social circles…
JAMES | But now they are!
WILL | … Hung and Chee, or the beards, or even Haley and Kaylynn, Leo and Alana… for all these people from different walks of life to come together, it’s such a beautiful part of the show. Being able to do it again and see different cultures and other places, you couldn’t say no.
JAMES | If you can do a once in a lifetime moment twice, you’d be crazy not to say yes.