Maggie got her crumpet buttered in last week’s A Million Little Things, but it’s a whole different pastry at the center of this week’s hour.

And yes, there’s PTSD, depression and hidden drug use aplenty in the rest of the episode, but let’s just start with the lighthearted, sexy stuff, OK?

Read on for the highlights of “The Talk.”

JAMIE KEEPS A STIFF… UPPER LIP | After a quick call in which Maggie tells Regina all about her very pleasant evening of “B+” sex with her roommate, Jamie, she comes out of her bedroom to see that he’s left her coffee and a danish on the kitchen table. This is dismaying, given that Mags has just finished vowing to Gina that all she wants is some no-strings nookie while she’s abroad. (Side note: Gina’s retort — “You do not flunk a B+. You tutor it.” — is perfect.)

Later that night, Maggie is attempting to let Jamie down easy when he surprises her: He’d bought the danish and coffee for himself, he says, and when he saw that she assumed he’d done so for her, he started to freak out that she wanted more than he was ready to give. I’m not sure I buy this, but he uses his failed first marriage as proof that he’s not looking to settle down with anyone right now, and Maggie relaxes a bit. 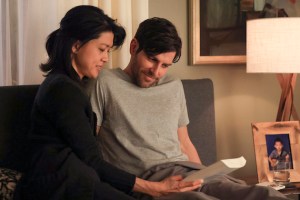 BIRDS-AND-BEES TIME | While Eddie is surreptitiously swapping his prescription pain meds for aspirin (never a good sign), Katherine comes into the kitchen and wonders if he has something to tell her. Eddie freezes… but she’s talking about the results of a “big boobs” search on her iPad. When Eddie promises that he wasn’t the culprit, a look at the history reveals that Theo’s become aware of the female form.

So they sit their son down and give him The Talk. But the whole awkward exchange brings up even more questions for them than it does for him, given that Eddie and Katherine haven’t had sex since his accident. Eventually, he confides in her that he doesn’t think she could possibly want him anymore, given how different he and his body are now.

“My body is broken, and I don’t know how to use it and I’m probably a little embarrassed to try to figure it out with you,” he says, close to tears. But she counters that they learned how to be intimate again after his infidelity, and they’ll do it again. (Side note: Is that the saddest pep talk ever, or what? Somehow, Grace Park makes it sound loving and gentle.) Anyway, it seems to work, because when Katherine kisses Eddie, he kisses her back. 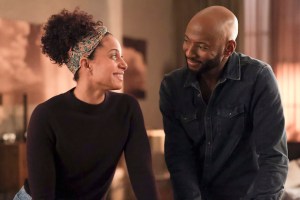 SHANICE’S CONFESSION | Shanice spends a day shadowing Regina so she can play her in Rome’s film. But when they start to talk about the Howards’ relationship, Gina gets a little too candid about Rome’s depression and her worries about him. Shanice leaves abruptly, then asks Rome for a meeting; shaken by watching the casting process for the actor who plays Jon, he shows up thinking that she got scared and is going to pull out of the film.

But the truth is actually the opposite: She reveals that when she famously walked away for a gajillion-dollar movie in the recent past, it was because she was hospitalized for depression. “You may want me to play Regina, but in real life, I’m Rome,” she says. And when he wonders whether he should even be making a film that sorta/kinda capitalizes on his friend’s suicide, she counters that he must do so in order for people to feel less alone. “This has to be told,” she tells him, “especially for us” 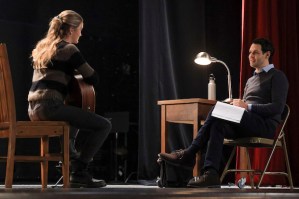 FAKE FATHER KNOWS BEST | Standing in for Delilah (while she’s in France), Gary accompanies Sophie to her audition for a tough music program that could help her gain admittance to Massachusetts Music Institute, her new dream school. She does well, but the program’s director, Peter (played by Bones alum/Zoey’s Extraordinary Playlist‘s Andrew Leeds), tells her she lacks passion and is generally kind of a schmuck to her.

Gary storms onto the stage after, admonishing Peter not for passing on Sophie but for his cold manner. “You’re an adult, and there’s a nicer way to do what you just did,” he says. Sophie is mad at Gary for interfering, but Darcy assures him it’ll pass. And after Sophie gives a very passionate street performance outside the theater where Peter was auditioning students, he tells her there’s still no room for her in his program — but if she’s willing to work hard, he’ll take her on as a private student. She’s psyched, and Gary is forgiven.

ECHOES OF WAR | Darcy is having nightmares about her time in Iraq, but when she wakes, yelling, she insists to Gary that she doesn’t want to talk about it. Her PTSD becomes even more apparent later in the episode, when Danny innocently jumps out from behind a corner and yells, “Boo!,” thinking she’s Gary. Darcy loses her stuff, yelling at him, and then instantly feels terrible. Still, though, she doesn’t want to confide in Gary about what she’s going through. So he sits down on the stairs in the Dixons’ home and calls Maggie in the middle of the night in Oxford.