Tuesday’s Season 19 finale of The Voice marked a night of firsts: Not only did coach Gwen Stefani finally score a victory, but she did so with Carter Rubin, the youngest-ever contestant to win NBC’s long-running sing-off. Here, to share with TVLine his thoughts on everything from socially-distanced congratulations to the duet he wished he’d gotten to do is the 15-year-old wunderkind himself.

TVLINE | Carter, congratulations on your win!
Thank you! I’m still in shock. I’m not really comprehending it.

TVLINE | Did you get any sleep at all Tuesday?
Like two, three hours. Really not that much. I couldn’t — my phone was exploding. It was just insane.

TVLINE | Viewers were really moved by your close relationship with your brother Jack, who has autism. What was his reaction to your victory?
I called him right after [the show ended], and he was so happy, of course. He was like, “Oh my God, you won The Voice!” And I was like, “We won The Voice!” Then he was, “Oh my God, we won The Voice!” He was screaming. It was so funny. He’s been just the best through this entire experience. 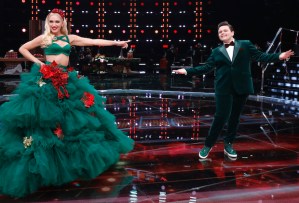 TVLINE | You looked understandably nervous waiting to hear whether you or Jim Ranger had won. Were you actually trying not to throw up?
Well, I was definitely nervous, but I just kind of went in with the mindset like, “OK, whatever happens happens.” And before the winner was announced, I was talking to Gwen from a distance, and she was like, “Just remember, this is a moment in your life. And no matter what happens, you have such a big future ahead of you.” So I already felt like a winner. And then Carson Daly called my name, and I just collapsed. I couldn’t believe it.

TVLINE | How difficult was it not to be able to hug your coach after you won?
It was so hard. We had to just air hug. But even if we couldn’t hug, we built such a close bond throughout this entire experience. I could not be more grateful for her.

TVLINE | Were you worried during the competition that your age would work against you? The show’s never had a winner quite as young as you.
You know, I think that age ain’t nothing but a number. I was just lucky to be surrounded by artists who were older than me, because they are such incredible role models and always gave me amazing pep talks and advice. 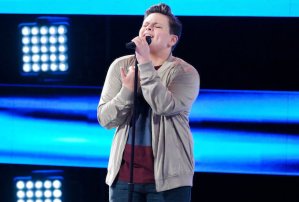 TVLINE | I’m not a crier, but I actually got misty when you sang “The Rainbow Connection.” Your vocal was so beautiful.
Aw, I really appreciate that. That was definitely my favorite performance. Gwen was crying, too. I think I just kind of let my heart come out on that performance. I wanted to make it very pure and raw and intimate.

TVLINE | I was actually hoping you’d do it again in the finale but with Kermit the Frog.
Yeah, I was definitely disappointed [that that didn’t happen], but I don’t know, maybe in the future, I’ll get to meet him.

TVLINE | I feel like there’s a part in the next Muppet movie with your name written all over it.
[Laughs] Yeah — me, him and Miss Piggy!

TVLINE | You mentioned on the show that it was sometimes challenging being a creative kid, an expressive one. Anything you’d like to say to the kids out there who might also be having trouble marching to the beat of their own drummer?
To all those kids, I just want to say that you don’t want to look back in a few years and have to say to yourself, “Wow, I wish I hadn’t let my fears get the best of me.” You don’t have to wait to go follow your dreams. Just go, live now, because you’re not going to be a teenager forever. So just live it up and be yourself. That’s what I would say to those people. Do whatever makes you happy.