The Season 19 finale of The Voice shouldn’t have been suspenseful. Like, at all. Based on your enthusiastic support of Team Gwen Stefani’s junior achiever Carter Rubin in the polls that have followed our recaps, he had the victory in the bag. A nice one, even, with tissue paper and a bow.

But, as we know all too well, the results of TVLine polls don’t necessarily reflect the preferences of the NBC sing-off’s audience as a whole. We also couldn’t underestimate The Blake Shelton Effect — by which a contestant leapfrogs to the front of the pack in large part just because of his coach’s massive popularity.

So, what actually happened? Did viewers decide that the kid was (more than) all right? Did Blake’s cowboys split the country vote, setting the stage for Team Kelly Clarkson’s DeSz or Team John Legend’s John Holiday to pull off an upset? Before we found out, of course, we had a whole lotta performances to get through. They went something like this… 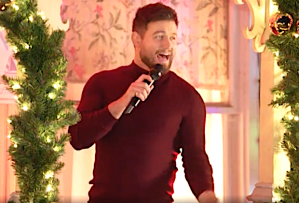 The Top 20, “Rockin’ Around the Christmas Tree” | Super-cute as it was, this prerecorded segment mostly made me miss contestants that had already been eliminated (Ben Allen, Sid Kingsley) or kicked out (Ryan Gallagher) and reminded me how good Cami Clune sounded when the producers had time to sweeten her vocals.

Nelly featuring Florida Georgia Line’s Tyler Hubbard, “Lil Bit” | Before this performance, I would’ve said that I wasn’t nearly cool or with-it enough to like Nelly. But this was as catchy as hell and as tight as the belt that the superstar didn’t use to hold up his pants.

Lewis Capaldi, “Before You Go” | Well, damn. This guy’s like a flawless singer, isn’t he? Makes ya go back and appreciate the excellence of Carter Rubin’s Blind Audition to this heart-tugger, too, doesn’t it? (If you’re so inclined, you can rewatch it below.) Powerful, precise, magnificent.

24KGoldn featuring Iann Dior, “Mood” | Hmm… so this is a big hit, huh? It’s catchy, I guess, but rather monotonous. Like listening to a metronome do its best Milli Vanilli impression. Even the shaky camera effects couldn’t bring it to life. 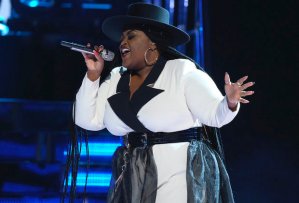 Duet With Coach
DeSz and Kelly Clarkson, “I’m Every Woman” — DeSz’s grade: A | Ooo… from the first note, I thought, “Why didn’t DeSz sing this one during the competition?” It fit her as snugly as the velvet gloves that she wore during her performance. At one point, her wailing even reached the heights of Martha Wash in her Black Box days.

Lauren Daigle, “You Say” | Wow, Lauren’s rendition of her Christian chart-topper was so beautiful and so powerful, it was like a little slice of heaven inserted directly into your ears. Season 16’s Maelyn Jarmon would slay this song.

Jason Derulo, “Take You Dancing/Savage Love” | Whoa. He has quite a green-screen setup at his house. That, or whoa, he’s definitely going to win his neighborhood’s Christmas-lights-display contest. But how did he safely perform in the middle of that crowd of dancers? Were they CGI? Are they a pod? In any case, this mini-medley was hookier than anything you’ll hang your coat from. Fun in the extreme. 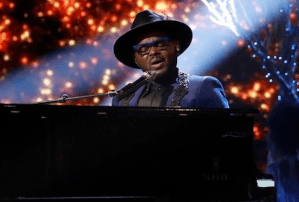 Duet With Coach
John Holiday and John Legend, “Bridge Over Troubled Water” — Holiday’s grade: B | Before their performance, Coach Legend described it as a “holiday hug.” Rather a melancholy one, though. It was interesting hearing the Johns sing together, too, because it underscored a problem with Holiday I’d never been able to pinpoint before: Whereas Legend sounded altogether natural, Holiday came off affected, like he was always trying really hard to show off. Great singer, but forced.

Dan + Shay, “Take Me Home for Christmas” | OK, this was harmonious and delightful and all, and clued me in to the fact that Shay was a dude, but mostly I was preoccupied by… well, I couldn’t tell ya which one it was, but whichever of them had such lush metalhead curls, he looked liked he’d do a perfectly competent Quiet Riot cover.

Duet With Coach
Ian Flanigan and Blake Shelton, “Mamas Don’t Let Your Babies Grow Up to Be Cowboys” — Ian’s grade: B- | Before this performance, Blake joked that Ian’s rumble of a voice was going to make him feel like less of a man. And boy, Ian did rumble like a storm rolling in. But overall, the number was kinda one-note — not unpleasant at all but not terribly memorable and definitely not playing to the contestant’s strengths. 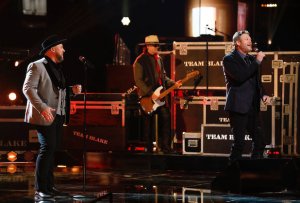 Duet With Coach
Jim Ranger and Blake Shelton, “Streets of Bakersfield” — Jim’s grade: C | Hand on the remote, when this song started, I would’ve sworn Jim and his coach were doing “Grandma Got Run Over by a Reindeer.” It’s a kooky song, no? Anyway, as with Ian’s duet, it didn’t play to Jim’s strengths. It was fun and let him show off his personality but not either the racous or tender qualities that had made him such a standout.

JP Saxe featuring Julia Michaels, “If the World Was Ending” | JP, it seems, is a master of talk-singing; he made it seem super easy (and emotional at the same time), whereas when Julia joined him, her vocal seemed breathier, huffier. Regardless, they sounded lovely together — classy and understated. 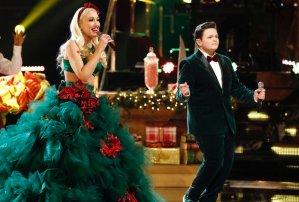 Duet With Coach
Carter Rubin and Gwen Stefani, “You Make It Feel Like Christmas” — Carter’s grade: A+ | Adorably, Carter teamed up with his coach on her duet with her boo. And I hate to fall for cutesy stuff, but c’mon, I’m only human. This was freakin’ precious. And on top of that, Carter sounded like the standout in every Christmas choir you’ve ever heard. Delightful.

Keith Urban and Pink, “One Too Many” | Dang, you could see why they put these two on last. Few and far between are the performers who could come close to their level of perfection. And the song was so gorgeous, it made me wish iTunes was still a thing so that I could download it. (Also worth noting: Pink on a projector is still more compelling than most artists in person.)

So, are you satisfied with the results? What did you think of the finale — and the season overall? Vote in the polls below, then hit the comments.