The Masked Singer Season 4 finale in a nutshell? To paraphrase the great Craig Robinson: All my life, I felt the heat of the sun. I never saw the face of the sun until now.”

Yep, Sun bested her competition in Wednesday’s two-hour episode, taking home the Golden Mask trophy and bragging rights. Mushroom came in second, and Crocodile placed third. Of course we’re going to tell you who was whom… but first, a quick recap of the performances! 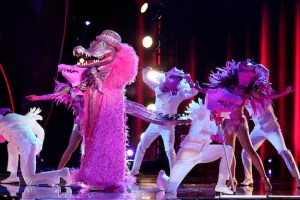 CROCODILE | “Growing up, my family was dirt-poor,” Croc told us in his clue package, adding that he had to mow lawns to save money for his first alum, Journey’s Frontiers. He sang a Journey song, “Open Arms,” and his performance sounded like it was from a musical based on the album, if that makes any sense? (This is not a criticism. I love musicals!) I’m not sure I would’ve switched into that scream-y falsetto near the end, though. (That was a criticism.) This week’s schtick is that the singers give the judges gifts/clues: Crocodile’s was an angel for Jenny McCarthy Wahlberg. (My guess: Backstreet Boy Nick Carter.) 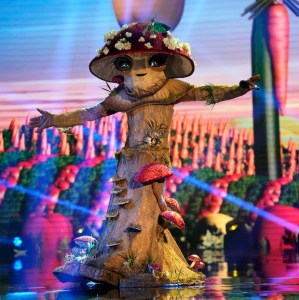 MUSHROOM | Mushroom informed us that his daughter — “my little ‘shroom” — was the inspiration for everything he did on the Masked stage. So he performed her favorite song, “I Wish” by Stevie Wonder, and it was a boppy, smoothly sung good time. Other clues included: “While most of you have shopped to my music in the supermarket and heard me on the radio, not a lot of you know me by name,” and a carton of mushroom cookie dough ice cream for Nicole Scherzinger. (My guess: “I Need a Dollar” singer Aloe Blacc.) 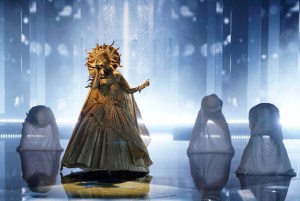 SUN | Sun referred to herself as a one-time “pop princess” in her set-up video, noting that she’s “been in the industry a really long time, since I was a kid.” Then she blew the doors off the place with her rendition of Brandi Carlile’s “The Story” (though it physically hurt me to have it truncated like that) and gave Robin Thicke mistletoe. (My guess: “Can’t Fight the Moonlight” singer LeAnn Rimes.)

OH, AND ALSO | Among the judges, Jenny won the Golden Ear trophy.

Now it’s your turn. What did you think about the finale and the season on the whole? Grade ’em both via the polls below, then hit the comments to expand upon your thoughts!