In Thursday’s fraught Grey’s Anatomy, things were looking up for Meredith but way down for Tom, who was ambulanced to Grey Sloan resembling nothing so much as the textbook definition of “worse for wear.” Having already lost Teddy and his chief-of-chiefs gig, was Koracick about to lose his very life? Read on and find out.

‘ARE YOU GOING TO WORK… AT THE REGULAR TIME… ?’ | As “Fight the Power” began, Teddy and DeLuca celebrated the fact that Meredith’s condition was improving, Levi discovered how hard hit by the pandemic Jo was (to the point that she was “paralyzed by excitement” in bed — ha), Bailey connected with Ben and her father over FaceTime, and Jackson asked for Richard’s help getting Catherine to properly wear her mask. (Proximity to one’s face doesn’t count as actually wearing it on one’s face, damn it!) Shortly, we learned that Luna’s mom Val required continued care, and — insert chest pains here — Tom was brought in, as advertised, in dire straits. He was so bad off, in fact, that he didn’t recognize Teddy or Owen, and seemed to think that his son was still alive.

Soon, Bailey’s mood took a sharp downturn when she learned that Silver Villas assisted-living home — where her parents were, hello! — was suffering from a COVID surge. She beseeched Ben to get her folks outta there asap, but it was already too late. By the time she got her husband’s voicemail messages, he’d arrived back at Grey Sloan with her symptomatic mother. While Maggie pondered what meds they could prescribe Bailey’s mom to calm her, Bailey herself soothed her by singing “My Girl.” Yikes, this episode was gonna be a heartbreaker, ya could just tell. In no time, Bailey was forced to call her father to inform him that the love of his life wouldn’t make it through the night. Again, yikes. Chest pains. All of it. 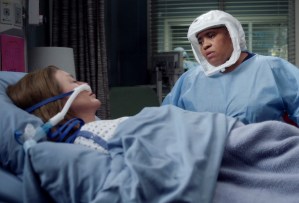 ‘TREE-HITTING IS FROWNED UPON’ | Looking for a way to deal with her feelings, Bailey confided in an unconscious Meredith that her mom had once advised her to deal with her emotions by hitting a tree — her own tree. “My mother has Alzheimer’s,” Miranda went on. “I never told you” or Richard, because she hadn’t wanted to upset them. But unless you’ve been through it, “no one understands that you are watching your own mother die… twice.” Later, Bailey rang her father on Zoom so that he could see his wife. “She drifts in and out, Dad,” Bailey had to tell him. He wanted desperately to be there, but of course, that wasn’t safe. Through it all, Miranda tried to maintain a stiff upper lip. “Mom, if you’re ready to go, it’s OK,” she said. “We love you, but we don’t want you to suffer.” In response, her mom said, “Not ready… I wanna go home.”

Later, Bailey told Maggie that her mom had informed her that she wasn’t ready to go. Yet she also feared that her mom hadn’t really known what she was saying. And she was furious. She didn’t want her mother to be a statistic. “All of this is confusing… and awful,” Maggie offered. Bailey didn’t know what to think in the end. She’d been sure that Mom wouldn’t want to live with Alzheimer’s, but now… gah! She couldn’t be positive. Maggie’s opinion? Let her go. Maggie might have kept fighting to keep her own mom alive, had Diane not given her such clarity in the end. Sadly, Bailey felt that she had to beat herself up for bringing her parents to Seattle. Her mother “was exposed at the place I set up for them!” Maggie tried to insist that Bailey couldn’t feel guilty about it, but… easier said than done. “She just needs me to be a good daughter,” cried Miranda, “and I don’t know if I know how to do that.” 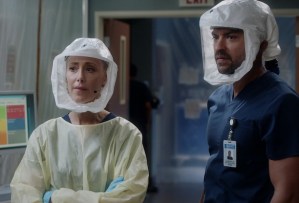 ‘CAN YOU HOLD THE PHONE CLOSE ENOUGH TO SMELL HER HEAD?’ | When Jo reported to Val that she had a pseudo-aneurysm, the patient didn’t take it well. “I’ve known my baby’s name” for eight years, she said. “And now that I finally have the chance [to be a mom]… I don’t know if it will ever be real,” or if she’d only be able to see her child over FaceTime. Post-op, as Jo pondered the possibility of Val needing a liver transplant, new resident (or is he an intern?) Kahn, an MVP in his home country, marveled at the former Mrs. Karev’s excellence. Later, Jo was somehow recruited to deliver a baby. (And you thought your day was something!) That evening, Jo shared her experience with Levi. “It was the happiest thing I had ever seen,” she said, adding that hmm, Carina seemed to always be in a good mood. What if Jo changed careers? What if she gave up surgery and became an OB? “Eat and then sleep before you… ,” said Levi. “Oh my God, I sound like my mother.” Regardless, since tomorrow isn’t promised, Jo wanted to choose the joyful option. 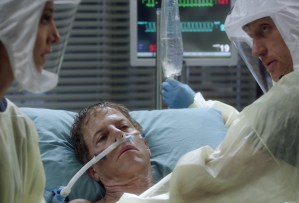 BACK FROM THE BRINK | Consulting with Teddy on Tom’s case via Zoom, Amelia decided that she had to go in to Grey Sloan; he was having neurological complications — he needed her. “We’ll be fine here,” Link said. “Go, save your friend.” Unnecessarily, Amelia mentioned that not only had Koracick saved her brain, he had been her first sex after Owen. Wait, what? Link said. TMI, Amelia. TMI. At Grey Sloan, Amelia suggested that Tom’s delirium was a side effect of COVID, not especially neuro. “I hate everything,” Jackson said when he was filled in on Koracick’s condition. In a moment alone with Teddy, Amelia admitted that she’d heard what had gone down with Tom and Owen, and though she had feelings about it, hey, she’d heard — and arguably done — worse. Later, Amelia told Teddy that Koracick’s numbers were holding. Though he was unconscious, Altman expressed to him her wish to save their friendship. “If you want to have nothing to do with me, you’re going to have to get all better and tell me yourself.” At that, he awakened. It appeared that he was gonna be fine — he was even in the mood for a sponge bath. After all those yikes-es, whew!

As the hour drew to a close, Jackson marveled to Richard that half of their COVID patients were Black or brown. “Systemic racism is the preexisting condition — existing while Black,” said Avery. He didn’t have to worry about Catherine, at least; Richard had taken care of that, Webber said — in some kind of sexual way. Shortly, he encouraged Bailey to go into her mother’s room and be there for her. “I’m scared,” she admitted. “We’ll do it together,” he replied. So in they went, so that Miranda could stroke her mom’s hair with a gloved hand and sing her one last song as she slipped away. So, what did you think of “Fight the Power”? How hard did you cry over Bailey’s mom’s death? Were you relieved Tom pulled through? Hit the comments with your observations, reactions, reviews — the works.