And that thing? A little social dancing.

Granted, the tepid two-step action involves Legarski’s neglected wife Merilee and Ronald, of all people. (Not that Rick knows that last part, at least not yet.) But the mere idea of Merilee going out for a social evening and interacting with men who are not Rick seems to throw the already strung-out state trooper into a tizzy. By the end of the episode, he’s poised to do something maybe quite terrible with a hammer.

In other news: Jenny hatches a really bad plan, and Cassie gets thisclose to the missing women. Read on for the highlights of “Unfinished Business.” 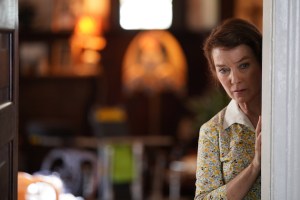 SPILLED MILK  | The news has finally caught wind of the Sullivan sisters’ disappearance (and Jerrie’s, though she’s not referenced by name). Ronald watches the report over breakfast, and Helen — who can tell something is up with her son — stares at him. “I don’t like to be looked at or talked to while I’m having my cereal,” he complains, and for a startling moment, Ronald and I find some common ground. “Young pretty girls… coincides with your urges. Do you have something to tell me, Ronald?” she asks. By way of an answer, he pours his full cereal bowl over her head.

I cannot tell you how much I love the way Valerie Mahaffey elegantly plucks a tissue from a box and delicately dabs at the sopping mess of Froot Loops or whatever that is now dripping from her head. It is poetry. She lets him know that she still believes there’s more good in him than bad — but the moment the scales tip the other way, she’ll do the right thing. And then Ronald, who’s just gotten a call from Rick that they’re going to hand off the captives to a different trafficking syndicate that evening, tells Helen that he will do “what is necessary.” 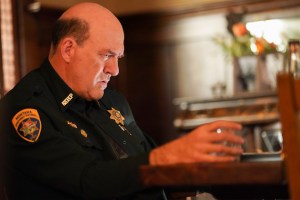 THERE’S NO ‘MOM’ IN TEAM | Later, at the All In, Legarski is on edge because Jenny has gotten her old boss, Sheriff Walter, to call Legarski to to Helena for a meeting. And when Ronald casually mentions that Helen is suspicious of him, the highway patrolman goes off. “I’m beginning to think you’re a loose end, Ronald,” raising his voice and insinuating that he’s ready to tie that loose end into a bloody knot. But the trucker isn’t worried, because he has what he calls an “insurance policy”: If anything happens to him, “the trail leads right to you.”

So Legarski goes to see Walt and MAGAs all over his office, triggered by the fact that Cassie (a 1) Black 2) woman) has filed a complaint against him. He’s all “Blue lives matter” this and “cancel culture” that until he leaves and runs into Jenny and Cassie in the driveway. What he doesn’t know: Cassie has planted a tracker on his SUV. 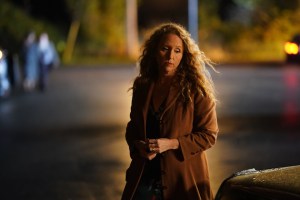 ALL SEWN UP | Meanwhile — and I do believe this may have something to do with the aforementioned insurance policy — Ronald visits the quilt shop belonging to Merilee Legarski, Rick’s wife. The trucker is full of compliments in a way that unnerves her yet ultimately charms her. (I’m going to overlook the fact that she gives him the “COVID discount” yet they are standing fewer than 6 ft. apart and no one wears, holds nor mentions a mask and GOOD GOD I LOOK FORWARD TO A FUTURE WHERE I DON’T HAVE TO BE BOTHERED BY SOMETHING LIKE THIS.) Anyway, he mentions that he’s a taxi dancer and that she should come by the weekly social dance event sometime, buys a quilt and leaves.

So she puts on a pretty dress and does. Eventually, they dance. He tells her that they’re both lonely, but he’s not looking for anything, because he’s been hurt before.

FESTERING SITUATION | In their prison, Danielle and Jerrie are very worried about Grace, whose wound is infected. She has a high fever and has come up with a plan that they’ll have to take some of the maggots from a can of HAMM and plant them in the wound in order to clean up some of the diseased tissue. Which is very smart and all, but Outlander has taught us that maggots are good for cleaning up dead tissue… not for quelling raging infections. So she gets worse, and after she pukes on Ronald during a visit, he has Legarski come by with some heavy-duty antibiotics. He jabs them into Grace’s leg, then leaves. 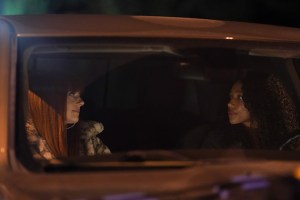 UNDERCOVER MOTHER | Working off the surveillance tapes from the night Jerrie went missing, Cassie and Jenny narrow the field of truckers that might’ve kidnapped the women. But then Jenny gets a hunch about the very first shady guy they happen across, so she immediately decides to pose as a prostitute in order to gain access to his cab and see what DNA evidence she can collect. (That sounds like a dumb double entendre, but it’s really exactly what she wants to do.)

But Jenny needs backup, so Cassie watches from a distance and swoops in when the trucker turns out to be a germaphobe who isn’t buying Jenny’s story that she’s actually a cop. He pulls a knife. She takes him down in the parking lot. He pulls a gun. Cassie swoops in. Both women are fine, and the guy gets arrested, but they’ve now essentially made a huge spectacle of themselves in front of a lot of drivers, right? What are the chances Ronald will hear about it soon?

SO CLOSE, YET SO FAR | When Merilee comes home, Rick angrily demands to know where she’s been. So she tells him. “I’m not having an affair. No such luck. Just dancing, which I’ll settle for,” she says before she goes up to bed. Later, we see Rick walk upstairs menacingly, with a hammer in his hand. Guys, I don’t think he’s going to hang a picture frame with that thing.

Meanwhile, Denise lets Cassie and Jenny know that the tracker placed Rick at a spot in the middle of nowhere earlier that evening. So they go there, and wind up at the barn-looking thing where he and Ronald are keeping Jerrie, Grace and Danielle. Cassie and Jenny get inside and are literally standing directly above where the trio is locked up, but they can’t hear them screaming for help. So the two women leave without realizing how close they came to finding the very people they’re looking for.