Selena was an international music sensation, a Latina phenomenon who filled stadiums and won a Grammy. But before all that, she was a child singing in her family’s band, and that era is where Netflix’s Selena: The Series spends most of its premiere.

In a moment, we’ll want to hear what you thought about the bio-drama’s premiere, which began streaming (along with the rest of the nine-episode first season) on Friday. But first, a quick recap:

In 1995, a crowd clamors for Selena (played by Christian Serratos, The Walking Dead) outside her tour bus. Inside, the 20-something says, “I can’t do this.” She’s on the cusp of mainstream stardom, but it’s going to mean moving ahead without her bandmates/siblings A.B. (Gabriel Chavarria, The Purge) and Suzette (Noemí Gonzalez, The Young and the Restless). They boost her spirits and tell her she’s not losing them. That night, she performs her hit “Como La Flor” for a rabid American audience. 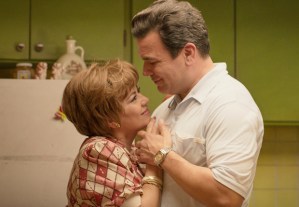 After a brief flashback to Selena’s birth in 1971, we land in 1978. The Quintanilla family — in addition to the kids, there’s dad Abraham (Ricardo Chavira, Desperate Housewives) and mom Marcella (Seidy Lopez, Resurrection Boulevard) — starts to form a family band after Abraham realizes that his younger daughter has quite a set of pipes. Suzette has to be cajoled into playing the drums, but pretty soon they’re set up with Abraham on guitar, A.B. on bass and Selena on lead vocals. 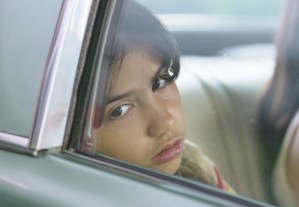 Their primary venue is the family restaurant, which goes under when a recession hits. Eventually, the family relocates to Corpus Christi to live with relatives and save money. It’s there that Abraham realizes that, rather than old covers, audiences respond well to songs with Spanish lyrics. “People will pay to hear music that speaks to them, to who they are inside,” he tells his daughter (who in these early scenes is played by Madison Taylor Baez).

So the band changes its name from Southern Pearl to Selena y Los Dinos, and little Selena — who was born in Texas and doesn’t speak Spanish — starts to learn a new language. The next thing we know, Selena y Los Dinos (featuring Serratos as Selena) is killing it at a gig in 1984, performing Tejano music to a very entertained crowd.

Now it’s your turn. What did you think of the premiere? Grade it via the poll below, then head to the comments to elaborate!