Warning: As the headline suggests, the following contains at least one big spoiler for Thursday’s Grey’s Anatomy. Proceed at your own risk.

OK, Grey’s Anatomy promos, you definitely got our attention by teasing that, as Meredith lingered in limbo in Thursday’s episode, “another person from her past” would return. Would it be Lexie? George? The MerDer baby that Grey miscarried in Season 6? No comeback could possibly top Derek’s for sheer shock value. But did the ABC drama manage to come close-ish? If you don’t already know, read on and find out.

‘MORNING, MEREDITH’ | As “You’ll Never Walk Alone” began, the pandemic continued to tear through Grey Sloan. During a debriefing, Richard assured his colleagues that Mer was in good hands with Teddy and DeLuca. Owen warned that the hospital should prepare for more coronavirus cases. And Koracick, Zooming in, insisted that his test had been a false positive. In the doctors’ lounge, Jackson invited Jo over in case she didn’t feel like being alone. OK, because he didn’t feel like being alone. “I have fancy beer and a negative COVID test,” he noted. So why didn’t they do a friendship reboot? Deal, she said. A Dr. Quo of the Catherine Fox Foundation was running a trial with room for two more patients, we learned, and Teddy and DeLuca were eager to sign up Mer. Richard, however, would only agree to think about it. When Nico approached a patient who visibly freaked at the prospect of being treated by an Asian doctor, he took it in stride. Soon, he was assigned to treat Dave, who was back at Grey Sloan after previously being treated by Owen. And while all of this was going on, Mer, at least in her mind, was on her magic beach. “Excuse me,” she called out. Aww… to George!!! They got T.R. Knight. Even if you didn’t wanna cry at that point, admit it: You know you did.

When Taryn showed up at Koracick’s to perform his new COVID test, he wouldn’t allow her in. He didn’t let residents in his house or up his nose. “Are you plotting something evil?” she asked upon seeing a complicated screen in his house. On the contrary, he replied. He was trying to stop a pandemic. During a call with Winston, Maggie was encouraged to seize joy wherever she could find it. “I don’t mean to tell you how to be,” he hastened to add. But she hadn’t taken his advice the wrong way. And she was looking forward to their virtual dinner that night with his auntie. While treating Dave, new resident Mabel Tseng diagnosed him and got an invitation into the O.R. by Owen. While Jackson and Jo tried to assure themselves that Mer was gonna be OK, George was complimenting Grey on her kids. He hadn’t met them, but “I check in sometimes.” When she pondered why he’d gotten older in her head, he ventured that it was perhaps more peaceful for her to imagine him that way. Did she get to choose if she went back? He hadn’t gotten to, he said. It’s different for everyone. At the same time, Richard was telling Bailey that he’d tried to wake Mer to ask if she wanted to enroll in the trial. But if he’d really tried, he hadn’t done so very hard. 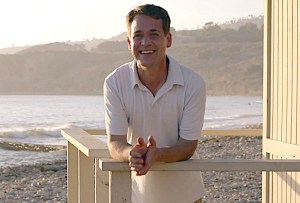 ‘YOU WERE ALL CRACKING UP AT MY FUNERAL’ | During Maggie and Winston’s dinner with his auntie, his father called in, much to his surprise. It was awkward with a capital A. “Let’s try to be civil,” said Dad. But that wasn’t going to be easy, considering that he’d apparently gambled away any money that the family had had. Soon, Winston had abruptly hung up, leaving his girlfriend on the line with his aunt and father. The morning after Jackson and Jo’s friendship reboot, she decided to rip off the Band-Aid and lunged in for a kiss. This hookup was apparently going to go way better than the last attempt. Back on the beach, Mer suggested to George that her kids would go on if she died, just like she had after he died, after Derek died. George’s mom hadn’t done that, though, after his passing. She was still around, she just wasn’t the same. Sometimes he tried to shake the sadness out of her. “Like you haunt her?” Mer asked. Not exactly. At Grey Sloan, DeLuca argued passionately to get Grey into that trial. The choice, he told Richard, is between doing nothing and doing something. “Do something!” Live up to the responsibilities that she gave him.

After treating Dave, Tseng suggested to Nico that Owen hadn’t tested for right-side diverticulitis because… as Kim put it, Hunt was a racist. Or that was what he was going to hear her accusing him of, anyway. Instead of letting her address the issue with Owen, Nico wound up doing so himself. Back at Jackson’s, Avery and Jo made excuses for why they could keep having sex without becoming a “thing.” Basically, if they didn’t stop getting it on, it only counted as one incident. When Taryn made it back to the hospital after gaining new — bleak! — insight into Koracick’s state of mind, she reported to Teddy that he was in a dark place and could probably use a friend. Oh, Hellmouth, any friend but Altman! Later, Jo tore into Levi for hooking up with Nico. “It’s wartime,” he declared. Desperate times, desperate measures. Speaking of desperate, Amelia lit into Link for trying to remain optimistic and warned that he wouldn’t like the consequences if she kept stuffing down her feelings. In response, he sat near her and explained that he was making space for her to have her feelings — rage, fear, all of them. 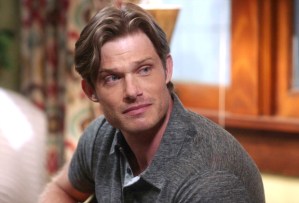 ‘DO YOU STILL DANCE IT OUT?’ | At the beach, Meredith admitted to George that she didn’t dance so much anymore, not now that Cristina was gone. Suddenly, Grey heard Richard’s voice and saw him beside her. He didn’t know what to do for her, he admitted. In her hospital bed, Meredith began to shake, almost as if she was having a nightmare. When Richard left the room, he’d made a decision: “Get her in” the trial, he told DeLuca. As the episode neared its conclusion, Levi wanted to invite Nico over but noted that they hadn’t been great to each other, so maybe that was a bad idea. There was a pandemic going on, Nico replied. “A lot has changed.” Ugh. But not enough to justify a Schmico reunion. “No,” I cried as they took off to get busy at Jo’s empty place. Speaking of Jo, Jackson pressed “pause” on anything that was going on or might go on with them. Which was fine with her. “What I need is friendship and sex,” she said. She wasn’t looking for a relationship, least of all with someone like Mr. Can’t Be Alone. These two are actually pretty hilarious, no? “You thought I wanted to date you?” she asked, incredulous. Off Nico’s strong words, Owen admitted to Bailey that with Dave, he’d defaulted to the diagnosis that he would’ve given a white patient. He just wanted to treat everybody equally. Ah, said Bailey, who was worried about her parents, whom she’d just put in assisted living. But “equal doesn’t work for everybody.” If a protocol isn’t working, he had to change it.

After giving Amelia room to spiral, Link just wanted to play his guitar. But she wanted to talk. So he did, recalling his decision to focus on the positive while at cancer camp as a kid. And it worked for him. “If you need a partner in misery, I’m not your guy,” he said. On their evening Zoom call, Winston apologized for leaving Maggie with his father and aunt, and opened up, at least a little, about his dad’s temper. But what he really wanted to do was watch Coming to America with her. Though Teddy knew that she was the last person Tom wanted to see, she still showed up on his doorstep with soup. He didn’t answer, perhaps because that was the sane thing to do, perhaps because he was shivering on the floor on the other side of the door, perhaps a little bit of both. Back at the beach, Mer noted that George had gone all in for everybody, even that fateful woman at the bus stop. He’d changed Mer’s life. Which hopefully would go on. At Grey Sloan, Bailey told Richard that she thought he was making the right decision putting Grey in the trial. He’d never thought before about how helpless the loved ones of COVID patients must feel. Now, it seemed, he’d never forget. In our last scene, both Bailey and Richard were on the beach with Mer and George. Find you people, voiceover’d Grey, because when you’re at your lowest, they’re the ones who’ll get you through.

Grey’s vet T.R. Knight — an Emmy nominee during his original run — commented on his encore, saying, “George O’Malley will always claim my heart. Thank you to Ellen [Pompeo], Chandra [Wilson], Jim [Pickens], Krista [Vernoff] and all the familiar faces for once again sharing your beautiful light.”

So, what did you think of “You’ll Never Walk Alone” and Meredith’s reunion with George? Also, they wouldn’t really kill off Koracick, would they? Hit the comments.