The biggest danger Eddie faces in this week’s A Million Little Things has nothing — or maybe everything? — to do with the car accident he suffered in the Season 2 finale.

The hour chronicles Eddie’s challenges as he adjusts to life at home in his wheelchair. At first, these seem annoying but minor: He’s got to grab mugs with the help of a spatula handle, for instance. But when Katherine and Theo leave for work and school… and Eddie realizes both his chair and his phone are on the opposite side of the room from where he’s sitting… it quickly becomes apparent that Eddie actually needs the help he’s insisted that he doesn’t.

When Gary swings by after picking up Theo from school, he finds Eddie dejected: He peed himself because he couldn’t get to the bathroom alone. Being the true friend that he is, Gary pretends to spill a glass of water on his pal so Theo won’t know what happened (side note: Guys, Theo always figures out when he’s being lied to!). But in the aftermath, Eddie nearly cries as he admits to Gary that he’s in a lot of pain and is growing tired of trying to pretend everything is OK.

Gary knows he’s gotta do something to help Ed navigate his new reality, so he calls Rome and the three meet up for their usual Friday basketball game. Eddie complains the whole way there — he’s in a wheelchair! he keeps reminding them — but the guys rag on him like they always do, and after he stops feeling sorry for himself, he actually manages to enjoy himself and sink a basket.

Back at home, Katherine finds the pee pants in the hamper and starts to freak out about how she can’t go back to work in the office because all she’ll do is worry about Eddie all day. But he promises her that they’ll get a home health aide to help out. And then Darcy, who’s visiting with Gary, says that she’ll make room in her schedule to be Eddie’s physical therapist — even though earlier, she told Gary that her loyalty to Katherine (and seeing how much Eddie’s infidelity wrecked her) would make that impossible. When Gary wonders why she had the change of heart, Darcy says, “I’m not doing it for him. I’m doing it for Katherine.” 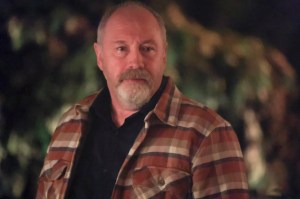 BUT THEN… Later on, Katherine, Theo and Eddie are playing ping-pong on their new set when the doorbell rings. Theo goes to get it, and Alex’s dad is standing there. When Katherine comes over to see what’s going on, the pastor says he’s got the wrong address and starts to back away. “You’ve got a nice kid there,” he says before he goes. “Make sure you enjoy every moment.” Which on its face is a nice thing to say… but it comes off as creepy at best and threatening at worst. Is Pastor Alex’s Dad plannng to take a(nother) whack at Eddie?!

Elsewhere in the Friends of Jon: 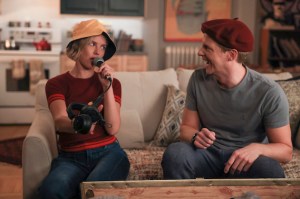 * Maggie and her Oxford roommate Jamie bond with a little prop comedy (it’s a long story), and he winds up confiding in her that he doesn’t like therapists because a grief counselor he saw after his mom’s death shared something confidential with his father.

* Rome meets with Shanice, a famous and exacting actress he’s courting to play the role of Regina in his movie. But the real Regina is hurt that she feels like she’s grieving the loss of their son alone. When she confronts Rome, he explodes that he’s angry she tossed out of all of the baby’s stuff 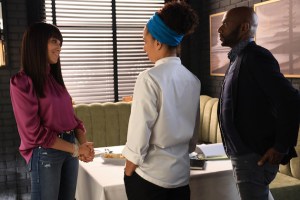 without even asking him if he was OK with that, and he’s angrier at the fact that they could be parents if it weren’t for her changing her mind. She eventually reveals that she put the infant paraphernalia in storage — so it’s not gone — but they agree that they’re not on the same page, and it’s rough.