“90210 was way more interesting behind the scenes than it was in front of the camera,” Shenae Grimes Beech says in the surprisingly juicy ET Presents…9021OMG! The Cast Tells All special, now streaming on CW Seed.

We say “surprisingly” because, as you may recall from TVLine’s breathless coverage, Beech already wrangled her costars for a virtual get-together in April. How many new stories could they possibly have to tell? … As it turns out, plenty.

Naturally, the cast has a lot of fun reminiscing about the show’s complicated behind-the-scenes dynamics: “We were kids,” Jessica Stroup says. “We literally grew up together. We were family, and we fought like family.” Adds Jessica Lowndes, “And I stayed out of all of it!” (Hey, as The Real Housewives of Salt Lake City‘s Whitney Rose recently opined, “Everybody needs a Switzerland.”)

Referring to her not-so-alleged feud with Beech, AnnaLynne McCord admits that “tempers flare” and “things go crazy” when you’ve been working long hours on set. “I wanted to strangle that chick,” she says, now able to laugh about petty disagreements from another lifetime ago. “I’m so grateful that in the last 24 hours of [shooting] 90210, Shenae and I fully repaired our relationship issues. I ended up at her wedding in England!”

Now that we’ve gotten the drama out of the way, let’s break down some of the more fun moments from the 90210 reunion special:

* Hilary Duff was originally offered the role of Annie Wilson, so as Beech recalls, “I’d been lying in wait for a month thinking 100-percent this was not going to happen. To say that I was ecstatic would be an understatement. I could not believe I was seeing my picture next to Hilary Duff’s all over the internet.”

* Trevor Donovan acknowledges that, even by CW standards, he was “exceptionally old” to be playing a high school student. He briefly addresses the negative backlash he received on social media for being cast as a teenager at 30, before noting that Michael Steger was 29 when he was cast. Ryan Eggold, meanwhile, was only 25… and he played their teacher.

* Though Dustin Milligan isn’t interviewed for this special, the topic of Ethan’s abrupt departure between the show’s first two seasons is briefly addressed. Echoing things we’ve heard in the past, the exit is attributed to “creative differences.” The producers wanted to take the role, originally developed as comedic, in a more dramatic direction, and it just didn’t work. (Well, we’d say it worked out for Milligan. Eh, Schitt’s Creek fans?) 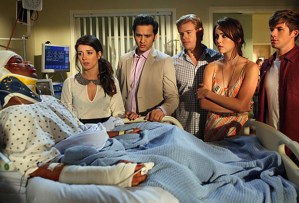 * Tristan “Mack” Wilds famously fell asleep while filming a hospital scene in the show’s fifth season premiere, and this reunion finally gives him the opportunity to explain: “The reason I remember that so vividly is because I was sick,” he says. “So I came on set, and they said, ‘You don’t have a lot to do. You just have to lay in the bed.’ And I was gone. Gone baby gone. Knocked out the park. Gone. I’ve never felt [worse] or laughed at myself harder than that.”

* Tori Spelling was excited to reprise the role of Donna Martin, but she regrets telling the producers that her character should now be an international fashion designer. “I screwed myself,” she admits in a new interview, recalling how nervous she was to have to speak in Japanese.

* Speaking of nerves, Olympian Ryan Lochte also gives a new interview about his Season 5 cameo. “I remember I was nervous because I did not know how to act or anything,” he says, remembering “a lot of retakes.”

* The special also touches upon Meghan Markle’s infamous appearance in the pilot, during which her character is seen performing [dot dot dot] on Ethan. “She was a lady, I was a gentleman,” Milligan says in a separate red carpet interview. “And that’s all I can say about that.” There seems to be some confusion about how long Markle’s character was meant to stick around, but as far as McCord is concerned, her days were always numbered: “[Markle’s character] was being a little ho with [Naomi’s] boyfriend, so we were never going to be friends.”

* We all know that 90210‘s planned sixth season would have involved a significant time jump, but the special includes a few more details we hadn’t previously heard. “We were going to get into the inner workings of Hollywood — the LA lifestyle,” Lanter says. Adds McCord, “Naomi had become, like, Olivia Pope on Scandal, and she was such a boss B. I read [the script] and I was like, ‘Yes!'” Even Wilds acknowledges, “It would have taken 90210 to the next level.”

Your thoughts on the latest 90210 reunion? Are you still hoping that we’ll get a proper ending for these characters someday, or have you made peace with where they left off? Whatever’s on your mind, drop it in a comment below.