Contestants dropped like mics as The Voice’s Season 19 Knockouts continued Monday. Five — count ’em, five — would-be winners were sent packing. Well, at least if you include the one poor guy whose performance was entirely cut from the show. Read on, and we’ll go over all of the KOs that we got to see and hear in full, then you can sound off about the coaches’ picks and whether the ear-cleaning I gave myself after panning Payge Turner’s performance last week did any good.

Team Kelly: Desz performing “Can We Talk” (Grade: A) defeated Sid Kingsley performing “Make It Rain” (Grade: A) — Sid stolen by Blake | Once Desz adorably got over the fact that Usher’s eyes really do sparkle — of course she snorted — she impressed him with the fact that she could go as low as a tenor. Newly-stolen Sid tackled a Foy Vance number I’d never heard but immediately loved; damn, that was hot — and it was flippin’ perfect for Sid’s raspy voice. Usher advised him to divide his soulfulness between his voice and his piano-playing. On stage, Desz delivered a fantastic performance. She had the presence, the voice, and holy crap! That key change! She wasn’t just living the moment, she was loving it, and her joy was contagious. I was like, “Good luck, Sid.” But he did not need any luck. The minute he opened his mouth, smoke came out. There shoulda been steam coming off that man, because his vocal was as hot as an Atlanta sidewalk in August. Personally, I preferred his gutsy, bluesy performance to Desz’s, fun as hers was, but I assumed she’d get the win; she was more of a crowd-pleaser. What a relief that Sid got stolen, electing to go with Blake instead of former coach John. Sid’s whole vibe kinda reminds me of the True Blood theme song.

Team Blake: Jim Ranger performing “Humble and Kind” (Grade: A) defeated Jus Jon performing “Finesse” (Grade: B-) | Before bringing in his contestants, Blake explained that he’d paired them in a Knockout because, despite being in very different lanes, they were his most soulful team members. Jus Jon was especially nervous, what with singing in front of his idol and all. Usher advised him to incorporate into his performance more variation and “grease.” He also rhymed a great many of his suggestions: “Don’t hide it, divide it,” he recommended. (Has he always done that?) “Jim is a jam,” Usher decided after hearing him run through Tim McGraw’s classic. What most impressed me was that I didn’t hate it, being as enamored as I am of Addison Agen’s Season 13 version; Jim made it his own in a way that made it feel like a whole different song. When it was go time, Jim nailed it. Also stapled it, taped it and sutured it. He started off lovely and soft, inviting us in, so by the time he got big and raspy, he had us floating on every note he sang. Absolutely winning. When it was Jus Jon’s turn, bless his heart, he was a lil’ stiff. He loosened up toward the end of the Knockout and started to look like he was having fun, but I figured by then, he’d already lost. His voice was strong and clear, and didn’t falter no matter how much he moved around, but it didn’t feel… special. If Jim hadn’t had it in the bag, he surely would’ve turned the tide when he choked up explaining to the coaches what the song meant to him and his “knucklehead” boys. 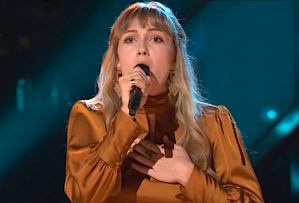 Team Legend: Bailey Rae performing “Let Me Down Easy” (Grade: A-) defeated Lauren Frihauf performing “Cry Baby” (Grade: A) | In rehearsal, it sounded like Bailey had chosen herself an ideal number. John’s only concern was that she wasn’t physically telling the story that she was singing. Lauren, on the other hand, had picked a song that didn’t play to her strengths; she’s sorta sweet-voiced, and heaven knows “sweet” isn’t the word you automatically associate with Janis Joplin’s hits. So John and Usher tried to help her rearrange the number so that it would suit her better. Under the spotlight, Bailey sounded record-perfect, but the only new physicality she seemed to put into her performance was moving her free hand with pretty much every syllable she sang. It didn’t matter, though; she was as solid as the broad side of a barn. When it was Lauren’s turn… well, all right. She made me look up and lean in. There was a cool Cowboy Junkies vibe to her verse that set her up nicely for success on the bigger chorus. Was she actually winning this thing? To my astonishment, she was. Bailey is probably the stronger, better vocalist overall, but Lauren’s performance was way more interesting. It wasn’t perfect, but the little bits of raucous messiness in it worked — like they were a tribute to Janis that only Lauren could’ve made.

Team Blake: Ian Flanigan performing “Beautiful Crazy” (Grade: B) defeated James Pyle performing “In My Blood” (Grade: B+) | Ahead of Ian’s run-through, he told us that working the bar scene, he’d “created a lot of alcoholism in my life” before meeting his partner. Blake advised him not to drop lines before the lyric is finished, and Usher recommended that James not get ahead of the beat. Up first, Ian took us, as he’s wont to do, right to two in the morning at the saloon on the outskirts of town. It wasn’t the showiest performance ever, but there was an intimacy to it that worked in Ian’s favor. And I’ll be damned if it didn’t sound like he was singing some of the more urgent lines directly to his partner. When it was James’ turn, wow, he did the hand thing even more than Bailey Rae had. But his performance was explosive. He didn’t so much sing the chorus as expel it from his body. If I was only judging based on this Knockout, I might keep James, but if I were Blake, and knowing what Ian is overall capable of, I’d have chosen to keep him. “Do you drink boiling water?” Blake asked him. That was how unique his voice was. Ya just don’t let that go. 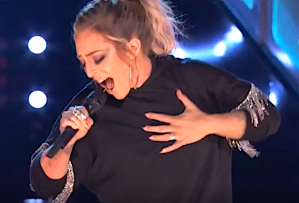 Team Kelly: Madeline Consoer performing “Die From a Broken Heart” (Grade: A-) defeated Kelsie Watts performing “You Oughta Know” (Grade: B) | When Madeline realized that she’d be competing with Kelsie, she admitted that she got in her head. Couldn’t say I blamed her; Kelsie is a vocal beast! But there was something about her Alanis run-through that wasn’t working. Maybe it was that her voice was so pretty, so perfect, it didn’t sound angry enough? Madeline sounded like enunciation was going to be an issue. Usher challenged her to be more emotional in her performance, even if it took her back to her own heartbreaking past. Basically, the same problem as Kelsie was having: It wasn’t about the notes, it was about the feeling. On stage, Kelsie sang through a perfect sneer and very much “acted” the song. And on one hand, it worked: I couldn’t take my eyes off her; her rage was palpable. On the other hand, it didn’t work: That rage felt manufactured, like an Atlantic City revue, not an authentic rock performance. All in all, it was like a cake that coulda used an extra 10 minutes in the oven. It just wasn’t quite… done. When it was Madeline’s turn, she sang with a beautiful clarity that instantly made me say, “Well, hello!” Her number was far less bombastic than Kelsie’s, but it was a much better showcase for Madeline’s vocals. And the vulnerability that she managed to display, I thought, had to have clinched the win. I believed Madeline here, I didn’t believe Kelsie.

Team Gwen: Carter Rubin performing “You Say” (Grade: A+) defeated Chloé Hogan performing “Weak” (Grade: A-) — Chloé stolen by John | Carter shared in rehearsal that he’d chosen Lauren Daigle’s song because it spoke to him as a kid who’s a little different and who’s been picked on for that fact. (Dang, that kid is poised, huh?) Music teacher Chloe explained that she’d chosen SWV’s classic in part because it was so significant in the history of Black music. Usher advised her to be more relaxed and dynamic in her vocal. “If you’re in your head,” he said, “you’re dead.” In the moment of truth, Carter turned out a performance that was so polished, powerful and well-thought-through, it made me wish that Voice contestants more often went on to become superstars. He was spectacular. “I can’t breathe,” Kelly gasped afterwards. He was that good. When it was Chloé’s turn, she brought to the fore a vocal that was as silky as anything hanging in the wardrobe department. I was in the middle of typing her downfall was probably going to be that she showed less range than Carter when… boom, she changed on a dime and went big. In the end, this was a much more dynamic Chloé than I’d seen/heard before. This was a potential contender. Still I didn’t think she could compete with Carter. As John noted, her song was, in a way, not built for this competition. And I doubted that I was the only one listening who could’ve said what Kelly did about Carter’s performance: “It broke me in the most amazing of ways.”

Dispatched in the briefest of cutaways — argh, what’s the hurry? — Joseph Soul defeated Van Andrew to remain on Team Gwen. And while we got to hear Gwen’s thoughts on the victor’s performance, we didn’t get to hear so much as a note of Van singing. (Good Lord, how bad could he have been?)

What did you think of Monday’s Knockouts? Vote for the standout in the poll below, then hit the comments with the elimination that stung the most. (Kelsie for me, even though her Alanis was kinda a “You Oughta Know”-go.)