The Voice’s coaches could feel their power slipping through their fingers in Tuesday’s kickoff of Season 19’s Knockouts. After this round is over, the fates of the contestants would be in the audience’s hands. So Blake Shelton, for one, was going to savor his last chance to “make the decisions that make the difference — whatever that means.” In his case, it meant making a boneheaded choice that might ultimately have helped significant other Gwen Stefani take another big step toward her first win as a coach. Read on, and I’ll explain how.

Team Legend: Tamara Jade performing “Higher Ground” (Grade: B) defeated Casmé performing “Wrecking Ball” (Grade: C) | First of all, I dunno how the contestants didn’t strain their vocal cords screaming at the sight of Mega Mentor Usher. Beyond that, I wasn’t sure how smart it was of Casmé to change lanes to do Miley’s pop-rock hit. In real life, fine and dandy. But on The Voice, it might have been shrewder to give viewers what they expect (and presumably want) from her? Then again, Tamara’s song choice didn’t sound in rehearsal like a slam dunk, either. When she took her place behind the mic, there was no denying the power of her pipes (or her range — love that lower register). But more than her vocal, which was good but messy, what really sold her performance was her showmanship and the energy that she brought to the stage. (For that part, I’d give her an A.) Up next, Casmé started out giving what for me was a demonstration of what can happen when a singer steps out of their comfort zone: She sounded… well, uncomfortable. She was so off, I felt bad for her watching the second half of the number, knowing that it was destined to be her swan song. Great singer, unpolished vocal, bad choice.

Team Gwen: Payge Turner performing “Creep” (Grade: C+) defeated Ryan Berg performing “Makin’ Me Look Good Again” (Grade: B+) | In rehearsal, Usher and Gwen advised Payge to not just sing Radiohead’s classic but to really act it out… put the entirety of her body into it. As for Ryan, they wanted him to push less hard to allow the subtler qualities of his voice (and that surprising falsetto of his) to come through. In the moment of truth, Payge sounded a lil’ dicey at first, but her performance was captivating. As she went on, she definitely let her freak flag fly, and hit some nice long notes. But overall, her performance felt… unperfected. Not as in she was trying to be raw and wild and unpredictable but more like “Crap, I’m not sure where to take the line after this.” It was… wobbly. When it was Ryan’s turn, he was well-served by the low-key storyteller vibe of his Drake White number. It really shone a spotlight on his appealing rasp and the showmanship that the shy guy best brings to the table during a more intimate performance. Personally, I prefer Payge, but I thought Ryan definitely won that Battle. I got what Payge was going for, she just didn’t quite achieve what she was going for, not vocally, anyway. 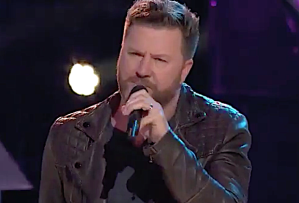 Team Blake: Worth the Wait performing “Delta Dawn” (Grade: A-) defeated Ben Allen performing “She Got the Best of Me” (Grade: A) — Ben stolen by Gwen | Running through his Luke Combs cover, Ben sounded pretty much unbeatably country; I had a hunch that the novelty of having a trio on the show was about to wear off. WTW’s prospects didn’t improve any when Blake dinged them on flawed harmonies in rehearsal. On stage, Ben reminded me of exactly why I’d given him the top spot in Season 19’s Best of the Blinds countdown; he’s so country, he probably even snores with a twang. And if his voice was any richer, it’d be on the cover of Forbes magazine. Final Four for sure. When it was Worth the Wait’s turn, it sounded like they’d definitely worked out any kinks in their harmonies. But they were stronger together than apart. Only Mia — at least I think her name is Mia, the sister in the middle — really sounded like a star. Gorgeous performance, though, and, in John’s estimation, their best to date. Still, I’d have gone with Ben; he could really win this thing — which maybe explains why Blake chose Worth the Wait, to give his fiancée a better chance at victory?

What do you think, Voice fans? Would you have kept Ben or WTW? And wasn’t Payge as distractingly off as she was wonderfully weird? On your way to the comments, vote for your favorite performance of the night in the poll below.