A group of ill-prepared British nuns attempt to establish a convent in a possibly cursed palace at the top of a mountain in the Himalayas in the 1930s — what could go wrong?

Answer: A lot, in both the physical and metaphysical realms. However, Monday’s broadcast of FX’s Black Narcissus, a limited series from Amanda Coe (BBC One’s The Trial of Christine Keeler), takes its time letting us know that the stalwart women trying to secure an outpost for their order are in over their wimple-clad heads. (Editor’s note: This recap covers the first hour of the three-part drama.)

The series, which is based on Rumer Godden’s 1939 novel, opens with the camera roving around a stately home in Mopu, Himalayas, in 1914. There are people everywhere, all seeming to enjoy themselves greatly… except for a baby screaming in a bedroom, and a young woman (possibly the child’s mother?) also in tears nearby. When an older woman enters to deal with the baby, the distraught woman flees the room and quickly makes her way up a precarious staircase on the side of the building; the wind whips her hair around as she looks down. The palace is cut into a cliff, meaning that one wrong step on the staircase means she’ll fly down to her death. As she ascends to a bell tower, however, it seems like that might be her desire: When she reaches the palace’s highest point, right before the scene fades, it certainly looks like she’s about to jump. 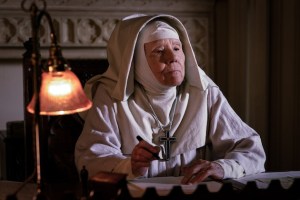 Twenty years later, Sister Clodagh (Gemma Arterton, Lost in Austen) is the youngest sister superior in the religious order of St. Faith. When Father Roberts (Jim Broadbent, Game of Thrones) is too ill to travel, Clodagh champs at the bit to lead a delegation of sisters from Darjeeling to set up a nunnery and school in the palace, which used to house a rich man’s mistresses and which that man’s son, a general, has donated to the Church. Mother Dorothea (Diana Rigg, Game of Thrones) warns Clodagh that she’s too ambitious, but grants her leave to go and take Sisters Briony, Philippa, Blanche and Ruth (Game of Thrones‘ Aisling Franciosi) with her. 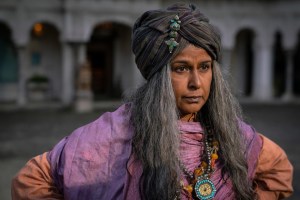 After an arduous journey over breathtaking terrain, the women arrive in Mopu. Right from the start, the place feels eerie. The always-whistling wind makes windows and doors burst open or shut with no notice. Sister Ruth seems to be hearing whispers around corners, even when no one is there. And Angu Ayah (Nila Aalia, A Discovery of Witches), who serves as the palace’s attendant and was the woman we saw attending to the baby 20 years ago, says the weirdness isn’t in anyone’s head: The ghost of Princess Srimati, aka the woman poised to jump in the flashback, is “hungry” and is definitely hanging out in the palace.

Clodagh is determined to make a go of it, which means she sometimes has to rely on the general’s rakish, cynical right-hand man Mr. Dean (Alessandro Nivola, Doll & Em) to fix the building’s plumbing and facilitate relations with the locals. Dean and Clodagh’s verbal sparring is very opposites-attract; is it any wonder that she starts to have flashbacks to her pre-convent life — complete with skinny-dipping and kissing a man who asked her never to cut her hair — soon after they meet? (As part of Clodagh’s vows, she and her sisters shave their heads, do not touch and have not seen their reflections in mirrors in years.)

Of everyone, Sister Ruth seems the most affected by being in the foreign environment. She suffers headaches exacerbated by the place’s altitude. She worries aloud to Clodagh that the palace doesn’t want them there. And one day, when she steals a glance in a mirror, she sees Princess Srimati’s face just over her shoulder.

Coincidentally — or maybe not — at the exact same moment, a local man helping with the gardening suffers a rather bloody injury to his belly. Clodagh orders Sister Briony to grab a suture kit, but Mr. Dean warns against interfering: If the man dies, he says, the people of the nearby village will blame the nuns. Dean also infers that something similar happened to the German monks who attempted to establish a monastery at Mopu the year before but abandoned the project after a few months.

Meanwhile, Ruth runs out screaming to Clodagh that she’s just seen the princess. Clodagh doesn’t have time for the acolyte’s hysterics — there is a man bleeding on the ground at her feet, after all — but when Ruth won’t stop, Clodagh slaps her to hush her up. The sister superior’s bloody handprint is on Ruth’s cheek and habit, and the local men who’ve witnessed the whole thing definitely know something hinky is up.

Now it’s your turn. Grade Black Narcissus via the polls below, then hit the comments with your thoughts!