Showrunner Tim Minear on Sunday shared what appeared to be an episodic of Ronen Rubinstein (Lone Star‘s T.K. Strand) and Oliver Stark (9-1-1‘s Evan “Buck” Buckley) along with the caption, “I wonder what that’s about?” Fans also did some wondering, including asking Minear if that picture was the real deal. “Oh, it’s real,” he replied.

Meanwhile, Brian Michael Smith (Lone Star‘s Paul Strickland) posted a second picture, revealing Paul to be holding the flashlight on the other side of the scene: 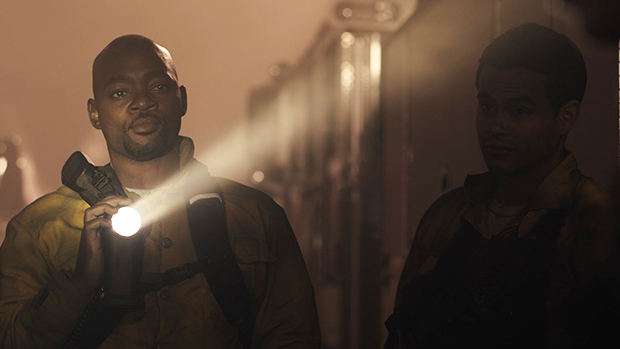 We knew that a meeting of the 9-1-1s was in the works, but this is our first official look at anything concrete. TVLine asked Minear in March if we’d be getting a crossover in the franchise’s future, to which he replied, “I believe you will.” Cryptic as always.

And although this marks the first meeting of major characters from the two shows, we’d be remiss if we didn’t mention that Erin Karpluk appeared as Pepper in Season 3 of 9-1-1 and the first season of Lone Star. (Trouble just follows some people wherever they go… especially when they cause the trouble themselves.)

9-1-1 and 9-1-1: Lone Star return with new seasons on Monday, Jan. 18 at 8/7c on Fox. Peruse the crossover pictures above, then drop a comment with your thoughts below. Which characters are you excited to see interact?